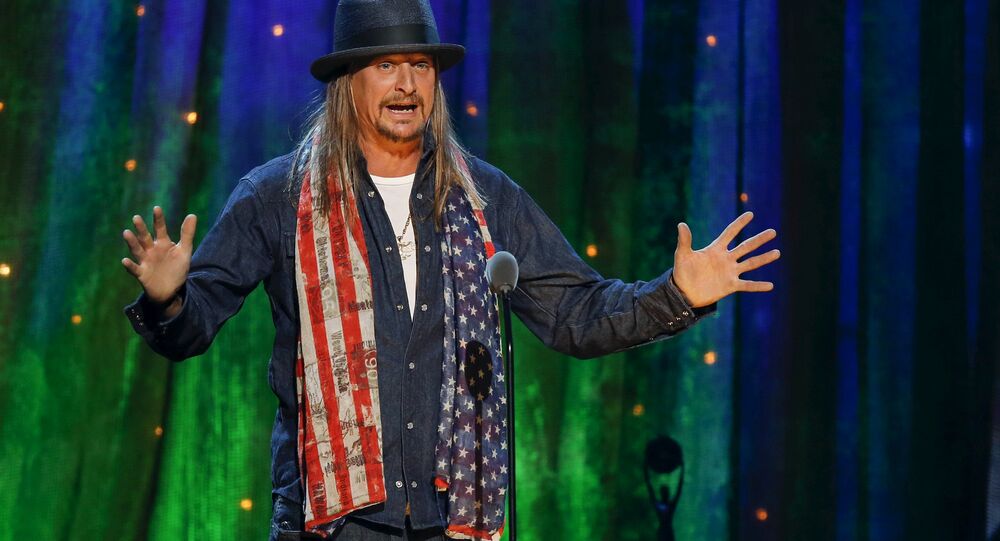 'American Bad A**'... Senator? Kid Rock Surges Ahead in Race for Michigan Senate

Kid Rock, of "American Bad A**" fame, announced his political bid in July, releasing a statement slamming his democratic opponent, and suggesting "hard-working Americans" were tired of politicians "like her" and "their bulls***!"

​Dismissed by many as a publicity stunt at best and hoax at worst, current polls show he beat Stabenow in a hypothetical head-to head match-up, if it were held now — his support stands at 30 percent to the serving Senator's 26 percent, while 44 percent of voters remain undecided.

The founders of this country never meant government to be run by "politicians", but by everyday citizens elected to represent the whole.

​While some US political figures couldn't contain their excitement at the news, others — in particular, Stabenow's campaign team — are likely scouring Kid Rock's history of controversial statements, and discography, for dirt.

Even a cursory glance will turn up a great bounty — over the course of Ritchie's three-decade career, he has written a panoply of songs about drug use, drinking and sexual exploits, often with prostitutes and strippers.

​However, his history outside studios and concert halls also provide a trove of ammunition for detractors — Kid Rock has starred in a sex tape, been repeatedly arrested for drunkenness and assault, and endured an acrimonious divorce from former Baywatch star Pamela Anderson.

In interviews with the mainstream media, incendiary statements fall as easily from his mouth as alcohol seemingly falls into it — he has slammed Beyonce (he prefers "skinny white chicks with big t***"), and same-sex marriage (he doesn't love anybody who acts like a "f***ing f*****").

​Some would be forgiven for thinking Ritchie's Senate bid was indeed a publicity stunt — after all, the website www.kidrockforsenate.com looks borderline parodic (it also contains links to his merchandise store), and was announced just prior to a new tour, as the singer released a new singles from his forthcoming album.

However, his popularity with many Americans cannot be denied — he has sold tens of millions of albums, amassing a great fortune in the process.

Moreover, he has always had a political streak, handing seven-figure sums to charity, helping local businesses, performing at philanthropic events, and capping ticket prices to his concerts at US$20 to ensure his poorer fans can attend.

​He also enthusiastically endorsed Mitt Romney in the Michigan primary in 2012, and Romney returned the favor by adopting Rock's patriotic anthem "Born Free" as his official campaign song.

While if and when Kid Rock does run for the nomination he will face a crowded field of competitors, it's important to remember President Donald Trump vied with 16 individuals for the presidential nomination, many of whom were established, well-regarded and well-financed — and Ritchie himself could capitalize on Trump's success, connecting with the president's successful coalition of conservative, pro-populist working class voters.

However, he still has a fight on his hands with Stabenow, a popular long-term senator who won in 2006 and 2012 by 15 and 20 percentage points respectively.

Michigan Man Tries to Take Out Beehive With Fireworks, Burns Down Garage Instead