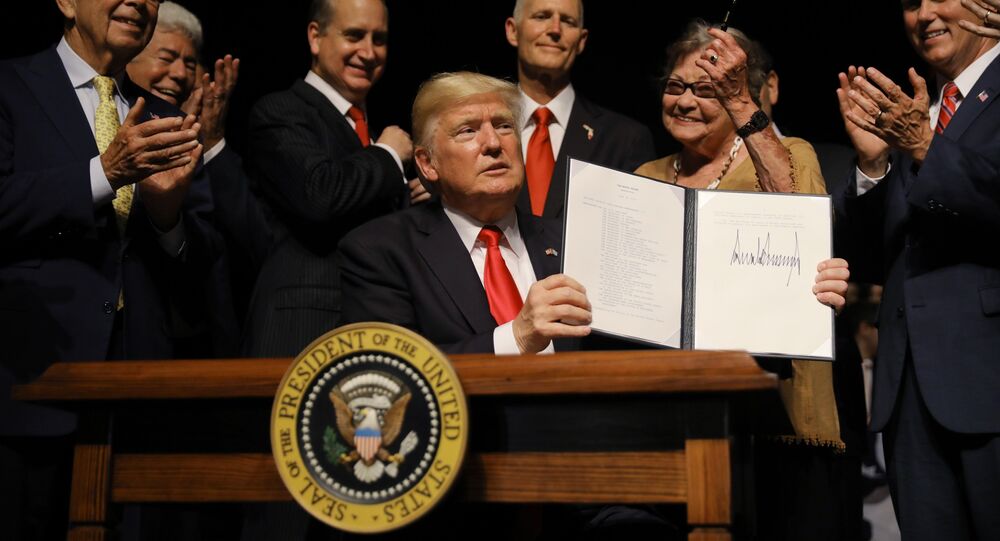 The US-Cuba relationship will at best improve gradually over years and only if Havana is willing to make concessions on human rights and political prisoners because President Donald Trump will continue to maintain a hardline while pushing free market and democracy reforms, experts told Sputnik.

© REUTERS / Enrique De La Osa
Trump Expected to Unveil Changes to US-Cuba Policy Next Friday
WASHINGTON (Sputnik) — Washington and Havana on Thursday will mark the second anniversary of the official restoration of diplomatic relations after more than 50 years of severed ties. The warming of relations came as a result of President Barack Obama’s decision in December 2014 to pursue a path toward normalizing relations with Cuba.

Trump, however, scrapped his predecessor Barack Obama’s initiative to develop diplomatic and economic ties to Cuba in order to repay a political debt to the community of anti-Castro exiles in Florida.

"We will not lift sanctions on the Cuban regime until all political prisoners are freed, freedoms of assembly and expression are respected, all political parties are legalized, and free and internationally supervised elections are scheduled," Trump said in a speech in Miami, Florida in June.

Last week, Cuban President Raul Castro criticized the new US policy, which excludes the possibility of continuing a bilateral dialogue or the implementation of the previously signed agreements between the two countries, but noted that Cuba nevertheless wishes to engage in dialogue with the United States.

Cuban officials warned in June that a reversal of Washington’s policy toward Havana would fail. Moreover, Cuba has hit back by accusing the United States of a huge number of murders and misconduct by its police as well as of illegal detention and torture of prisoners in the US detention center at Guantanamo Bay.

© REUTERS / Enrique De La Osa
Cuba Considering Possibility of Retaliatory Measures to US Sanctions
University of Kent History Professor George Conyne told Sputnik, however, that Trump’s tough talk needs to be taken with a grain of salt including his speech in Miami last week.

"First, in almost every policy area, what President Trump announces with high rhetoric one day is often forgotten by the next- or at least by the next time he mentions the subject. Second, the President's Florida speech was given to the remaining veterans of the Bay of Pigs invasion of 1961," Conyne explained.

Trump, he claims, knows the importance of "being filmed in cheering crowds and what we’re going to get that peculiar crowd excited were those particular remarks."

Conyne pointed out that soon after the State Department announced that there would be no changes implemented until regulations could be redrafted.

"That statement more than hints, it shouts of a more nuanced and subtle policy that the President announced," he argued. "So before anyone concludes anything, one better watch the drafting process and read and assess the results."

Conyne said he always thought American attempts at political and economic isolation of Cuba were "foolish" and that both the United States and Cuba would benefit from rapid normalization.

"I think a quiet policy of small improvements that add up to normalization over the long term, is the best for which we can reasonably hope under this president," Conyne said.

The professor added that he is encouraged about the long-term outlook of US-Cuban relations.

"No set of international negotiations that occur over this length of time, and after so many years of difficulties… are going to proceed without some reverses and problems. So far the problem s do not seems great," he said.

US policy towards Cuba should begin by pressuring Havana to move towards democracy and free markets, Senior Scholar at the Institute for Cuban and Cuban-American Studies at the University of Miami Dr. Jose Azel told Sputnik.

"I think the policy of the United States we always want that stands with the freedom and democratic reforms," Azel stated. "We should not be embracing brutal dictatorship of the Castros in Cuba. We should always be on the side of the people that are being oppressed."

US policy towards Cuba has traditionally been in defense of human rights and freedom, Azel added.

However, Obama abandoned the traditional US-Cuba policy framework and adopted that made unconditional concessions to the Cuban regime, Azel stated. He encourages the Trump administration to continue to uphold the United States’ previous strong stance against the regime.

"At least, right now the administration is saying yes people can travel to Cuba or can do business with Cuba provided that you don’t do with the Cuban military," Azel stated. "So I hope this policy has put an end to… asking for nothing in return."

Any efforts to improve relations between both countries will be depend on Cuba’s intentions to make advances in allowing political and economic reforms, Azel stated.

Trump Expected to Unveil Changes to US-Cuba Policy Next Friday