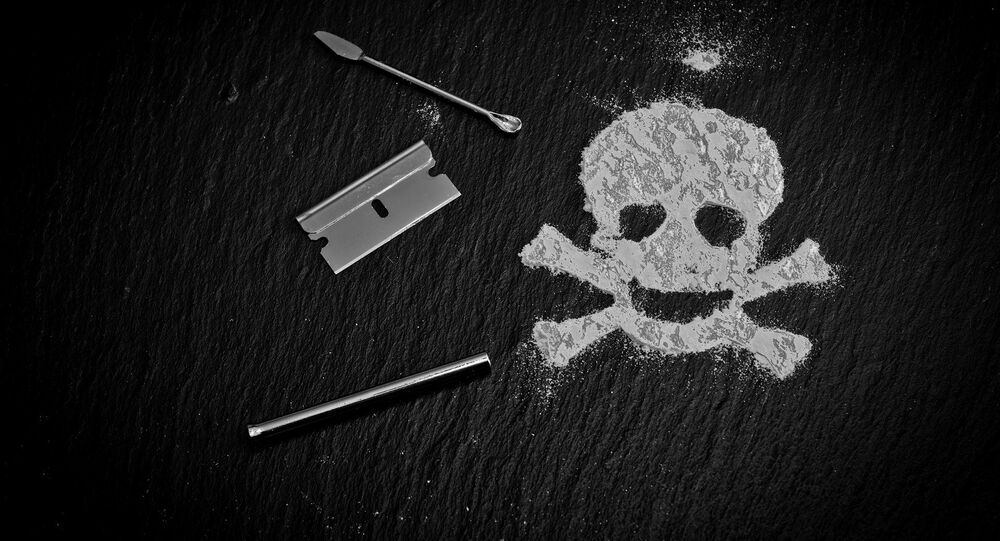 Over the past decade, the US working class has been decimated by the lack of job prospects, and a heightened availability of drugs, resulting in the US opioid outbreak currently undermining the labour market and economy.

© AP Photo / J. Scott Applewhite
US Republicans 'Must Work on 2018 Budget' Instead of Focusing on Healthcare Bill
Kristian Rouz — A stunning rise of opioid drug use in the US in the past several years has started to affect the labour market, consumer sentiment, and broader economic growth. Even though the US labour market is at ‘full employment levels', it is hardly producing any positive effects to be transmitted to the real economy, and the opioid pandemic is amongst the most prominent factors behind this.

A massive spread of opioids, most notably, crack heroin, amongst many US working class communities, has devastating effects to the quality of the US workforce, contributing to low labour participation rate and dismal low labour productivity, thus undermining President Donald Trump's agenda to ‘buy American, hire American'.

The strength of the US labour market has thus far failed to produce any substantial gains in salaries and wages, consumer spending, and broader economic growth. According to the US Labor Department, whilst unemployment rate is currently at its two-decade lowest at 4.4 percent, US labour participation rate (working age people who have a job or actively looking) is at its lowest since the early 1960s, at 62.8 percent.

According to a report by the US financial enterprise, Goldman Sachs, the use of opioid drugs is amongst the main factors devastating US workforce, primarily, the ‘prime age' men, who are unwilling or unable to work. The opioid epidemic has thus become a major concern for not only the US employers, struggling to hire enough workers, but also to policymakers and even central bank planners, concerned with the breakdown of transmission between the solid macro figures, and the still weak real economy.

© CC BY 2.0 / Kmccoy / United States Capitol
US Democrats Stall Senate Work in Protest Against Secrecy of Trumpcare
US labour participation hit its all-time highest in year 2000, at 67.30 percent, and held around 66 percent in 2008. However, after the outburst of the Great Recession and the entailing policy response, labour participation starter to rapidly decline, to 65 percent in 2010, 63 percent in 2014, and the rock bottom of 62.5 in mid-2015.

There are multiple reasons why the labour participation rate collapsed as dramatically during the post-crisis recovery. Amongst them were the Obama administration-sponsored creation of jobs that were mostly low-paying jobs, introduction of multiple social benefit programmes, and cheap credit, Yet, as the American worker felt increasingly disincentivised to work, not least due to the evaporation of well-paying mining and manufacturing jobs, the use of opioids demonstrated a stunning rise.

According to the Center for Disease Control and Prevention, the US are is currently in the midst of an "unprecedented opioid epidemic". Started Having started as prescription painkiller use and abuse back in the 1990s, the heightened opioid use has by now evolved into a sweeping pandemic, characterised primarily by the rising use of crack heroin by the ‘prime age' working class men.

"The opioid epidemic is intertwined with the story of declining prime-age participation, especially for men," David Mericle of Goldman Sachs said. The opioid pandemic entails "significant costs both to employers and the public sector," he added.

In early 2017, Federal Reserve Bank of Atlanta observed, some 1.8 mln American workers were not participating in the labour market because of "other", or unspecified reasons, meaning they are not pursuing education, disabled, taking care of a family member, nor retired. Out of these respondents, scome 881,000 people said they had taken an opioid-based drug the previous day. Thus, drug addiction is hampering the US labour market, and is part of the reason the US workforce is not at this point driving a robust economic expansion.

According to a separate report from the Substance Abuse and Mental Health Administration, about 2.7 mln working-age Americans practiced painkiller abuse in 2015, and another 236,000 were active heroin users. Albeit these figures are only a small portion of the 160-million US workforce, out of the roughly 7 million people currently out of work, opioid users constitute a significant share, between 30 percent and a half.

"Unemployment is associated with higher rates of tobacco use, heavy alcohol use, illicit drug use, alcohol use disorders, and illicit drug use disorders," a 2015 study (https://www.ncbi.nlm.nih.gov/pmc/articles/PMC4127107/) by a group of researchers led by Wilson M. Compton of the National Institute on Drug Abuse of National Institutes of Health, reads.

The rife unemployment that was a feature of the post-Great Recession United States has definitely played its role, but the spread of illicit drugs, on the one hand, and the rising demand for opioids amongst the American public, is a more complex issue.

© AFP 2020 / JIM WATSON
Pension Crisis? US Senior Employment Rate Hits 55-Year High
Disincentivised workers losing their jobs in manufacturing and energy and utilities sectors — the ones who haven't felt any improvement for almost a decade since the Great Recession- are easy prey to opioid dealers, heavily rooted in the distressed working class communities, mired in poverty and plagued by ethnic crime.

Now that President Trump is aiming to restore the US industries decimated by the years of weak recovery, and deal with drugs and crime, the amount of available workforce to uphold Trump's agenda is dismally low. How does one ‘hire American' when there's no one to hire left?

Now, even American workers out of work, but actively looking, are struggling to get a job. The reason, according to the Federal Reserve report: they failed a drug test.

"I do think it (crack heroin pandemic) is related to declining labour force participation among prime-age workers," Federal Reserve Chairwoman Janet Yellen said in her Congress testimony last week. "I don't know if it's causal or if it's a symptom of long-running economic maladies that have affected these (working class) communities and particularly affected workers who have seen their job opportunities decline."

Meanwhile, as US manufacturing has started to feel better recently, employers from the Rust Belt and other traditionally industrial regions have reported the lack of qualified workforce.

Now many US employers are unable to find workforce in the (mostly corrupted by the years of social benefit-fuelled idleness and devastated by drugs) traditional American working class communities. President Trump's agenda of resuscitating the US industries is facing a severe challenge, which can be addressed by the method of last resort: immigration reform.

Ecuador's Authorities Seize Over 50 Tonnes of Drugs in 2017