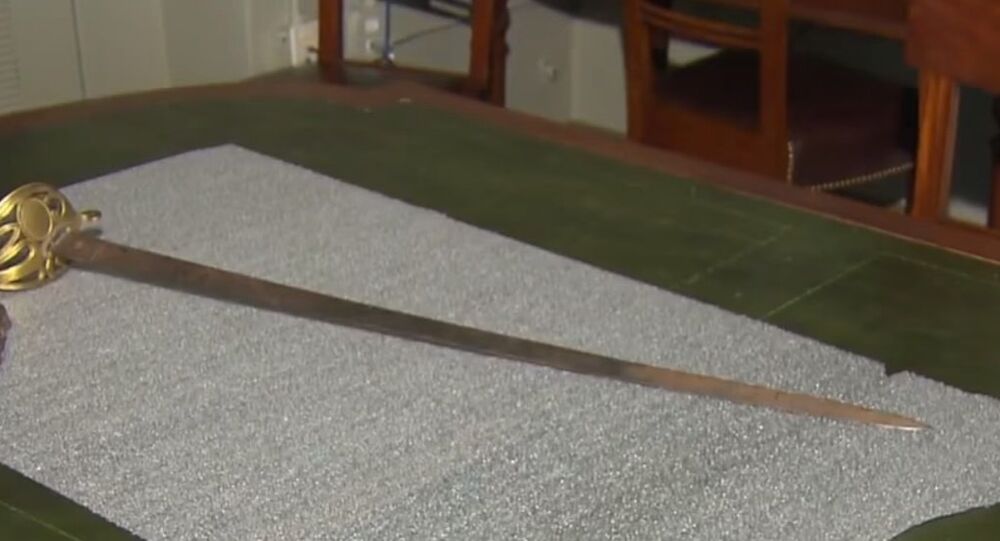 After vanishing 150 years ago, a sword that once belonged to the man who led a regiment of African-American soldiers during the US Civil War has been discovered.

Col. Robert Gould Shaw, commander of the 54th Massachusetts Voluntary Infantry, carried the British-made sword into battle for the last time in 1863, when he was killed during an ill-fated attack on Fort Wagner, South Carolina.

The story of the 54th Infantry was portrayed in the movie “Glory,” in which the role of  Shaw was played by Matthew Broderick. The film also featured Morgan Freeman and a Golden-Globe winning performance by Denzel Washington.

The weapon was recently discovered at the home of one Shaw’s distant relatives and on Tuesday, the anniversary of his death, it is scheduled to go on display at the Massachusetts Historical Society, the Associated Press reported.

Anne Bentley, the society’s curator of arts and artifacts, said "I got goosebumps when I saw it."

Dennis Fiori, president of the society, said in a statement, “To have located ‘the holy grail of Civil War swords’ is a remarkable discovery.

"Experts and visitors alike can finally see a piece of history that has been searched for since July 1863."

Like all officers in black units, Shaw was stripped of his clothes and belongings after he was killed, and the sword’s location wasn’t known for the last century and a half.

When the war ended two years after Shaw’s death, the sword was returned to his parents by a Confederate officer, eventually falling into the possession of his sister,  Susanna Minturn, as Shaw had no children.

The sword’s trail went cold after that, but it is believed that Minturn gave it to one of her grandsons when he was a teenager. Late last year the sword was found in the basement of one of Minturn’s great-grandchildren, who found it following his mother’s death as he was cleaning out her house.

The sword was inscribed with the initials RGS, which indicated to the society that they had the genuine article. They verified its authenticity by tracing the serial number to Henry Wilkinson, an English sword maker.

Even though Shaw only got the sword a month before he died and only used it twice, the sword shows some wear and has some rust on the blade, likely because a Confederate soldier used the weapon in battle after stealing it.

"You can imagine what a prize that would be for a Confederate soldier," Bentley said. "It was a far superior sword than you could get in the Confederacy at that time."

The Shaw collection will be on display until September.

Assad Must Stay: 'A War Involving Fighters From 86 Countries Isn't a Civil War'