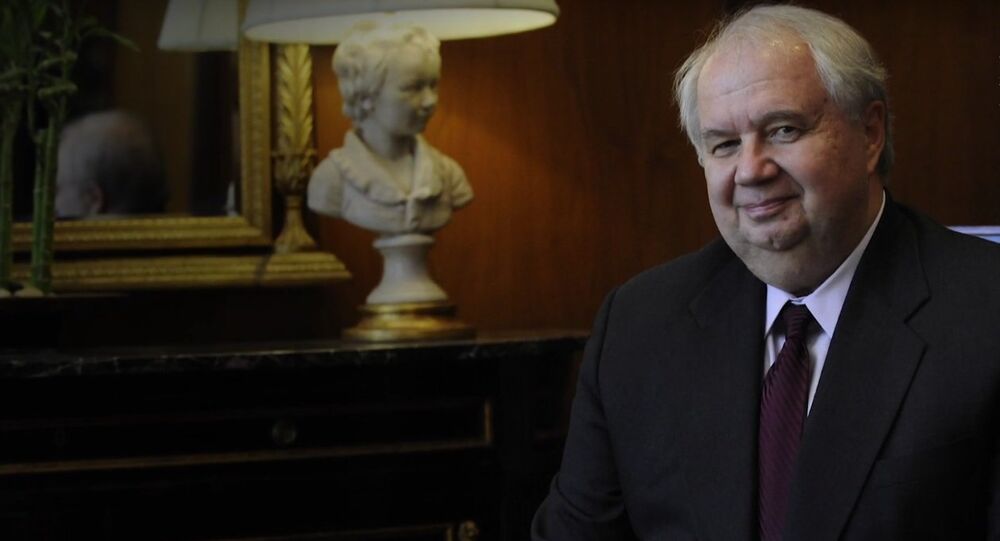 A Thanksgiving service and a reception in honor of the departing Russian Ambassador to the United States Sergey Kislyak will be held at the Russian Orthodox Cathedral St. John the Baptist in Washington DC on Thursday, according to Archpriest Victor Potapov.

© AFP 2020 / AHMAD AL-RUBAYE
Russian Church Urges US to Join Forces With Russia in Fighting Terrorism
WASHINGTON (Sputnik) — A Thanksgiving service and a reception in honor of the departing Russian Ambassador to the United States Sergey Kislyak will be held at the Russian Orthodox Cathedral St. John the Baptist in Washington DC on Thursday, Archpriest Victor Potapov told Sputnik.

"We will have a farewell party for Sergey Ivanovich. It will begin with a Thanksgiving prayer for the fruitful cooperation established during his tenure as ambassador in Washington, DC," Potapov said on Wednesday.

Potapov added the gathering on Thursday will also be a "parting prayer service — we will pray that God will bless him in his plans for the future."

After the service, a dinner will be served in the parish hall, where a slideshow of various parish events in which Kislyak took part will be shown.

The Archpriest pointed out Kislyak had always supported the church’s charitable undertakings and attended its events, including those dedicated to Victory Day.

"The ambassador supported the idea of holding charitable celebrations of Maslenitsa, as well as the Tatiana Ball, organized by the parish youth," Potapov said. "He considers it important to support such undertakings."

The Archpriest also noted that he had the greatest impression with Kislyak during his communications with the ambassador.

"He is a modest man, a music lover, including church music, and he's just an easy-going person," Potapov said. "Of course, I am sad that Sergei Ivanovich is leaving, he is a good friend of our family and our parish. I hope we will have the same warm relations with a new ambassador."

Scientific Coordinator at the Institute for US and Canadian Studies of the Russian Academy of Sciences Sergey Rogov told the Izvestiya newspaper that Kislyak will return to Moscow on July 22.

According to Rogov, Kislyak may revise his plans if the United States delays issuing the agreement for the next Russian Ambassador Anatoly Antonov.

Rogov added that the US Senate had not considered Jon Huntsman’s candidacy for replacing John Tefft as US ambassador to Russia.

Kislyak has been Russia’s ambassador to the United States since July 2008.

In May, a source told Sputnik that Russian State Duma’s International Affairs Committee supported Deputy Foreign Minister Antonov as a candidate for the post of Russia’s ambassador in Washington replacing Kislyak.