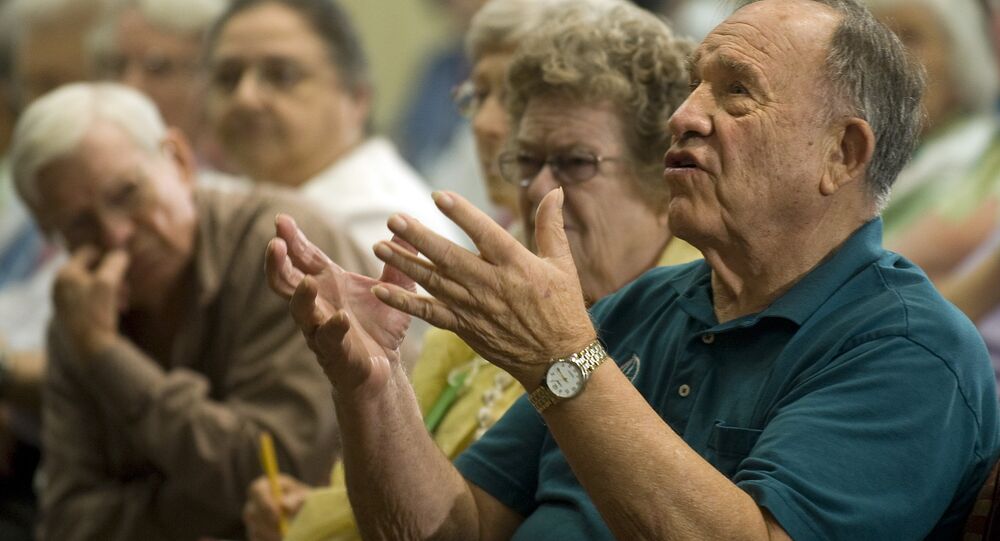 Americans aged 65 and older are opting to continue working rather than retire in order to maintain their comfortable quality of life, which might be an indication of a starting crisis in the US pension system, and is posing significant challenges to the US labour market and broader economy.

Kristian Rouz – While the US labour participation rate, albeit slowly improving, is still at its lowest since the early 1960s, the amount of retirement-age Americans still working has reached its highest since 1962.

© Photo : borisbork instagram
Million Dollar Grandpa: From Usual Pensioner to Insta-Millionaire in Two Months
US pension funds are facing declines in profitability and return on investment after eight years of near-zero central bank interest rates, and the generally ageing population adds to this downward pressure.

America might be slowly entering a pension crisis, bearing hazards of pension fund insolvency, higher pressure on the federal and state budgets, and possibly a broader decline in effective disposable incomes of all American workers regardless of age.

Roughly 19 percent of retirement-age Americans (65 and older) are still actively participating in the labour market, by working full- or part-time, according to a report from the Bureau of Labor Statistics (BLS) released last week. As of 2Q17, about 32 percent of Americans aged 65-69 were working, and the employment/population trend for both statistical groups (65 and older and only 65-69) has been advancing in the past two decades, hitting its 55-year highest this year.

This means that the US pension system, heavily based on not only direct budget spending, but also on individual savings and retirement plans, such a 401(k), is perceived as increasingly inconsistent by many American workers, who prefer keeping their jobs last retirement   in order to maintain their quality of life at a comfortable level.

What this also means is that US wage stagnation, prominent in the past two decades, draw significant contribution from the retirement-age labour market participants, as labour shortages the employers are facing are less severe than they could be with more people retiring and leaving workforce for good.

US retirement plans and Social Security benefits significantly improved only in the late 1960s, when the improvements in the economy, new technology, and military-industrial complex allowed the federal government to expand its pension programmes, whilst sustainable gains in average earnings in the 1980s-1990s allowed for greater savings. At the same time, with central bank interest rates noticeably high throughout the 2nd half of the 20th century (as high as 19 percent in the early 1980s), US pension funds could allocate capital more efficiently, allowing for generous payments to US pensioners.

© Sputnik / Igor Mikhalev
US Senate Repeals Obama Rule for State-Sponsored Retirement Plans
Now, the situation with retirement-age labour participation has returned to its 1962 almost sorry state. Current US workers, due to the massively ageing population, cannot count on significant pension benefits when they hit retirement age, bringing savings plans to prominence at this point.

In 1994, according to the BLS report, just 21 percent Americans aged 65-69, and just 10 percent Americans 65 and older, were working. The 10-percent increase in retirement-age labour participation over the past 23 years suggest the trend is set to continue and, possibly, accelerate, unless the US economy undergoes significant reform.

By 2024, the BLS expects some 36 percent of Americans aged 65-69 to be working, meaning a 5-percent increase over the next five years. This is going to compress gains in worker compensation, contribute to youth unemployment, and suppress the already low US labour productivity.

The situation with US pension funds, on the other hand, is becoming increasingly volatile. A pension fund in the US bears a lot of similarities to an average investment fund, only acting less risky oftentimes. Near-zero interest rate environment in the US in the past 8 years has slashed investment fund profitability, and a slow pace of broader economic growth has limited return-on-investment (ROI) growth. With more retirees and less money to be distributed between them, many retirement-age Americans are naturally opting to keep working.

© Photo : Pixabay
One in Five Working Brits Think They Couldn't Afford Retirement, Survey Reveals
On Monday, several US pension funds demanded that the federal government makes big US enterprises provide them with information about their employee demographics, skills, workplace safety, labour productivity, human rights, salaries and wages, and bonuses. Pension funds see this information as “material to investors”, but in reality, they might be feeling they are not getting enough pension money out of the US corporate sector.

The petition was filed to US Securities and Exchange Commission (SEC) by 25 pension funds, including California Public Employee’s Retirement System (CalPERS), and California State Teachers' Retirement System (CalSTRS). Their incentive is likely to fail, as, under the Trump administration, the federal government would be more reluctant to jeopardise the slowly recovering corporate profits to appease the pension funds facing the lack of disposable capitals.

However, it is quite noteworthy – US pension funds are struggling to make money through investment, and are not receiving enough money through traditional mechanisms of social security redistribution, as more and more working Americans of all age groups, are starting retirement plans with their bank, or opt for employer-sponsored 401(k).

May Thanks Prince Philip for Contribution to UK Following Retirement