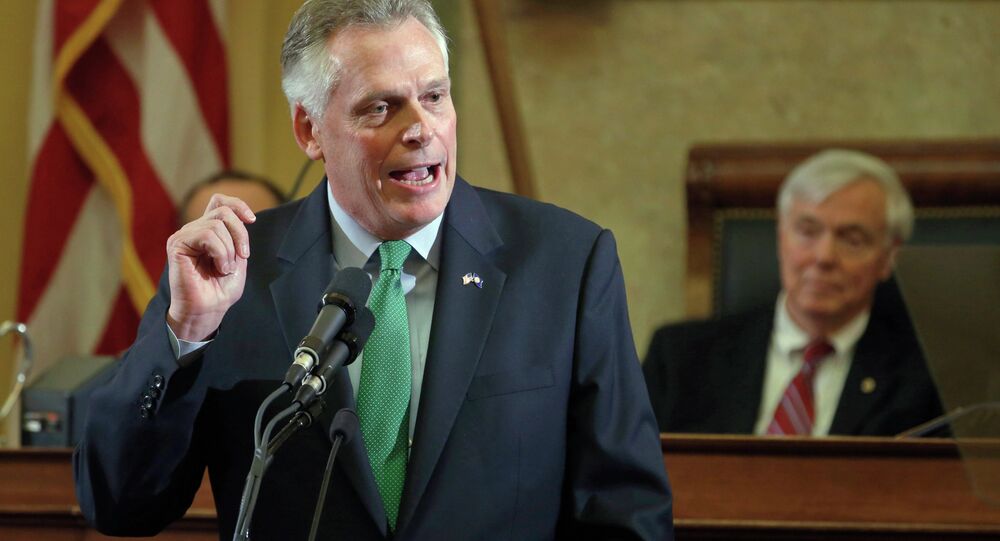 US state of Virginia Governor Terry McAuliffe said in a statement he will not grant clemency to William Morva, allowing the planned execution of the reportedly mentally ill man to proceed on Thursday.

© AP Photo / Rainier Ehrhardt
US Rights Group Calls for Removal of Monuments of 'White Supremacy' in Virginia
WASHINGTON (Sputnik) —"In short, the record before me does not contain sufficient evidence to warrant the extraordinary step of overturning the decision of a lawfully empaneled jury following a properly conducted trial," McAuliffe stated.

McAuliffe said his team evaluated the trial testimony and concluded that Morva was given a fair trial with information about his mental health available to the jury.

Morva's lawyers have claimed that he was severely mentally ill and suffering from a delusional disorder when he murdered Derrick McFarland, a security guard, and Montgomery County sheriff's deputy Eric Sutphin in 2006.

He is scheduled to be executed at 9 p.m. (1 a.m. GMT) on Thursday with a drug called midazolam, which was introduced to the US lethal injection multi-drug "cocktail" last year after the manufacturer of pentobarbital withdrew that drug from use in executions.

Midazolam's use in executions was called into question after the drug apparently wore off shortly after being administered in at least three cases, including one where the condemned man, Clayton Lockett, began speaking during his execution. The drug is supposed to render people unconscious.

The governor has previously stated he personally opposes executions.