In the latest in a series of lawyer-client privacy scandals at the US military prison complex at Guantanamo Bay, detainees were “unintentionally” heard consulting with their attorneys by unidentified, unauthorized people, according to a Navy prosecutor.

Cmdr. Douglas Short, lead prosecutor in the case of Abd al Hadi al Iraqi, who is accused of leading the Al-Qaeda extremist group after the attacks on September 11, 2001 explained, "Any characterization regarding an intrusion in the attorney-client relationship is misleading," according to Military.com. 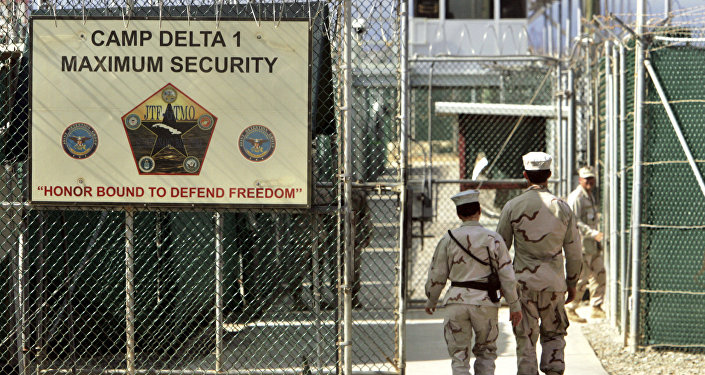 But Short’s statements help clarify a letter Marine Brig. Gen. John Baker wrote in June saying that since discovering that some legal meetings had been subject to “intrusive monitoring,” he had a "loss of confidence" in the privacy of "all potential attorney-client meeting locations."

Though he said that none of the overheard conversations were "currently in contested military commissions trial proceedings," he did not explain why consultations were held in places where they could be overheard.

Short also didn’t say who was listening in, but did state that "no privileged attorney-client communications" were "overheard by anyone in a law enforcement or prosecution role."

Compromised legal meetings have long been an issue for Gitmo defense lawyers, who have dealt with listening devices disguised as smoke detectors in meeting rooms, the CIA muting court radios and the FBI attempting to make informants out of defense team members.

"This situation, like the ones before this, do harm to the attorney-client relationships at Guantanamo," Baker wrote. "Even if unintentional, accidents and coincidences that occur in Guantanamo Bay, can have devastating consequence, and at some point, could lead a reasonable client to believe he has no ability to have private conversations with his lawyer."

The Southern Command released a statement denying that there was an  "attorney-client relationship challenge," saying "The confidential nature of attorney-client communications is strictly observed by the military guard force in this location, even as comprehensive measures are in place to ensure the security of the facility and the safety of all who enter it."

The document added, "Any suggestion that this situation has caused harm or that it demonstrates a lack of commitment to the attorney-client privilege is mistaken."

US Review Board Recommends Transfer of Russian Citizen From Guantanamo