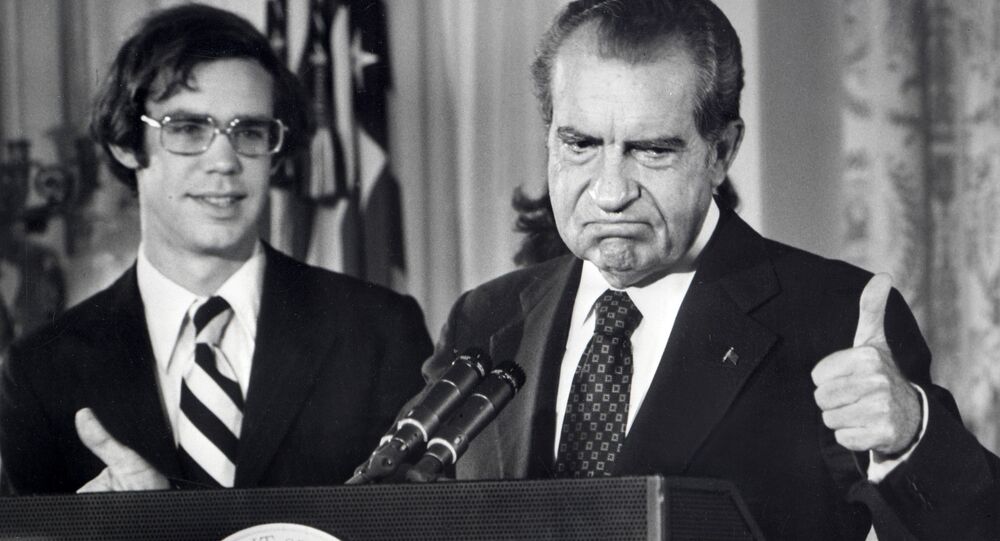 June 23 marks 45 years since US President Richard Nixon and Chief of Staff H. R. Haldeman were taped discussing whether the CIA could help derail the FBI's investigation into the Watergate affair. Nixon's obsession with leaks ended in his downfall – now President Donald Trump is waging a potentially dangerous war on disclosures of his own.

In a sense, on that fateful morning President Nixon had nothing to worry about. While the June 17, 1973 burglaries of the Watergate hotel complex had been perpetrated by individuals loosely affiliated with his administration, the now-infamous "plumbers" — so-called as their mission was to stamp out leaks of sensitive information from the White House — he had neither authorised nor possessed foreknowledge of the raids.

​However, in a move that has mystified historians ever since, rather than allowing justice to take its course, the soon to be embattled President instead opted to attempt to cover up the burglary, and obstruct the FBI's investigation into the break ins.

Nixon told Haldeman, 45 years ago tomorrow, in "smoking gun tape," to try to use CIA to block FBI investigation of Watergate: pic.twitter.com/yGaF3gbpOn

"This business will uncover a hell of a lot of things, if you open that scab… we just feel it would be very detrimental to have this thing go any further. This involves these Cubans, [Howard] Hunt, and a lot of hanky-panky we have nothing to do with ourselves," Nixon said.

The 45th anniversary of the "smoking gun" conversation between Nixon and Haldeman being committed to tape is bizarrely fitting, given Special Counsel Robert S. Mueller III is alleged to be investigating President Trump for possible obstruction of justice, for firing FBI Director James Comey.

Spokespeople for the potentially soon to be embattled President have condemned the prospective probe as "outrageous, inexcusable and illegal."

The real story turns out to be SURVEILLANCE and LEAKING! Find the leakers.

​Moreover, like Nixon, Trump has long attacked leaks and leakers.

Before taking office in January, he suggested US intelligence agencies were responsible for "a lot of leaks and a lot of fake news coming out."

Within days of inauguration, Trump's concerns into leaks had graduated into overt calls for an investigation. The cause of his irritation was a mainstream media story citing anonymous government officials, which led to the resignation of Michael Flynn.

"These are criminal leaks. This whole Russia scam you guys are building…you don't talk about the real subject which is illegal leaks," he said at a press conference.

​The next month, the White House was again scandalized when Press Secretary Sean Spicer convened a meeting on leaks with major media organizations — details of which were promptly leaked.

In May, Trump announced the creation of a special taskforce to combat leaks and the spread of false information on topics such as his administration's secret ties with Russia — and fired FBI Director Comey.

Comey claimed to a Senate hearing in June he "hoped" there were tapes of Trump asking him to dump a probe into Flynn.

I believe the James Comey leaks will be far more prevalent than anyone ever thought possible. Totally illegal? Very 'cowardly!'

​However, as Nixon's example demonstrates, Trump would be wise to rein in his rage over leaks — and be as open as possible with investigators. After all, it was the former president's response to leaks of potentially embarrassing confidential information, not his involvement in criminal or questionable activity, which proved to be his undoing.

The origins of the Watergate affair lie in the June 13, 1971 release by the mainstream media of excerpts from the Pentagon Papers, documenting the true history of the fateful Vietnam War, provided to reporters by former Pentagon analyst Daniel Ellsberg.

Initially, Nixon wasn't fazed by the revelations, much of which centered on the conduct of the Eisenhower and Kennedy administrations. However, Henry Kissinger, Nixon's national security adviser, told the president  the leaks made him look like a "weakling."

Ellsberg was originally arrested for (and subsequently acquitted of) violating the Espionage Act, but this wasn't sufficient for the White House.

"We've got to get this son of a b****. We can't be in a position of allowing some guy to get away with this kind of wholesale thievery, or otherwise it's going to happen all over the government," Nixon told Attorney General John Mitchell.

​Nixon's aides responded by creating the "plumbers" — the rest is history, and a troubling lesson in the power of unintended consequences.

Trump has consistently made clear he has nothing to hide, and has done nothing wrong — however, his apparent reluctance to comply with investigations into his alleged ties with Russia, no matter how farcical and politically-motivated they may be, fuels speculation among the media, public and political class.

The release of all relevant information to investigators in a timely fashion would restore confidence, and silence questioning voices once and for all. Had Nixon chosen to do so June 23 1973, rather than attempt to cover up crimes he played no direct role in, history may well have been different — although, given the evident power of leaks to topple Presidents, Trump's dislike of unauthorized disclosures may well be understandable.

The Forgotten Story Behind Watergate