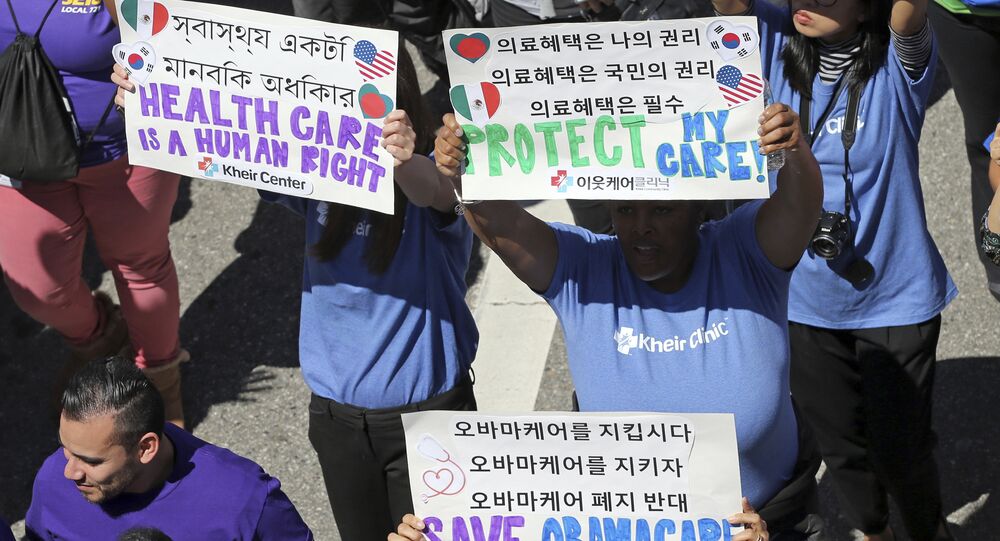 Nearly Half of US Voters Oppose Republican Healthcare Plan

Nearly half of US voters, 49 percent, disapprove of the American Health Care Act, the Republicans’ bill to replace the Affordable Care Act, also called Obamacare, according to opinion poll.

© AFP 2021 / RHONA WISE
US Senate Republicans Reported to Be Planning Vote on Obamacare Repeal Next Week
WASHINGTON (Sputnik) — Nearly half of US voters are opposed to the American Health Care Act, the Republicans’ bill to replace the Affordable Care Act, also called Obamacare, a new poll revealed on Wednesday.

Immediately after the bill passed on May 4, forty-four percent opposed it while 35 percent approved it, according to the pollster.

© AP Photo / J. Scott Applewhite
US House of Representatives Passes Repeal And Replace of Obamacare
Additionally, only 27 percent of poll respondents said the bill will improve the US healthcare system, and 41 percent said it will be worse. Forty-six percent said it will increase costs for them and their families.

Senate Republicans will unveil their plan on Thursday, but Senate Minority Leader Chuck Schumer said on Tuesday that Democrats are skeptical about who will be able to review the bill before a vote.

The poll surveyed 2,051 registered US voters between June 15-19. It has a margin of error of plus or minus 2 percentage points.

US Lawmakers Pass Repeal And Replace of Obamacare