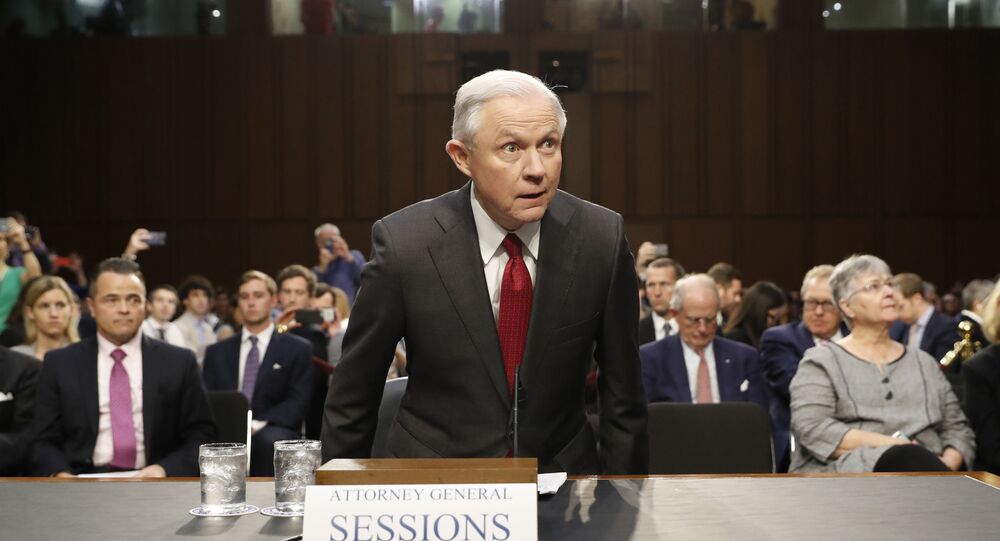 Lawmakers questioned Sessions on aspects of fired former FBI Director James Comey's testimony from last week, as well as Sessions' own alleged meetings with Russian officials. Sessions recused himself in March from the ongoing investigation into purported collusion between US President Donald Trump's campaign and the Russian government.

Senate Committee Chairman Richard Burr outlined the basic goal of the hearing: to discern "fact from fiction" and gain clarity from Sessions on his meetings with Russian officials, his involvement with US President Donald Trump's foreign policy team before the election and whether Russian officials exerted influence on said policy, Sessions' decision to recuse himself from any Justice Department investigation into 'Russian meddling' and what role the Attorney General may have played in the removal of former FBI director James Comey.

The attorney general reiterated that he is not hiding private meetings with Russian officials. "I did not have any private meetings" with Russian officials at the Mayflower hotel, he said. Whether he may have had encounters in public settings, "whether I ever attended a reception where the Russian ambassador was already present is beside the point of Russian interference in the election," he continued.

Aside from meeting Russian Ambassador Sergey Kislyak at the Republican National Convention and during his Senate office with top aides, Sessions said he had not other meetings that he knows of, after "racking his brain." A frequent refrain in speaking before Congress is to demur that one 'cannot recall' certain events that could be incriminating or at least suspicious in nature

The very notion that Sessions colluded with Russians after having served in public service for 35 years is "appalling" and a "lie," he said in during opening remarks.

Regarding his March 2 recusal, Sessions said it was not because of "any wrongdoing" but because of a Justice Department regulation that "department employees should not participate in investigations into campaigns where one participated in that campaign."

​Sessions also said has not been briefed on the investigation into Russia, "which is ongoing today," except as it was relevant for him to make the decision to recuse himself.

Regarding the decision to recommend FBI Director James Comey's dismissal, the attorney general said the recommendation was based on Deputy Attorney General Rod Rosenstein's advice to let Comey go, not because of an FBI probe into Russia, according to Sessions' account.

​Sessions said he has "confidence" in Robert Mueller as Special Counsel to investigate illegal errors by the Trump campaign. Sessions added it "wouldn't be appropriate" for he himself to remove Mueller from his position, though in his current role as attorney general technically has the authority to do so.

The former senator affirmed "absolutely" that he never participated in collusion, tampering, or any other active measures to subvert the integrity of the US election.​

Sessions said its "possible" he met with Kislyak on other occasions but said "I don't recall it."

Sessions also refused to discuss talks he  may have had with US President Donald Trump about Comey's dismissal. It would be "improper" to reveal the contents of conversations with Trump, he said. Trump was widely seen as having created a fake paper trail for Comey's ouster by asking the Justice Department to provide a recommendation to do so. Days later, Trump changed the entire story and said he relieved Comey of his duties over "this Russia thing" and that he would have gotten rid of Comey "regardless of recommendation."

Sessions "did not participate" in the decision to change the Republican platform committee's stance on sending weapons to Ukraine.

The US population is tired of "stonewalling" answers that answers can't be provided because they it would be "inappropriate," Oregon Senator Ron Wyden emphasized regarding Sessions' testimony. "Respectfully, you're not answering the question," Wyden pushed in response to push back from Sessions.

"Point blank, why did you sign the letter recommending the firing of Comey when it violated your recusal?" Wyden asked. Sessions shot back that it didn't interfere with his recusal, to which Wyden slammed Sessions' response, saying, "it doesn't pass the smell test."

​Sessions claims that the judicial disqualification only applied to one case, and that as US Attorney General, he can still provide input on leadership of various federal agencies. "Supervising the federal agencies is my responsibility," he said, adding "I believe I had a duty" to author a recommendation.

The sitting US Attorney General knows nothing about 'Russian meddling' beyond "what I've read in the newspaper," Sessions told the Senate.

US Attorney General Sessions Offered Resignation in May, Trump Declined

Ambassador Kislyak Doing His Job, Had No 'Sessions' With US Officials - Putin