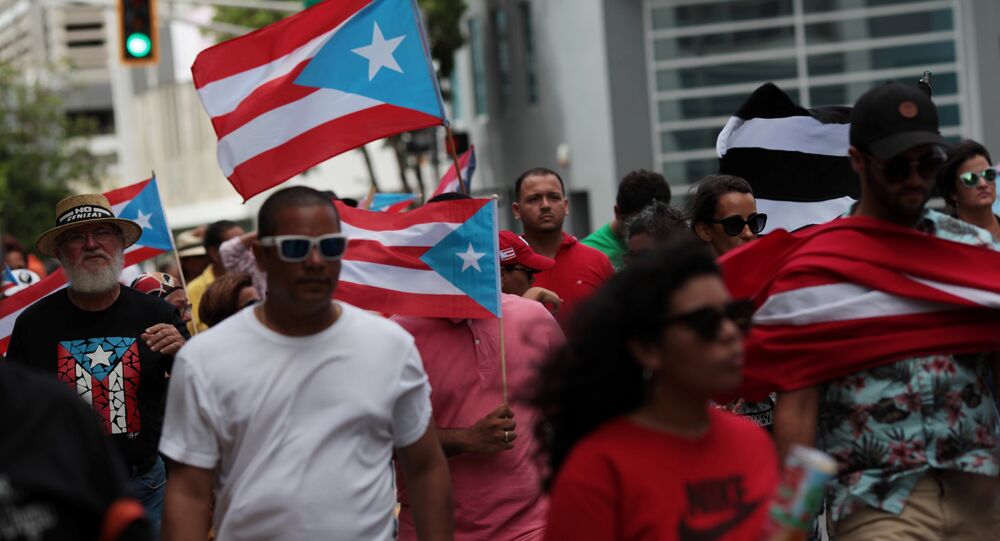 You're Not Welcome: US Congress Ignores Puerto Rican Vote In Favor of Statehood

Sunday's referendum on Puerto Rico's bid to become a full-fledged US state will do nothing to improve the region's dire economic state, Dr. Gibran Cruz-Martinez told Radio Sputnik.

On Sunday, Puerto Ricans took part in a referendum on whether the country should become the 51st state of the United States of America.

The archipelago is currently an "unincorporated territory" of the US, which means it doesn't have a vote in the US Congress but the Congress has full jurisdiction over the territory. Puerto Ricans are US citizens with the right to move to one of the 50 states.

Puerto Rican governor Ricky Rossello was elected last year on a campaign platform which pledged to get statehood for Puerto Rico.

He maintains that the statehood is key to overcoming Puerto Rico's economic problems. These reached a crisis point last month: it filed for bankruptcy in May, owing more than $70 billion in public debt and with 12.7 percent unemployment.

However, Sunday's non-binding referendum, the fifth that the island has held on the issue, was marred by low voter participation.

Dr. Gibran Cruz-Martinez, a Postdoctoral Research Fellow at the University of Agder, Norway, told Radio Sputnik that calls from all major opposition parties to boycott the vote had resulted in a low participation rate of just 23 percent, one-third of the number of people who voted in the 2012 referendum.

"The results were quite predictable, as this referendum was actually boycotted by all major parties and organizations, with the exception of the ruling pro-statehood party. So I think this event really had little significance for the region."

"Statehood obtained more or less half a million votes, but in the latest referendum this option actually got 800,000. So that means that the statehood support decreased by more or less 300,000 people in just five years."

Attachments to cultural and national identity are the main reasons why Puerto Ricans may oppose US statehood, Cruz-Martinez said.

Any decision on bestowing statehood on Puerto Rico would be taken by US Congress, which has not endorsed the non-binding referendum and is unlikely to recognize the result.

"I think it is really rather unlikely that Puerto Rico will become the 51st state in a xenophobic administration like the one that we have in the US at the moment. A country with more than $120 billion in debt and pension obligations that would send mainly Democratic [Party] representatives to Capitol Hill, I really think it's rather unlikely."

© Sputnik /
Fitch Rating for Puerto Rico Remains Unchanged Despite Declaring Bankruptcy
"Puerto Rico is actually dealing with a huge economic and debt crisis" and its economy has shrunk ten percent in the last ten years; 45 percent of people there live below the poverty line. This figure is even higher among children; up to up to 60 percent of children under five are living in poverty, Cruz-Martinez said.

"According to pro-statehood supporters, Puerto Rico becoming a state will increase investment and stabilize the economy, but as far as I know there is no research to support this and actually this will increase the tax burden for Puerto Ricans and increase the amount of resources that the US will have to send to Puerto Rico," Cruz-Martinez said.

The referendum is unlikely to help improve the region's economic position, since it has no vote in Congress to pressure for economic aid.

"Puerto Ricans have no voting representative in Congress, so it is really rather unlikely that they can promote new development policies for Puerto Rico in the colonial status that they have. I think it will depend more on the fiscal control board, the unelected board that is ruling Puerto Rico's finance, to actually be able to promote the economic development rather than this referendum."