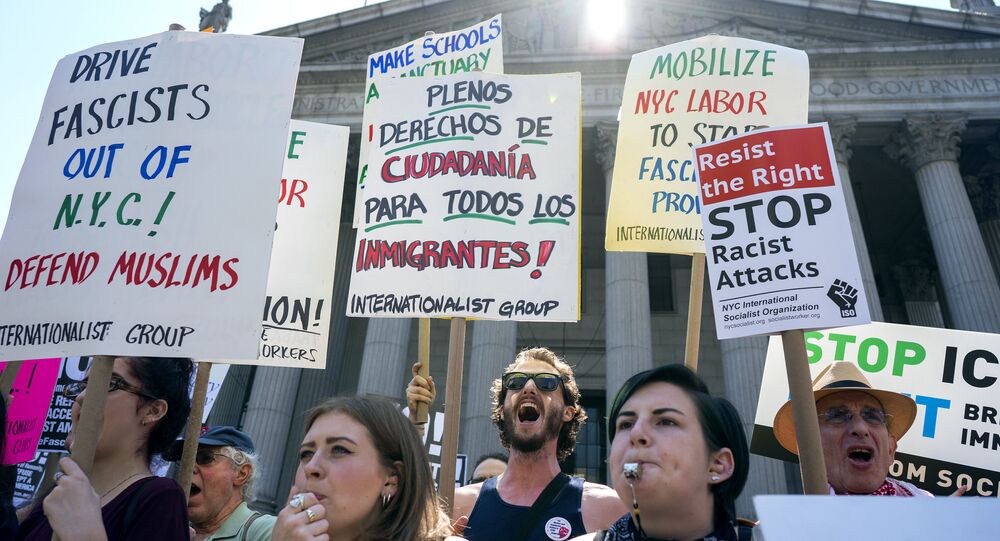 Anti-Islam Marches in US Fail to Draw Participants (PHOTOS)

A right-wing, anti-immigrant lobbyist group fearful of Muslim religious fundamentalist law staged marches in US cities on Saturday, and but they don’t seem to have drawn many attendees.

Apparently concerned that the US is being overrun by Islamic religious fundamentalists, a right-wing lobbying group with close ties to the administration of US President Donald Trump is attempting to drum up support for their cause by staging marches in about two dozen cities across the country.

The anti-Muslim lobby group Act for America, designated as a hate group by the Southern Poverty Law Center, has assisted right-wing politicians in passing anti-Muslim and anti-immigration laws at the state level and now seeks to expand its message through a series of marches that are lightning rods for strident rhetoric and potential violence, as counter marches were also planned.

Today's planned marches, said to be occurring in at least 20 US cities, have been branded by the special-interest group as a "March Against Sharia." The fact that the marches got off the ground at all indicates an increase in religious and cultural intolerance by some Americans, driven in part by the country's stark political divide following Trump's election, according to the Washington Post.

Though there were warnings that the ACT marches could lead to violence, a low turnout combined with little voter appetite for the group's message has resulted in a relatively peaceful day so far, with just one arrest documented in St. Paul, Minnesota.

The Hill reports that though this is one of the largest events coordinated by Act for America, which has more than 520,000 members, the organization had trouble attracting people willing to take to the streets. Facebook event pages for marches in some cities had fewer than 70 RSVPs. Attendance at the various right-wing marches around the country has been underwhelming, by most reports.

Heidi Beirich, director of the Intelligence Project at the Southern Poverty Law Center, stated that Act for America's fears of creeping sharia law are unfounded.

"It is absolutely impossible for any religious law to take over US law," Beirich said, cited by NBCnews.com. "The Constitution stops it, there is a separation of church and state."

Act for America founder Brigitte Gabriel has been quoted as stating that a "practicing Muslim, who believes in the teachings of the Koran, cannot be a loyal citizen of the United States."

A New York March Against Sharia supporter stated the march had "nothing to do with religion or nothing like that," though they also added "If [Muslims] don't like it they can go back to their countries and deal with it there," according to the New York Post.

"The constitution is the law of the land," said a protester in Harrisburg, Pennsylvania. "We have to be careful with who we let in the country," according to Reuters.

Across the street from the marchers, some 200 people held a large sign reading "Fascists out of NYC."