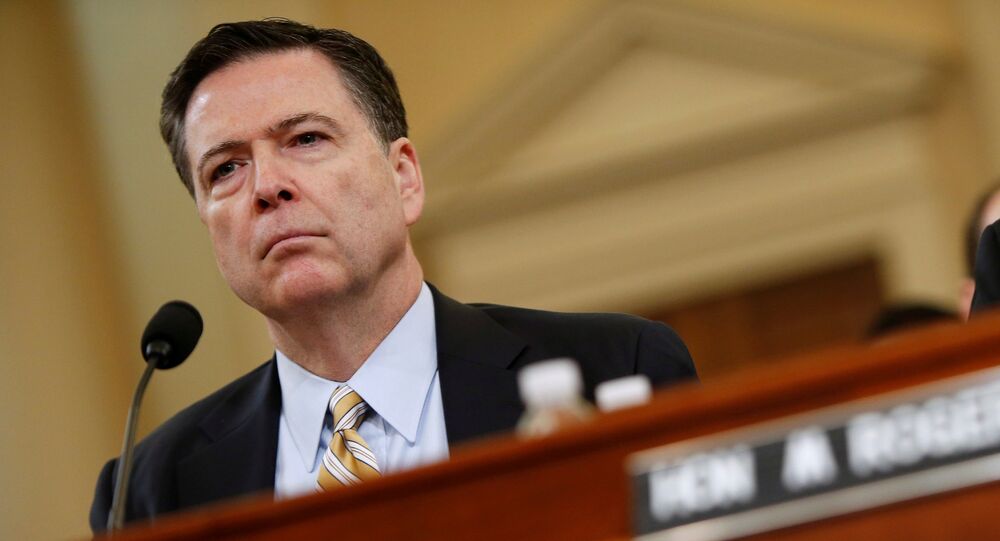 The One Thing Senate Wanted to Hear From Comey But Didn't

Testifying before the Senate Intelligence Committee on Thursday, former FBI Director James Comey said that President Donald Trump did not ask him to drop his probe into alleged Russian meddling in the 2016 US election.

Comey’s answer thus deprived some members of the committee of a chance to hear what they apparently wanted to hear.

“Did anyone ever ask you to stop the Russia investigation?” Intelligence Committee Chairman Richard Burr asked Comey.

"Not to my understanding, no,” Comey answered.

He also said that the Trump administration had tried to defame him.

© AP Photo / Evan Vucci
Showtime: US Senate Intel Panel Releases Comey Testimony on Trump-Russia Probe
“The administration then chose to defame me and, more importantly, the FBI, by saying the organization was in disarray… Those were lies, plain and simple," Comey stated.

“It confused me, when I saw on television that the president was saying that he actually fired me because of the Russia investigation,” he added.
James Comey recalled how, during a March 30 phone call, President Trump “said he had nothing to do with Russia, had not been involved with hookers in Russia, and had always assumed he was being recorded when in Russia."

According to Comey, Trump described the ongoing probe into Russia’s alleged role in the US election as a “cloud” that hangs over him undermining his ability to act in America’s best interest.

In an interview with Sputnik, Moscow-based US-affairs expert Mikhail Sinelnikov-Orishak said that the senators wanted to hear from Comey just one thing that could prod Congress to impeach Trump.

"What they wanted from [James] Comey was just one phrase. If he said: 'Yes, Trump asked me not to investigate,' it would be enough legal reason for them to launch the impeachment procedure,” Sinelnikov-Orishak said.

He added that President Richard Nixon was forced to resign not because he allegedly ordered his people to eavesdrop on the Democrats (which he didn’t), but because he obstructed the investigation that followed.

© AP Photo / Andrew Harnik
Trump After Ex-FBI Chief's Testimony: 'WOW, Comey is a Leaker'
“That’s why the so-called ‘Russian hackers’ are just a pretext. The bottom line is whether or not Trump was obstructing the probe. Comey said he didn’t and so the issue of impeachment is now off the table.”

Mikhail Sinelnikov-Orishak said however, that the investigation into Russia’s alleged interference in the 2016 US presidential election is not over yet.

“For Trump this probe will never end […] and will haunt him throughout his entire career,” the expert noted.

Donald Trump fired James Comey in May, purportedly for failure to properly exercise his duties as FBI director. Shortly after, Comey went to the media accusing the president of trying to scrap an ongoing probe of Trump’s ex-National Security Adviser Michael Flynn.

The opposition Democrats then demanded that Trump be brought to account for obstruction of justice.

James Comey conducted an investigation into Donald Trump’s alleged “ties to Russia” – a charge both the White House and the Kremlin have repeatedly denied.

Kremlin spokesman Dmitry Peskov has said Moscow did not have official contacts with Trump's team during the presidential campaign.

Comey Day at the Senate