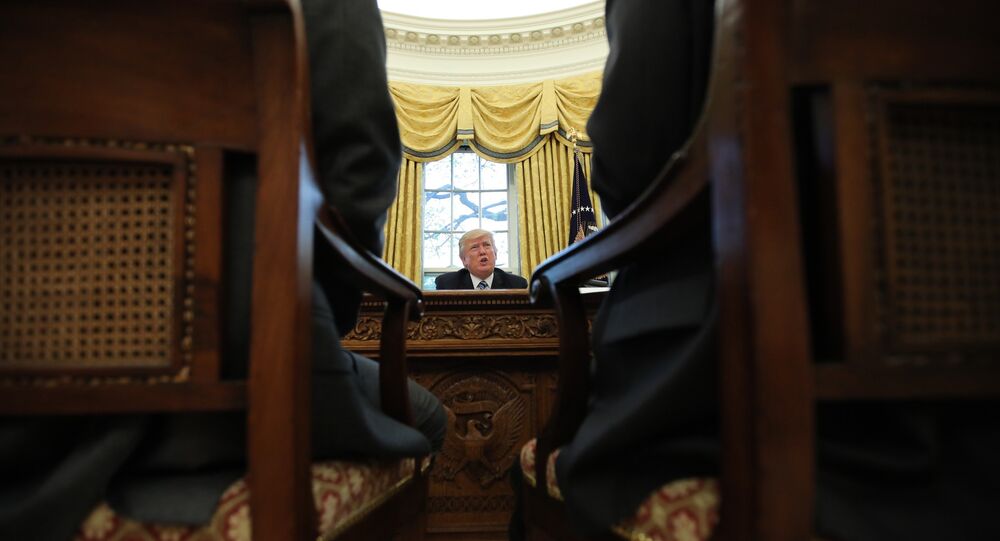 As the US mainstream media keeps reporting on an alleged scandal involving Trump’s campaign team attempting to set up a secure link with the Kremlin, Russian political analyst Vladimir Vasilyev explains to Radio Sputnik what the actual purpose being pursued is.

© REUTERS / Kevin Lamarque
Kushner Had No Plans to Set Up Secret Communication Channel With Russia - Reports
US mainstream media keeps reporting on the alleged suggestion of a private communications channel between the US and the Kremlin being set up.

Recent reports say that US President Donald Trump's son-in-law and senior adviser Jared Kushner did not suggest the establishment of a secret communication channel with Moscow during a meeting with Russian Ambassador to the United States Sergey Kislyak.

The meeting at Trump Tower was mainly devoted to Syria and the Russians, not Kushner, raised the issue of using a secure line between the White House and the Kremlin to discuss certain issues regarding the Syrian conflict, the source told Fox News broadcaster on Monday.

Earlier The Washington Post reported that Ambassador Sergey Kislyak told "his superiors in Moscow" that Kushner, son-in-law and confidant to then-President-elect Trump, made the proposal during a meeting on December 1 or 2 at Trump Tower.

© AFP 2020 / PHILIPPE DESMAZES
'Russia Wants to Change Negative Trend' in Relations With US, 'Major Shifts' Yet to Come
Citing the intercepts of Russian communications that were reviewed by US officials, the newspaper said that Jared Kushner and Russia’s ambassador to Washington discussed the possibility of setting up a secret and secure communications channel between Trump’s transition team and the Kremlin, using Russian diplomatic facilities "in an apparent move to shield their pre-inauguration discussions from monitoring."

Kushner's Lawyer Jamie Gorelick said that the White House senior adviser would be willing to talk to federal investigators as well as Congress about his contacts with Russian officials and his role in Trump's election campaign.

Russian political analyst Vladimir Vasilyev, chief research fellow at the Moscow-based Institute of US and Canada Studies, commented to Radio Sputnik on the reports.

"Why did they choose Kushner? Because he is directly connected with Trump. An imminent question will arise whether Kushner has been acting on his own initiative or Trump has been aware of his negotiations with Kislyak," he told Sputnik.

© REUTERS / Kevin Lamarque
NYT Strikes Again: How Kushner Could Have Tried to Create Link With Putin
It is highly unlikely that Trump's son-in-law has been acting on his own, without any awareness of Donald Trump, the political analyst said.

In this case, if it is proved that Kushner was negotiating with the Russian Ambassador with the consent of the US President-elect, it will open the way towards Trump's impeachment.

That is why, he said, the scandal will be inflamed by more revelations, according to the logic of an unwinding scandal.

Meanwhile, US President Donald Trump said on Sunday that he fully trusted his senior adviser and son-in-law Jared Kushner.

"Jared is doing a great job for the country… I have total confidence in him. He is respected by virtually everyone and is working on programs that will save our country billions of dollars. In addition to that, and perhaps more importantly, he is a very good person," Trump said as quoted by The News York Times.