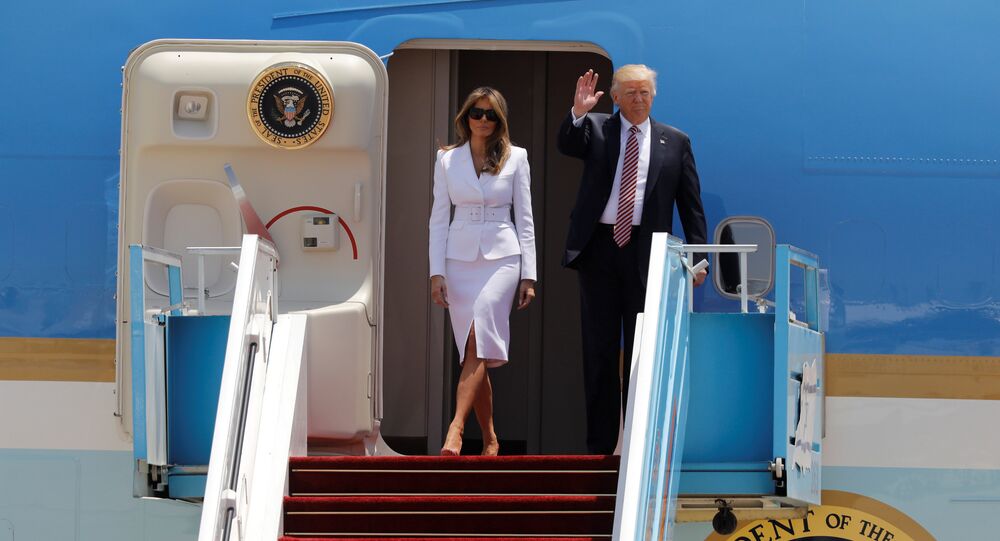 Recently the first lady of the United States, Melania Trump, put her husband, Donald Trump, in an awkward position when she refused to take his hand exiting the plane that landed them in Rome. There have been a number of such incidents in the couple’s public appearances. Sputnik takes a look at some of the most amusing ones.

During an official event at the White House, Trump forgot to raise his hand to his heart during a performance of the American anthem. Melania came to the rescue and poked him slightly to remind him to take the “patriotic position.”

During the inauguration ceremony for Donald Trump, he turned back to look at his wife and she smiled at him in response, but as soon as the newly inaugurated president turned to face the public, Melania’s smile instantly disappeared. The expression became a meme, which started an online movement: #FreeMelania. By tradition, on the day of the inauguration for the new president, the leaving president and the first lady welcome the new couple on the threshold of the White House. Usually, the US presidents act quite gallantly at such an occasion. For example, years ago Barack Obama before walking towards Bush, helped his wife, Michelle, get out of the car so that they could walk together. However, that was not the case with Trump. He got out of his car and immediately walked towards Obama and Michelle forgetting his wife, Melania, behind. In his defense, she was helped out by one of the guards! More recently, Trump and Melania were seen arriving at Tel Aviv airport. While walking on the red carpet toward the welcome ceremony, the US president tried to take his wife by the hand. However, Melania ignored his hand and then slightly slapped it. Trump immediately started correcting his tie, probably to masquerade the failed attempt. Then there was the flying kiss that took place during the inauguration ceremony. It seemed like Trump and Melania pecked each other on the cheek, however attentive viewers noticed that it wasn’t really a kiss. It was just a flying one! Hit and miss?
...
Reddit
Google+
Blogger
Pinterest
StumbleUpon
Telegram
WhatsApp
163