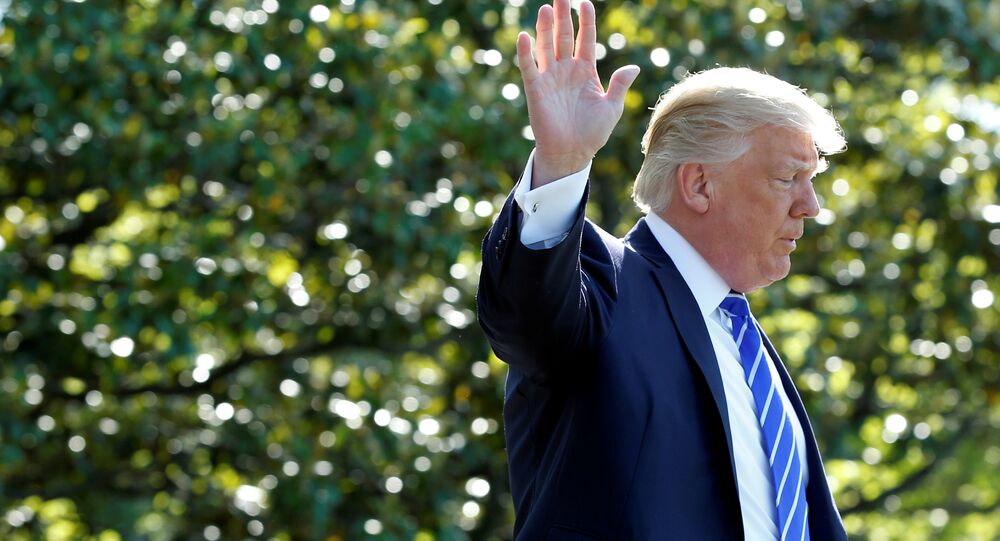 President Trump is in the middle of his first trip abroad. The grandeur he intended to convey during the trip has been overshadowed by the appointment of a special prosecutor to probe alleged Russian meddling in the US election. Expert.ru explains why, months after stepping into office, Trump still can't get a grip on the Washington establishment.

Trump's nine day multi-country tour, taking him to Saudi Arabia, Israel, Vatican City and Belgium, was envisioned as a grand and symbolic journey, with the president visiting the centers of the world's three Abrahamic religions.

But in the US, the visit ended up being overshadowed before it ever began, with the appointment of former FBI Director Robert Muller as special prosecutor to investigate alleged Russian interference in the 2016 presidential election.

Trump suggested that the initiative by the Justice Department was "the single greatest witch hunt of a politician in American history!"

© REUTERS / Jason Reed/File Photo
Globalists Refuse to Relax Grip on America as They Pile Pressure on Trump
Commenting on the president's predicament, Expert.ru, the online edition of Expert, a Russian business magazine, explained that only months into his first term, the president has already found himself "on the same slippery slope that led to the impeachment of President Richard Nixon forty years ago."

The key difference being that unlike Nixon, the only 'evidence' put forward against Trump is based on the allegations of a private cybersecurity firm working for Hillary Clinton, plus the empty claims of the US mainstream media and Trump's political opponents in both parties.

Exasperated by what seems fated to be a never-ending investigation fueled by speculation and hearsay, Trump said that the Muller inquiry "hurts our country terribly," not just domestically, but in the eyes of the rest of the world. "Because it shows we're a divided, mixed-up, not-unified country," the president added.

"Alas," Expert.ru wrote, "Trump has once again demonstrated that for now at least, he remains not a politician, but a businessman in politics, and that the new role he has found himself in comes to him with difficulty. As a building developer (something he engaged in for most of his conscious life), he was accustomed to making decisions which would be strictly adhered to by his subordinates."

© AP Photo / Susan Walsh
Trump Under Siege: US Media Prevents Russian Rapprochement With Constant Attacks
"Trump's companies did not even have a board of directors," Expert.ru recalled. "All the successes and mistakes in business were based on his own merit. Now, in the eight decade of his life, he has found himself in a situation that he is unaccustomed to: where not so much actually depends on him."

"The president of the United States is not the sole master of a business, from whom all that's necessary is achieving the desired [financial] result, and nothing more," Expert.ru noted. Rather, he is "a mediator, who must take into account the interests of the various actors of American politics. Furthermore, Trump is not used to a situation where his actions are viewed under a microscope…where he is criticized from all sides, including the press and from within his own party."

It is from here, Expert.ru noted, that the "nervous statements and bad political moves – like the decision to remove FBI director James Comey from his post right before meeting with Russian Foreign Minister Sergei Lavrov, come from. Trump has yet to learn to fully appreciate the importance of symbolic coincidences."

His opponents, and the media, have of course turned the Comey-Lavrov situation into a conspiracy in its own right.

Ultimately, the online resource noted that Trump enjoys the reputation of being someone willing to learn, "including from his own mistakes. At his age, of course, this isn't easy."

© AP Photo / Evan Vucci
Trump's Advisers Will 'Drive Him to the Red Line' in Syria
"Among those who do not believe in Trump's ability to become an effective politician is Hillary Clinton. The former secretary of state and ex-presidential candidate from the Democratic Party has clearly recovered from her defeat, and has engaged in frenzied activity."

Onward Together, the political action organization Clinton recently founded, is widely considered to be an organizing tool to help finance organizations opposed to Trump and those politicians for government posts at various levels who oppose the president.  The project's ultimate goal, Expert.ru notes, will be to win the next presidential elections, after Trump's impeachment, of course.

According to Expert.ru, Trump's recent appointment of his own 'election meddling' commission, headed by Vice President Pence, to investigate all allegations of interference in the 2016 election campaign, may prove to be his best chance to fight off the rising political tide against him. This commission will include checks of Trump's earlier claims that between three to five million illegal immigrants voted for his opponent.

Trump's commission is expected to submit its report in 2018. "By that time," Expert.ru notes, "the investigation against Trump should be completed as well. This means that a very interesting situation can develop over the next year: formal legal charges may be filed against both former candidates. Both Clinton and Trump will have to explain themselves before the entire country."

© AP Photo / Alex Brandon
Russia's Offer to Hand Trump-Lavrov Talk Transcript to US 'Unprecedented' Step
"But the price of losing the upcoming fight will be different for each of them. Clinton's reputation will certainly suffer. But she is unlikely to face even a fine. And the chances for her to exonerate are high." The US electoral system is complicated. For example, not all states require photo id. Under these conditions, illegal immigrants can vote, but proving intent on Clinton's part will be difficult.

"But if Trump loses, he will be the second president after Richard Nixon who prematurely lost his office under threat of impeachment. This will give Clinton another chance to fight for the presidency – her third and last, considering that she is set to turn 70 this year."