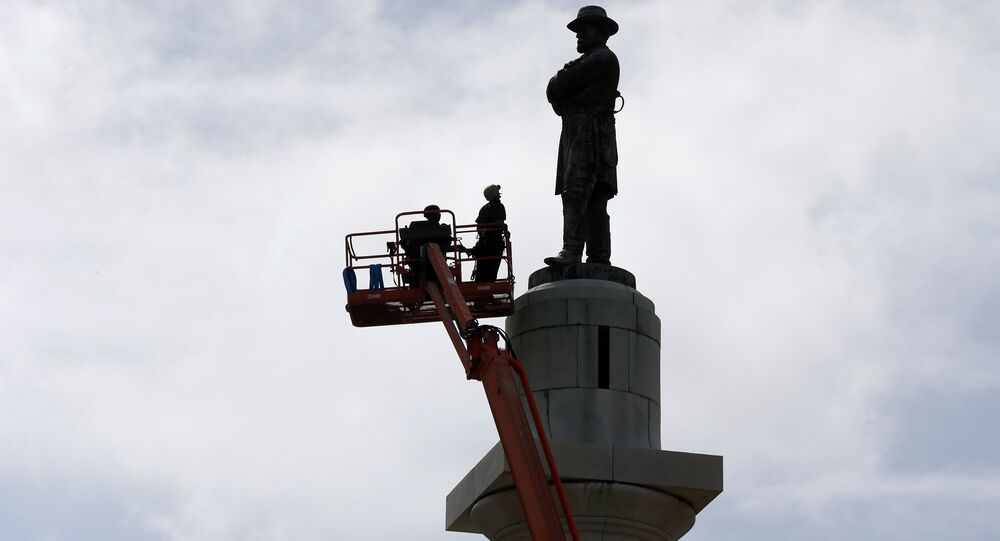 New Orleans has taken down another monument to its Confederate past: Friday evening, a statue of Confederate General Robert E. Lee was pulled from its pedestal, a process that was attended by spectators and livestreamed by news organizations.

© AP Photo / Stephan Savoia
USS Constitution, World’s Oldest Commissioned Floating Ship, Vandalized in Boston
The idea to remove the statue was first proposed by New Orleans Mayor Mitch Landrieu back in 2015. The general had towered over the city for more than 100 years, but after white supremacist Dylann Roof massacred nine black churchgoers in fellow former Confederate state South Carolina, the wisdom of honoring Lee so publicly was called into question.

The campaign to remove the statues has been highly controversial. According to the Washington Post, contractors have received death threats, and nearly every heavy-crane company in southern Louisiana was also threatened.

According to Landrieu, the monuments are the result of what he called "a cult of the lost cause."

"This cult had one goal and one goal only: through monuments and other means to rewrite history, to hide the truth, which is that the Confederacy was on the wrong side of humanity," he said.

The fate of the statues is undetermined. City authorities have reportedly received a number of proposals from various public and private organizations. Certain restrictions are to be placed on the monuments in their future homes: for example, the new owners will not be allowed to display them outdoors on public property in New Orleans.

The platforms where the monuments once stood will be decorated with public art and American flags, city authorities say.