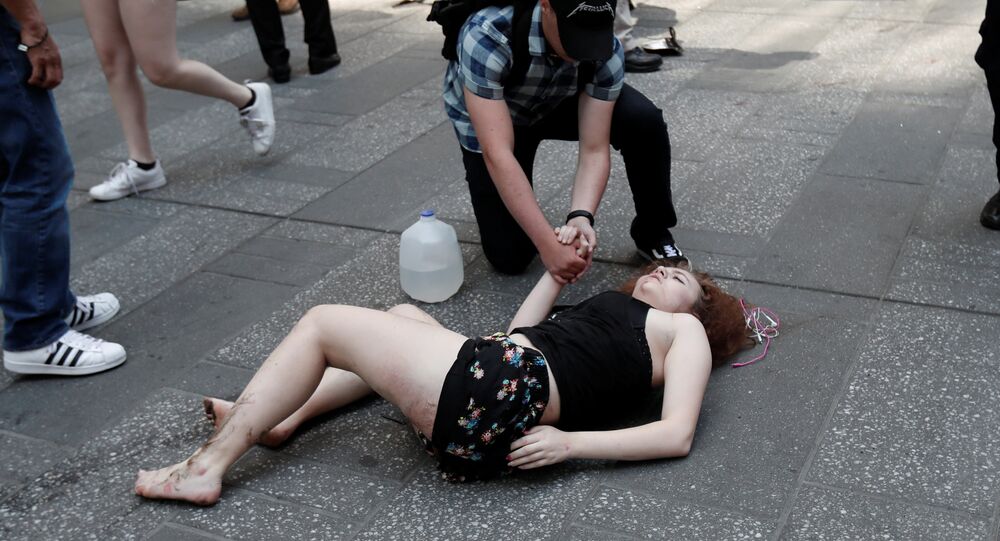 A speeding car rammed into pedestrians on a sidewalk in New York City's Times Square.

At least one person died in the incident, the NYPD said, adding that the incident is being probed. According to US officials, a 18-year-old woman is the casualty.

One male in custody in the #TimesSquare vehicle collision.
It is believed to be an isolated incident, it remains under investigation.

Reuters cited witnesses as saying that the car drove against traffic onto the sidewalk striking pedestrians.

What's happening in Times Square?? This car was in the sidewalk and people are on the streets pic.twitter.com/PsepRtfrAr

CBS reported that at least 20 have been injured, while the city's officials said over 10 have been wounded.

The vehicle that hit pedestrians in the Times Square was a red sedan, CBS New York reported.

© AP Photo / Mary Altaffer
A car rests on a security barrier in New York's Times Square after driving through a crowd of pedestrians, injuring at least a dozen people, Thursday, May 18, 2017.

It is unclear yet whether the car drove into pedestrians accidentally or not.

"Preliminarily it looks more like a vehicle accident than anything else," a NYPD spokesman told AFP.

The young driver of the car that struck multiple pedestrians in New York City's Times Square has been taken into custody, according to video reports from the accident scene on Thursday.

Multiple videos show a young male being taken into custody by the New York Police Department. CBS News has also confirmed that the suspect is in custody.

According to CBS New York, the suspect is allegedly a 26-year-old male, Bronx resident. The crash was likely caused by drunk-driving, NYPD told CBS News.

The authorities are testing the 26 year-old man for the presence of alcohol in his body, according to reports.

New York Police Department (NYPD) has closed off an area of New York City's Times Square after a car rammed into pedestrians on the sidewalk, injuring at least ten and killing at least one, police's spokesperson told Sputnik on Thursday.

"NYPD has closed off the area [of Times Square]," the spokesperson said.

Due to a vehicle collision with pedestrian injuries, emergency vehicles are in the area of #TimesSquare. Expect delays in the area.

Man run over by car at 42nd/7th. Others injured by vehicle on sidewalk. #attack #timessquare pic.twitter.com/onvLUEKSKY

.@POTUS has been made aware of the situation in Times Square and will continue to receive updates

The Battle of Bull Run: Bovine Takes Police on Wild Chase Through NYC