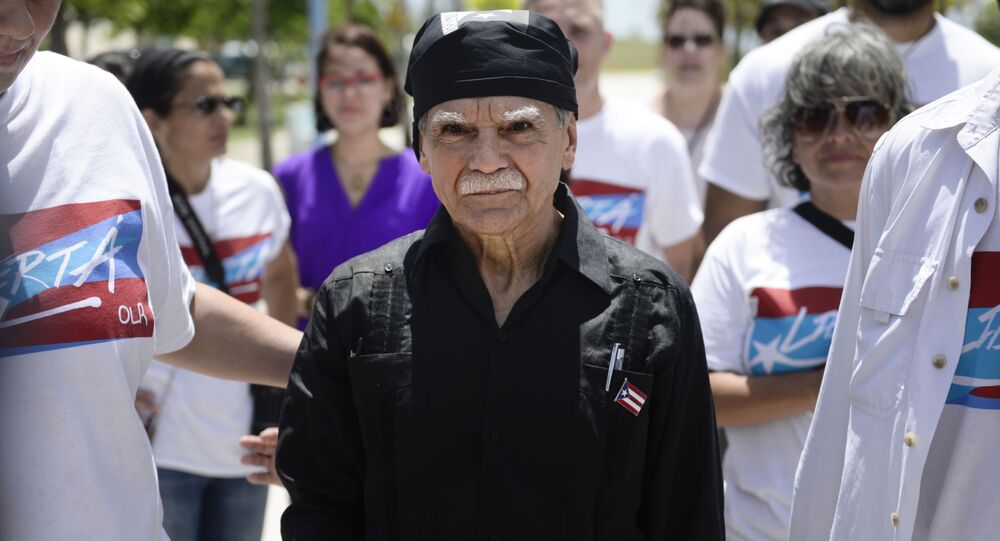 After 36 years in jail, Oscar Lopez Rivera emerged after he received a pardon as one of the last acts in office of President Barack Obama. Lopez Rivera emerges to find his native Puerto Rico embroiled in the worst financial crisis in the island's history.

In 2012 the people of Puerto Rico voted in favor of becoming the 51st state of the United States. But it was a non-binding referendum and President Donald Trump showed no interest in changing the island's strange political limbo.

Oscar López Rivera, a Puerto Rican nationalist and symbol of the fight for independence, is free after more than three decades in custody: pic.twitter.com/UVf41fmTrO

It has effectively been a colony of the US since 1898, when they seized it, along with Cuba and the Philippines, from Madrid during the Spanish-American War.

But while Cuba and the Philippines would both become independent states, Puerto Rico has always remained a "unincorporated" part of mainland US.

Millions of Puerto Ricans have, over the years, migrated to the mainland and there are thriving communities in New York, Miami, Chicago and several other cities.

Lopez Rivera was a member of the National Liberation Armed Forces (FALN), a group that believed in the 1970s they could bring about independence through violent struggle. They carried out a series of bombings.

He was arrested in 1981 and sentenced to 55 years in prison on charges of seditious conspiracy against the US government. A decade later, they added another 15 years for an attempted escape.

But Obama finally commuted his sentence in January, but ordered him to serve another four months before he could be released.

The news was overshadowed by Obama's decision to commute the sentence of Chelsea Manning, the transgender former soldier who was involved in leaking files to WikiLeaks.

Manning was freed Wednesday, May 17, after seven years in jail.

But that pales into insignificance compared to the 36 years Lopez Rivera spent behind bars.

On Wednesday he emerged from his daughter's home in San Juan, where he had been transferred after being released from a prison in Terre Haute, Indiana.

A crowd gathered in the streets of the Puerto Rican capital's Santurce district, holding flowers and Puerto Rican flags and chanting: "Free at last."

"All political, religious and civic forces of the country, although they do not share the political ideology of Rivera, that is to say the independence of Puerto Rico, respect the sacrifice that this man had for his cause. His figure became a symbol of resistance and unity," Carlos Ramos, professor of the Inter-American University of Puerto Rico, told Sputnik.

"Rivera was never accused and convicted of any crime of blood, but because of the so-called crime of seditious conspiracy, an excuse used by many states to suppress the right to freedom of expression," he added.

"His community in New York and Chicago has dedicated the Puerto Rican parade to him. Here in Puerto Rico the joy is immense, there is a lot of expectation, waiting to welcome this phenomenal man."

But Lopez Rivera coincides with a US federal judge starting bankruptcy proceedings against the island's government, which owes US$123 billion.

The Commonwealth of Puerto Rico is seeking to restructure US$73 billion in debt, from multiple agencies with another US$49 billion in underfunded pension liabilities.

US Political Prisoners That Don’t Even Exist, According to Obama