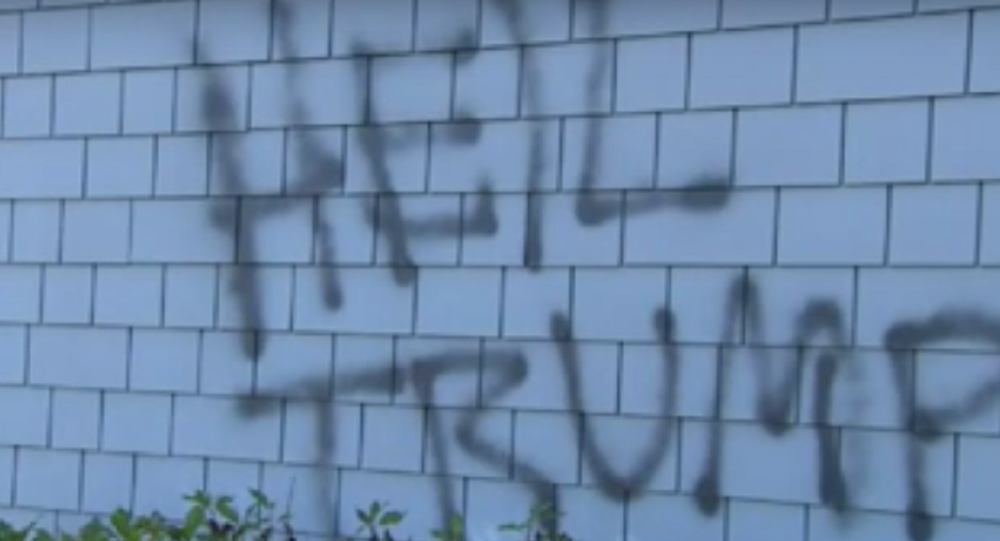 Hateful graffiti that was spray painted on an Indianapolis church in November has been revealed to be a “false flag” to spread fear, done by someone opposed to Donald Trump winning the presidency.

© AFP 2020 / Paul J. Richards
Michigan Man Lied About Iraqi Mom Dying After Trump’s Immigration Order
The vandalism, which included the words “Heil Trump” and a gay slur, was actually done by George Nathaniel Stang, 26, who is a gay man himself, and a member of the church.

On Wednesday, Stang was charged with a misdemeanor by Brown County Prosecutor Ted Adams.

Stang claims that he vandalized St. David's Episcopal Church in an attempt to upset people into “mobilizing a movement” after the election.

"Over the course of that week, I was fearful, scared and alone, too, in my fear," Stang told the Indianapolis Star Tribune. "I guess one of the driving factors behind me committing the act was that I wanted other people to be scared with me."

Stang claims that he now realizes what he did was wrong.

"I'm very sad to have created more hate in a world that already has too much hate," Stang said. "The congregation doesn't deserve it, the emotional turmoil I put them through.”

Stang also wanted to be clear that he didn’t intend harm to the church.

"To be clear, my actions were not motivated by hate for the church or its congregation," Stang wrote in a statement for police. "I suppose I wanted to give local people a reason to fight for good even if it was a false flag. I of course realize now that this was NOT the way to go about inspiring activism."

The church has also issued a statement regarding what Stang did.

"Nathan is a member of our St. David's family, and naturally there is a certain amount of betrayal with this act," Rev. Kelsey Hutto, pastor in charge at St. David's wrote in a statement. "Over the coming weeks and days, we will process our emotions regarding this hurtful act."

Ruben Diaz
Disgraced Reporter Arrested for Terrorizing Jewish Community Centers
There have been many similar cases since the election of Donald Trump as US president on November 8.

In March, police in Schenectady, New York arrested Andrew King, a man who made the rounds on local television stations expressing his fear about being targeted for his Jewish faith, for filing a false report after spray painting swastikas on his own home.

In another recent example, Yasmin Seweid, 18, was arrested after it turned out that her viral story about being attacked on the New York subway by three white men shouting support for Trump while attempting to snatch her head scarf was a lie. She has been charged with filing a false report and faces up to one year in prison if convicted.

US Students Must Sign Out Toilet Paper After Vandalism

Infuriated Man Gets Punished by the Elevator He Vandalized