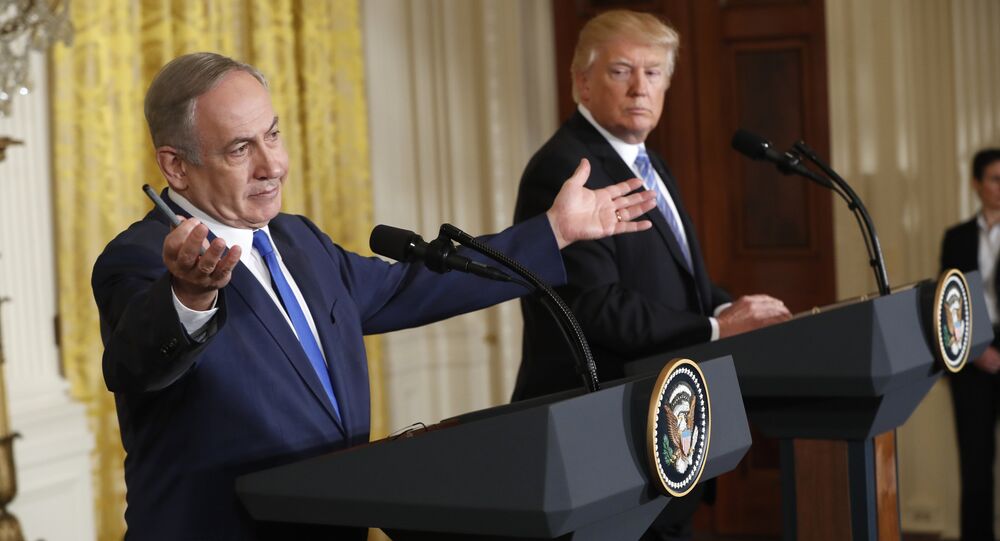 US President Donald Trump is mulling over the implications of moving the US embassy in Israel from Tel Aviv to Jerusalem, as he promised he would during his tumultuous presidential campaign.

Mr. Trump is reportedly concerned over the impact the move would have upon his chances of brokering a stillborn peace deal between the Israelis and Palestinians, said Secretary of State Rex Tilllerson on Sunday, May 14.

"The president is being very careful to understand how such a decision would impact a peace process," Tillerson said.

Secretary of State Tillerson's comments come on the heels of those made by National Security Adviser H.R. McMaster on Friday, May 12, that the president will express his support for Palestinian "self-determination" during a Middle East trip later in May. The comments come nine days after Palestinian President Mahmoud Abbas visited the White House and seem to suggest the US president might now be amenable to the possibility of a two-state solution.

Palestinians threaten violence if US moves embassy to #Jerusalem. Threats must not stop US from doing what is right & just. @realDonaldTrump

Israel has long regarded the entire city of Jerusalem as its eternal and undivided capital and has designs to eventually move all foreign embassies from Tel Aviv to the ancient city. The relocation plans are, however, strongly opposed by many countries, while the Palestinians claim the east of the city as their capital.

Israel has however moved fast to dismiss the concerns of the Trump administration over the embassy move, proclaiming that it would actually improve the chances of peace with the Palestinians, not hinder them.

"Israel's position has been stated many times to the American administration and to the world. Moving the American embassy to Jerusalem would not harm the peace process. On the contrary it would advance it by correcting an historical injustice and by shattering the Palestinian fantasy that Jerusalem is not the capital of Israel," Prime Minister Netanyahu said in a statement.

The comments appear to mark the first public disagreement between Israel and the Trump administration, and could prove to be a bone of contention if not remedied swiftly. Much of the Israeli right, including members of Netanyahu's ruling Likud Party, welcomed the victory of Trump precisely because of his campaign proclamation that he would move the US embassy from its current location in Tel Aviv to Jerusalem. If Trump rescinds on this move, it is likely that his reputation within Israel would be ruptured, and he could be seen as just another US president who has used talk of major foreign policy changes in favor of Israel as a convenient campaigning point.

© AFP 2021 / Jack Guez
A picture taken on December 28, 2016 shows the US Embassy building in the Israeli coastal city of Tel Aviv.

Trump's comments come only one week before he scheduled to make his first official visit to Israel, which will also be his first overseas trip as US President. Trump and a White House entourage are also expected to visit Saudi Arabia, his first stop, where he will encourage Arab allies to take "bold steps" to confronting what is widely perceived as the threat of Iran. Israel-Palestine will inevitably however, be on the agenda for discussion.

It is likely that Saudi Arabia will use its influential position in US foreign policy to try and convince the Trump administration not to move the US embassy, for fear of causing unrest among the Palestinians, which could then resonate in Saudi Arabia.

Foreign policy analysts will watch Trump's meetings with the Israeli and Palestinian leadership with keen eyes, eager to see whether he begins to formulate a cohesive strategy to breath life back into the sterile negotiations.

© REUTERS / Carlos Barria
Trump to Invite Netanyahu, Abbas for Peace Talks in US
Reportedly, confidence among analysts that Trump will successfully broker peace, is low. He has, on numerous occasions, expressed America's "unshakable bond to the Jewish state," and left Palestinians disappointed after his May 3 press conference with Abbas, in which he failed to mention the two-state solution. In December 2016, Trump also blasted a UN Security Council resolution that condemned illegal Israeli settlement expansions in the occupied West Bank. Trump has also said that the UN member states treat Israel "very, very unfairly" at the security council.

Back in January, Abbas warned Trump that moving the US embassy to Jerusalem would have a "disastrous impact on the peace process, on the two-state solution and on the stability and security of the entire region."

It will soon become apparent whether President Trump heeds that call. Whether he decides to or not, one thing is for sure: that deciding against the embassy move will not on its own be enough to facilitate serious negotiations between both sides.

Other contentious issues, namely the continued illegal expansion of Jewish-only settlements on annexed Palestinian land, will need to cease. Considering that the Trump administration recently swore in a staunchly pro-settler ambassador to Israel, who has said that the settlements do not constitute a threat to peace, the chances of seriously starting negotiations do not bode well.

Israel: Trump Administration Has Saved Us From Being UN’s 'Punching Bag'