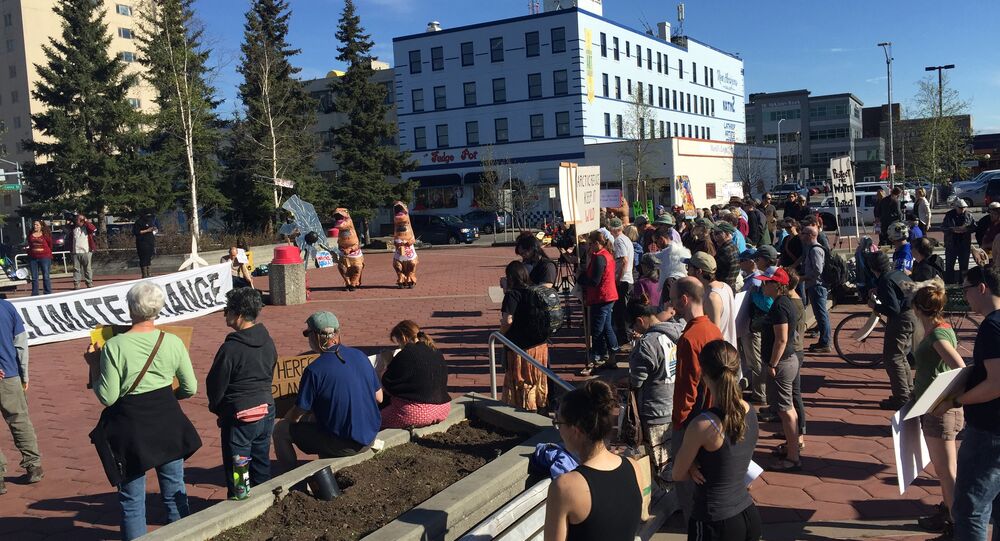 About two hundred people took to the streets of one of the biggest cities of Alaska, Fairbanks, to protest against climate change in the run-up to the Arctic Council meeting.

FAIRBANKS (Sputnik) — Some 200 people gathered in downtown of Fairbanks, Alaska on Wednesday evening to protest against climate change on the eve of the Arctic Council Ministerial, scheduled for May 11.

Protesters were holding banners saying "Facts Matter," "Denial is not an option," and "Save Paris agreement."

© Sputnik / Liudmila Chernova
Protesters holding banners in Fairbanks, Alaska, on the eve of the Arctic Council Ministerial, scheduled for May 11

Riley Witte, a student at the University of Alaska Fairbanks, held a sign in Russian, saying "Rexon, Hands away from our homeland." She told Sputnik she came to protest both drilling that could be catastrophic and climate change.

"I have my sign in Russian because I think we have many things in common when it comes to what we need from life and what we call a healthy and happy community," Witte said. "We are protesting climate change, and we are asking people of all Arctic nations to stand up and do whatever we can to stop climate change."

© AP Photo / U.S. Environmental Protection Agency
Alaska Natives Vow to Keep Fighting Against Drilling Under Trump Administration
One of the rally organizers and executive director of Gwich'in Steering Committee, Bernadette Demientieff, told Sputnik that among the groups that came out to the protest were Climate Justice, Native Movement, as well as Defend the Sacred. She said that the people in Alaska living off fish and animals were already seeing changes, like contaminated fish.

"If they wipe our food security, they will wipe us out," she warned. "We want them [politicians] to stay in Paris Agreement."

Demientieff explained that protesters had gathered in the Alaskan city to let the Arctic Council know that people cared about their home. "Being in Alaska we are experiencing all the changes. People don't understand that we are in ground zero for climate change," she said.

"We do not want people that do not live here, do not understand what we are going through make decisions for us. Our elders are our scientists, our teachers, and they don't have a place at the table for decisions. And that is not right. We are here to demand climate justice," she stated.

© AP Photo / Pablo Martinez Monsivais
Hundreds of Thousands March Against Climate Change, Trump's Environmental Policies
The rally then moved to the place where the welcome reception for the ministerial is taking place. The protest was peaceful, and no police was seen nearby.

The intergovernmental group aims to facilitate cooperation among the eight states and Arctic indigenous communities and focuses on sustainable development and environmental protection of the region.