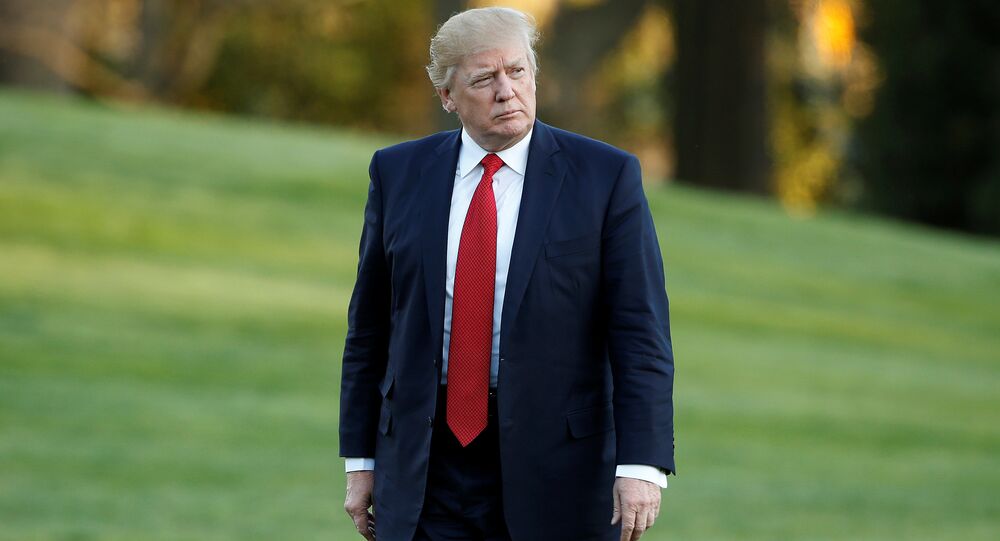 US President Trump's sudden decision to fire FBI Director James Comey resembles the dismissal of the Watergate special prosecutor in 1973 by President Nixon, political observers say, as it triggered new attacks on the American leader.

WASHINGTON (Sputnik) — The unexpected firing of FBI Director James Comey has inspired President Donald Trump’s enemies from all sides of the political spectrum to renew their attacks on him, US analysts told Sputnik.

“When Trump fired FBI Director Comey, that has opened the door for all of his political opponents who are growing by the minute,” University of Houston Chair of History and African American Studies Professor Gerald Horne said on Wednesday.

Trump was under fire for his shock move in firing Comey who had generated controversy over his confusing signals about investigating Democratic candidate Hillary Clinton’s email scandal during the 2016 presidential campaign and over probing the Trump campaign’s alleged links to Russia, Horne noted.

© AP Photo / Cliff Owen
Before Getting Axed, Ex-FBI Chief Reportedly Sought More Funds for Russia Probe
“Trump is being attacked by both Democrats and Republicans… This is very serious. It reflects the unpredictability and impulsiveness of Donald J. Trump which has gotten him into trouble since he won,” he said.

Trump’s firing of Comey had reopened attacks on him after he had gone far to reassure liberal interventionists by his support for NATO, his backing away from improving relations with Russia and his cruise missile strikes against a Syrian air base, Horne recalled.

“Mr. Trump’s past is catching up with him… [However] It is still unclear whether Mr. Trump or his opponents will prevail,” Horne observed.

However Trump still retained his solid base of support in the white working and middle classes, Horne pointed out.

© AFP 2021 / Nicholas Kamm
'Stakes Are High' in DC 'Struggle': FBI Chief's Dismissal is 'Just the Beginning'
“The base is sticking by him. They despise the media enemies of Trump… This also serves to restrain Republican congressmen and even senators who fear grassroots populist challengers in the primary elections of 2018 if they are seen as too openly hostile to Trump,” Horne said.

Independent Institute Center for Peace and Freedom Director Ivan Eland agreed that the firing of Comey was a high risk move for Trump that had encouraged his many political enemies.

“If nothing else, the optics of the firing resembles the firing of the Watergate special prosecutor in 1973,” he warned.

Trump could find himself politically crippled by widespread and growing distrust even if no hard evidence emerged of any wrong-doing or improprieties between himself, senior campaign aides and insiders with Russia, Eland cautioned.

“The circumstantial evidence of meetings between Russians and several people linked to the campaign and the perception of Trump's seeming efforts to obstruct the inquiry may impair his presidency, if revelations continue to come out drip by drip,” he said.

In addition, Trump or his associates may be skewered for any cover-up, even if collusion is never demonstrated, Eland suggested.

Russian FM Lavrov on FBI Chief's Dismissal: Are You Kidding Me?