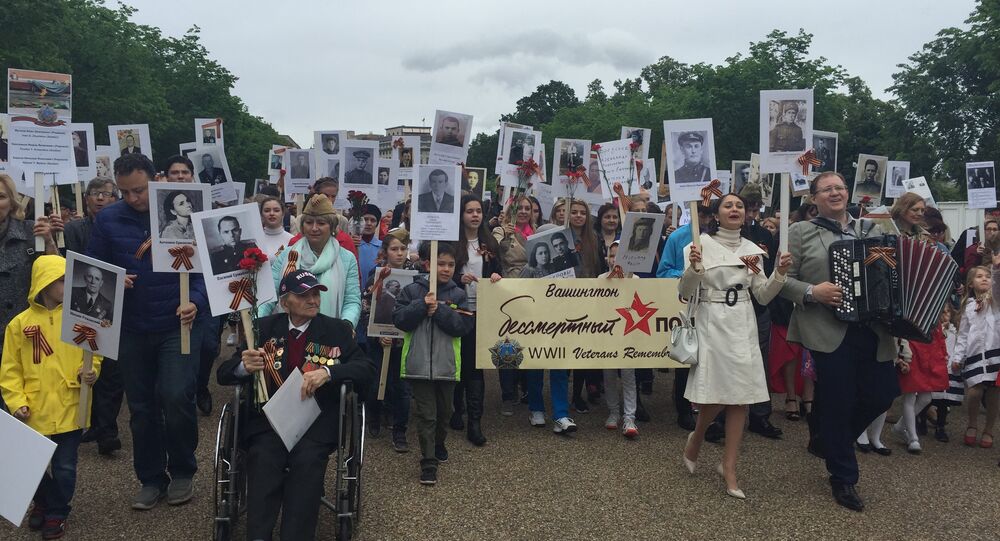 Hundreds of people marched down the central streets of Washington DC as part of the "Immortal Regiment" march on Saturday afternoon to honor those who fought against Nazism in the World War II.

© Photo : Pixabay
Mexico Holds 'Wall of Memory' Commemoration Event Ahead of Victory Day
WASHINGTON (Sputnik) — Despite the rain and chilly weather, several hundred young and older people, children and veterans took part in the event. The march was attended by people from the United States, Eastern Europe, Russia and former Soviet republics.

Anna Rozhke, currently living in Maryland, told Sputnik she came to the March to honor her relatives who fought in the WWII.

"I am holding the photos of my father Viktor Konusov who fought in the WWII and came back, his brother Alexander who went missing but most likely was killed, and my grandfather Ivan Zlobin who also went missing and we think he was killed. I came today because it is a big important holiday for everyone in Russia and abroad, who remember history and don't want it to repeat," Rozhke said.

Tim Rush who was carrying the photo of his uncle who took part in the war, told Sputnik that he came to the March to show solidarity with the military of the countries that united during the WWII against fascism.

"This is the photograph of my uncle Alen Pifer who fought in the World War II, and on May 6, 1945 he was part of the US troops that liberated the concentration camp in Austria. I am here in solidarity with soldiers in the United States, Russia and other nations. Today, the fighting against terrorism should bring our nations back together again. I thought it was very positive what [Russian President] Vladimir Putin brought to the United Nations in September a year and a half ago saying ‘Let us reconstruct the kind of cooperation in WWII to confront the terrorism today,’" Rush said.

Anita Gallager from Virginia told Sputnik it was important for her to come to the March because her father participated in the war, and also because she wanted the US-Russia alliance to be restored.

"This is my father Frank Gretz. I am here because he was in the war, he was a soldier, and because I want to rekindle an alliance between American and Russian people. I think we have a lot in common," Gallager said.

The march, held in the US capital for the second time, was accompanied by the songs of the WWII period sung by the participants to the music played by a bayan player.

The group was headed by the WWII veteran and walked from the White House to the World War II Memorial where they laid flowers and wreaths.

People were carrying photos of their ancestors who participated in the war.

Amanda Jane Getty
'Immortal Regiment' Marches Honoring Victory Day Kicking Off Across US
The event concluded with a wartime songs concert performed by the children of the Russian language schools both in Russian and English.

This year, 22 US cities are hosting the "Immortal Regiment" marches, including New York City, San Francisco, Seattle, and Chicago.

Russia’s Silver Voice Pogudin to Perform for Compatriots in Washington