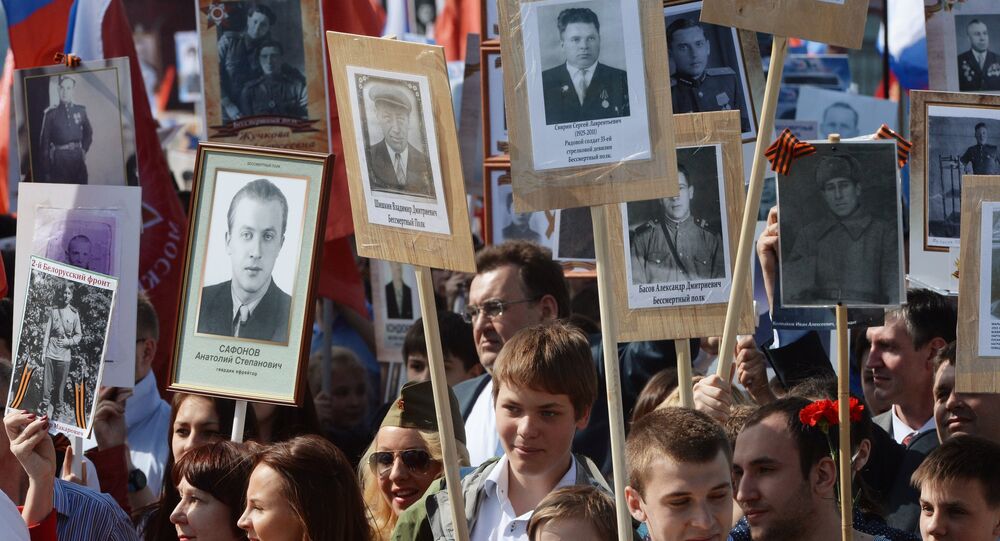 The coordinators of the Immortal Regiment in Washington DC expect hundreds of people to participate in this year’s march.

WASHINGTON (Sputnik) — The coordinators of the Immortal Regiment in Washington DC anticipate more than 600 people to take part in this year’s march, Yekaterina Hill, an organizer of the event in the US capital, told Sputnik.

"This year we will hold the Immortal Regiment march on May 6 for the second time in Washington, and we expect some 650 people to participate in it," Hill said, noting that in 2016 there were a lot more participants than they had expected.

Hill also expressed hope that Russian and US veterans would be able to come.

According to Hill, people would gather by the White House on Saturday at 03:30 p.m. local time (07:30 GMT), and then would march to the World War II Memorial.

"The march will kick off with a speech by a Russian veteran… We will distribute St. George ribbons, take some pictures and will start walking. This time, we received a permission to walk on the road which will be closed to traffic this year," the organizer said.

She noted that the march would be accompanied by the songs of the WWII period sung by the participants to the music played by a bayan player.

Hill said that this year the Immortal Regiment march would be held in some 20 locations across the United States as compared to the nine cities in 2016, in particular, Boston, Philadelphia and Los Angeles would host the event for the first time this year.

"This year, the event will conclude with a wartime songs concert at the World War II Memorial. The songs will be sung in both Russian and English to the accordion," Hill said.

Hill explained that the songs will be performed by the children of the Russian language schools, including Metaphor and Erudite.

© Sputnik / Alexey Malgavko
Estonian ‘Immortal Regiment’ March Organizer Questioned for 14 Hours
The Immortal Regiment is a patriotic initiative that commemorates WWII soldiers in marches held across Russia and other countries on May 9, celebrated as Victory Day in Russia and the former Soviet republics. During the marches, people carry photographs of their ancestors who participated in the war.

About 2,000 People Take Part in Immortal Regiment March on V-Day in London

Over 40,000 People Partake in 'Immortal Regiment' March in Simferopol