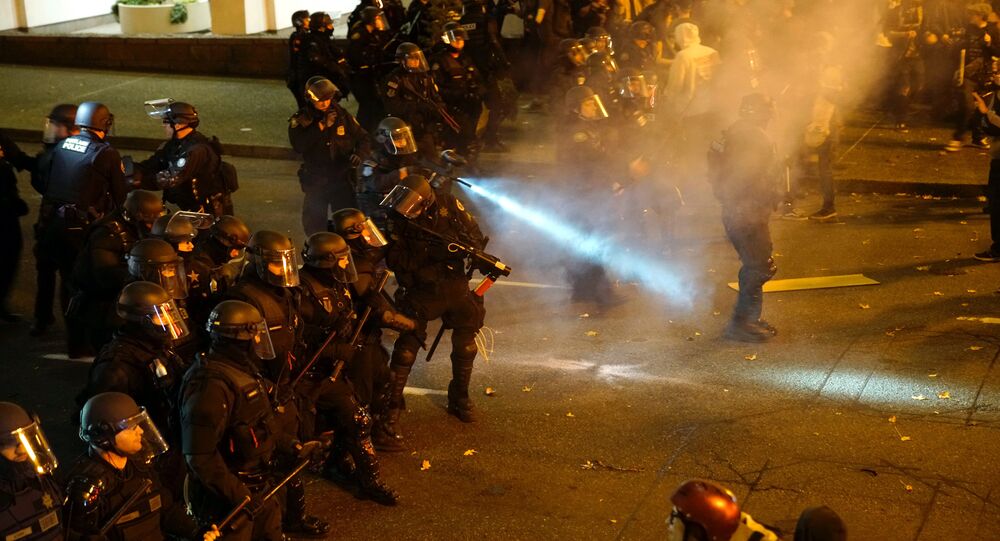 May Day parade with thousands of participants in Portland turned into a riot after self-proclaimed anti-fascist protesters set fires in intersections, damaged property, and attacked law enforcement officers and vehicles.

© AP Photo / Mike Segar
Arrests Made in Tense May Day Protest in New York City (PHOTOS)
PORTLAND (Sputnik) — A peaceful May Day parade with over 5,000 participants in the US state of Oregon's largest city of Portland turned into a riot after self-proclaimed anti-fascist protesters set fires in intersections, damaged property, and attacked law enforcement officers and vehicles, the Portland Police said in a statement.

The May Day parade began at noon local time and participants were given permits to hold the event, but by 4:00 p.m. some 100 anarchists began throwing rocks and other projectiles at police, local KATU2 news reported.

Police dressed in riot gear immediately annulled the permit and deemed the protest a riot and began dispersing the protestors, the report added.

Law enforcement officers warned peaceful protestors, who were marching with family members including children, over bullhorns to vacate the area before riot police moved in, according to the report.

Fires were set on the intersection of 4th and Morrison using newspaper dispensers and patio furniture from nearby outdoor seating at restaurants, according to the report, then police began firing flash bangs at rioters, KATU2 noted.

Police forces instructed city buses that had passengers still on board to block streets near the area of the violence, KATU2 added.

Later, police said in a statement on Twitter that the riot subsided and there are no reports so far of injuries.