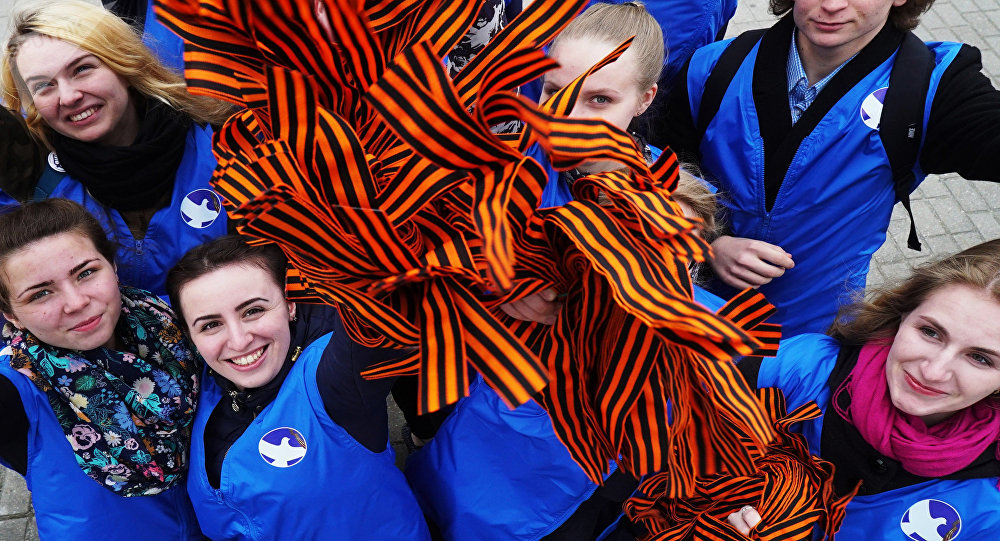 St. George Ribbon Campaign Kicking Off in US Ahead of Victory Day

The St. George Ribbon campaign to distribute black-and-orange ribbons - a symbol of the Soviet victory in World War II - is starting on Tuesday in Washington, DC and New York City, which will be joined by more than 30 cities across the country ahead of the Victory Day.

WASHINGTON (Sputnik) — The black-and-orange colors of the campaign's token ribbons mimic those of a Soviet-time and later Russian decoration that was awarded for acts of valor on WWII battlefields. It has since become a manifestation of Soviet military valor in the Great Patriotic War (1941-1945), and most recently a patriotic symbol.

Second Secretary of the Russian Embassy in the United States Ekaterina Akulcheva told Sputnik the event that has already become annual in the US capital will be held near the White House following the wreath-laying ceremony at the Arlington Cemetery marking the anniversary of the “Meeting at the Elbe.”

“Some 40 young people will start distributing ribbons at around noon, and plan to hand out at least 500,” Akulcheva noted.

The secretary noted that in the upcoming days the ribbons will also be distributed in the Russian-language schools.

“Moreover, this year for the first time the Russian schoolchildren will be going to the US schools to talk about that symbol, to hold the so-called ‘lesson of courage’ to the Americans,” Akulcheva announced. “We plan to attend 10 US schools in Washington, Maryland and Virginia, and distribute some 3,000 ribbons.”

The event to mark the beginning of the St. George Ribbon campaign will be also held in New York on Tuesday.

Akulcheva shared that during the "Immortal Regiment" march over Brooklyn Bridge on May 6 the plane carrying a 30-meter long ribbon will be flying over the participants.

Director General of Rossiya Segodnya Dmitry Kiselev announced the beginning of the 2017 St. George Ribbon campaign on Monday, and said that this year some 90 countries will participate in it. 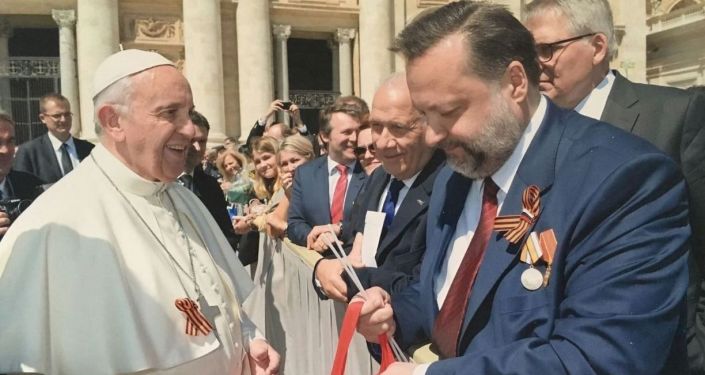 © Photo : Photo courtesy of Pavel Dorohin
‘Token of Solidarity’: Pope Francis Puts On St. George Ribbon
Since the campaign was initiated in 2005, the St. George ribbons have been distributed not only in Russia but also in other countries, by Russia's Federal Agency for the Commonwealth of Independent States, Compatriots Living Abroad and International Humanitarian Cooperation (Rossotrudnichestvo).

In the United States, the initiative is run under the auspices of also the Coordinating Council of Russian Compatriots of the USA.

The beginning of the campaign in the United States also coincides with the 72nd anniversary of Elbe Day, when US and Soviet troops met at the Elbe River in Germany.

St. George Ribbon Should Be Treated Alongside Russia's National Flag