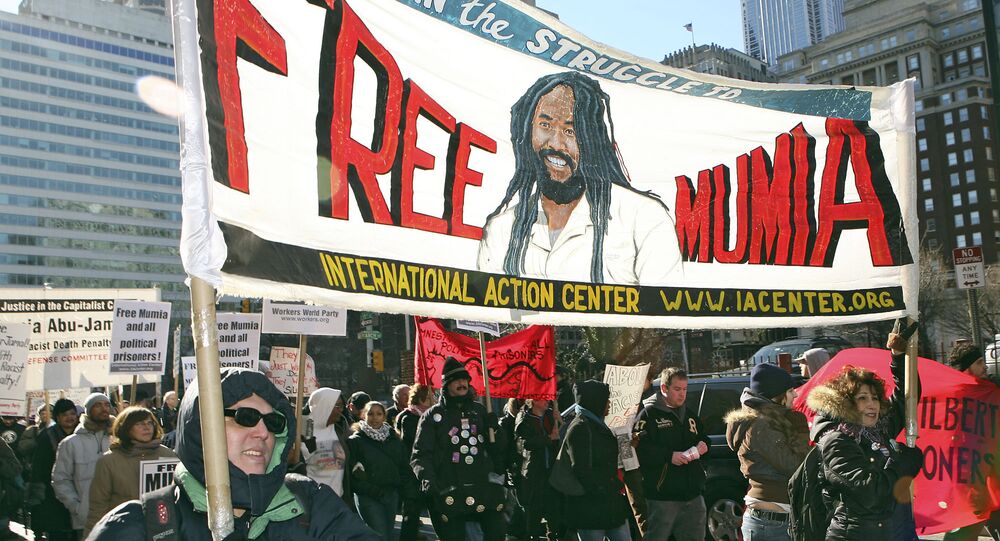 Political Prisoner: Mumia Challenges System That Railroaded Him Behind Bars

On Monday, former Black Panther and political prisoner Mumia Abu Jamal appeared in a Philadelphia courtroom, in an attempt to challenge previously denied appeals on his life sentence for the shooting death of Police Officer Daniel Faulkner, a crime Mumia and his supporters maintain he did not commit.

On Mumia’s 63rd birthday, Radio Sputnik’s Loud & Clear spoke with Noelle Hanrahan of Prison Radio, Ramona Africa of the MOVE organization and scholar-activist Dr. Anthony Monteiro, about Mumia’s case and how continues to shine as an example of tenacity against the most strident kind of state repression.

​Africa said that demonstrations in support of Mumia on his birthday were not simply a commemoration, but  "A celebration and affirmation of life that Mumia is still alive when this government fully intended to kill him in December of 1981, again through legal execution in August of ‘95, and finally in prison by knowing he has Hepatitis C and refusing to treat him."

Dr. Monterio reiterated that Mumia was imprisoned unjustly, commenting that he “is an innocent man who is being persecuted and is imprisoned, and they wanted to kill him by lethal injection because he has been, since his youth, as a political activist, and the imprisonment of Mumia is an act of revenge carried out by the police in Philadelphia."

He added that his arrest and imprisonment "Was not just an attack upon him, it was an attack against all the movements of resistance and for progress in the Black community."

One of things that put Mumia at odds with local police and the notoriously racist administration of former Philadelphia mayor Frank Rizzo, was his sympathetic coverage of MOVE, a predominately Black militant organization. In May 1985, a clash with the police came to a head when a bomb was dropped on MOVE’s headquarters, killing 5 children, 6 adults and countless animals. Ramona Africa was the only adult survivor.

Even from behind bars, Mumia continues his commentary on issues both domestic and foreign, oftentimes having an analysis unseen in mainstream media. During the controversial 2016 election, he said in a recording, "Name your devil, I’ve never seen an election like this, ever. The stakes are sky high, yes, but the options are bottom low, especially for Black folks. None promise relief from the hell we inhabit in communities across America, and as ever, Black folks hold the key, but to what? Certainly not our freedom. Mass incarceration is still a foreboding shadow over all our lives. An incubus that sucks the lives out of millions, even after 8 years of the first Black president. Cops are just wilding, a blue riot of unfettered impunity, and they mostly remain as untouched as ever."

Montero pointed out that, in his commentaries, Mumia is "always looking at the systemic foundations of the problems that African-Americans face, and this goes back to his days in the Black Panther Party and their revolutionary critique of American capitalism, and their answers were that black people would not be freed by Black capitalism, would not be freed by black politicians, but would be freed by the power of the people and the overturning of capitalism and Mumia is still true to that."

Lukashenko says ready to deport all political prisoners to EU