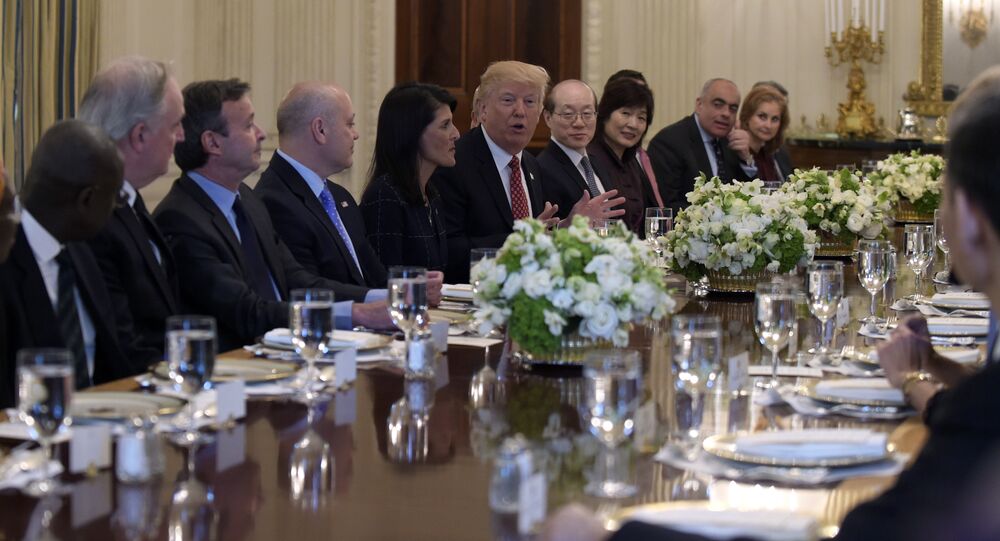 The UN Security Council should be ready to issue a set of new punitive measures against North Korea, US President Donald Trump said prior to a working lunch with ambassadors of the Council’s 14 member states on Monday.

WASHINGTON (Sputnik) — Trump underlined that North Korea remains "a real threat to the world" and a problem that must be resolved as soon as possible.

"The status quo on North Korea is unacceptable and the Council must be prepared to impose additional and stronger sanctions on North Korean nuclear and ballistic missile programs," Trump told reporters.

© Sputnik / Iliya Pitalev
China Calls DPRK, US to 'Push the Brakes' as Tensions Rise on Korean Peninsula
Earlier on Monday, US Ambassador to the UN Nikki Haley stated that North Korean leader Kim Jong Un should not take any provocative actions that may cause retaliation against him with US military force.

On April 14, media reported that Trump might direct a military strike against Pyongyang if the country's leadership decides to launch another nuclear weapon test.

The North Korean General Staff responded with threats of a "preemptive strike" against US military bases in Japan and South Korea, as well as the presidential residence in Seoul in case of US aggression.

© Flickr / U.S. Pacific Fleet
F-18 Jet From USS Carl Vinson Heading to N Korea Crashes Near Philippines
The Pentagon sent the naval group from Singapore toward North Korea earlier in April amid tensions on the Korean Peninsula. US President Donald Trump said an "armada" has been sent, but the date and time of the drill remains unknown.

After it turned out that the Carl Vinson deployed to deter North Korea did not reach the Sea of Japan reportedly because White House and Pentagon failed to communicate effectively and was spotted near Indonesia, it was reported that it will finally reach the Korean Peninsula later this month. The armada's current location is unknown.