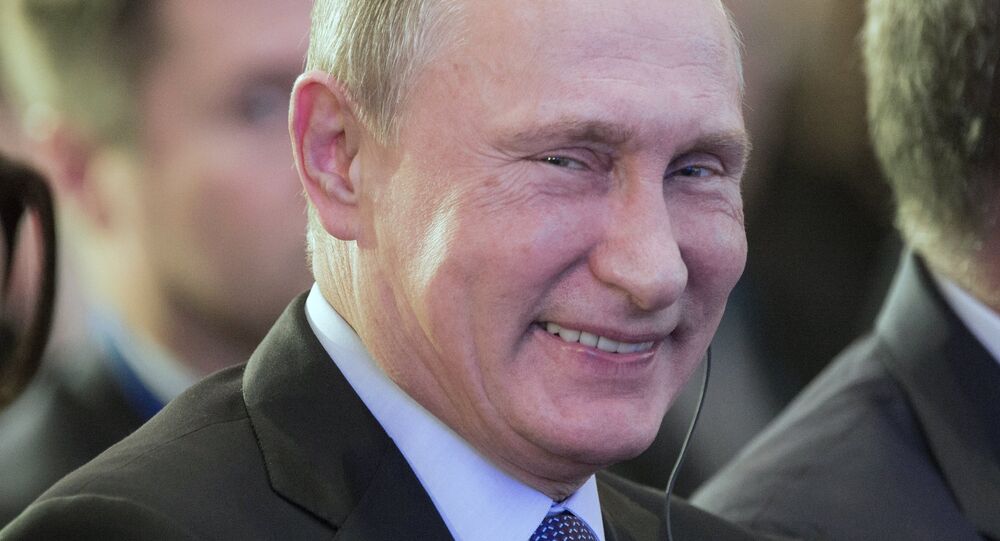 US Democrats’ Hysterical New Low: Vladimir Putin Is Laughing at Us!

A Democratic organization is attempting to pressure Republicans to support their Russian witch hunt with a series of absurdly cartoonish radio ads claiming that Russian President Vladimir Putin is “laughing at us.”

The organization, American Bridge 21st Century Foundation, is running the ads in the districts of three House Republicans – Rep. Martha McSally, Rep. Will Hurd and Rep. John Katko – in the hopes that they will support an investigation into US President Donald Trump’s alleged ties to Russia.

© AP Photo / Evan Vucci
Watchdog Sues Justice Dept for Docs on Russia ‘Links,’ Trump’s Surveillance Claims
“The country overwhelmingly wants an independent commission investigating the growing scandal surrounding Donald Trump’s ties to Russia and we’re going to hold Republicans accountable for standing in the way. Republicans who refuse to put country ahead of party are doing so at their own peril,” American Bridge President Jessica Mackler said in a statement about the ad campaign.

The Democratic organization typically focuses on opposition research and is spending $140,000 on the commercials, according a report from McClatchy.

The minute-long ads begin with the sound of a voice laughing, followed by Russian speech.

“That’s the sound of the Russians and Vladimir Putin laughing at us,” a voice says. “Because they’re getting away with undermining our democracy.”

© AP Photo / J. Scott Applewhite
US Congresswoman Waters Returns With New Hit: Putin, Trump 'Tied at the Hip'
The narrator then asks what the lawmakers are doing about it, and asserts that it is “nothing.”

The ad insists Trump’s former campaign manager Paul Manafort received money from a pro-Russia party in Ukraine, and cites National Security Adviser Michael Flynn’s resignation after his private phone call with the Russian ambassador was leaked to the press.

“The joke’s on you, America,” the cartoonish Russian voice says while laughing.

But with such an overtly absurd attempt to get voters scared, we can’t help but think the joke’s on US Democrats.

Lavrov: Russia to Be Guided by Trump's Statements on Desire to Improve Ties

US-Russia Relations: 'What We Have Seen is Capitulation on Trump's Part'