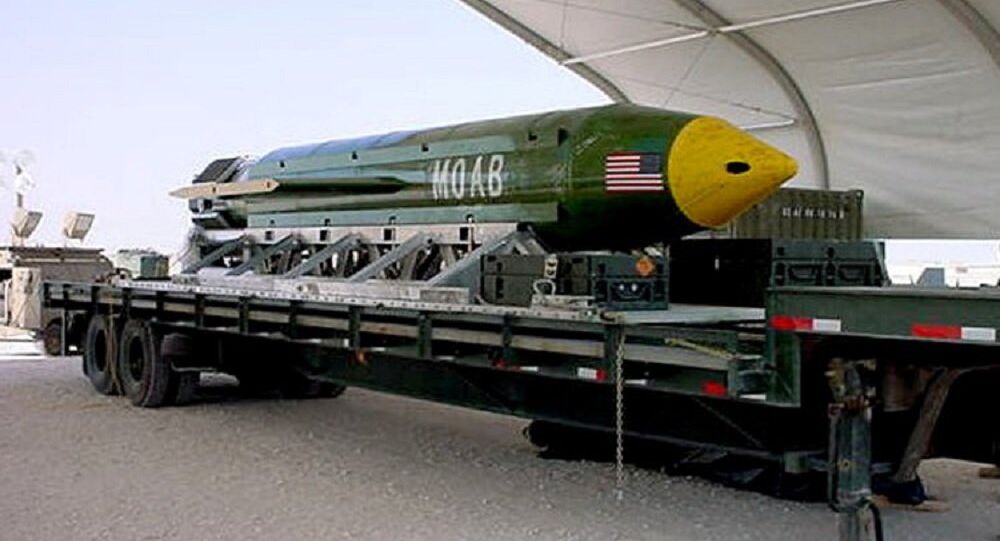 Following the US "Mother of all Bombs' strike in Afghanistan earlier this week the Pentagon published a video demonstrating a test of a powerful non-nuclear bomb. As political analyst Igor Shatrov told Sputnik Radio, the US is becoming prone to “spectacular” gestures under the new administration.

The US Air Force published a video showing the test of the most powerful non-nuclear bomb GBU-43/B in the US arsenal, which they have dubbed as the “Mother of All Bombs.”

The tests were conducted back in 2003 in Florida; however the video appeared only after the US dropped the bomb on the alleged Daesh headquarters in Afghanistan on April 13.

According to a political analyst and the deputy director of the National Institute for the Development of Contemporary Ideology, Igor Shatrov, Washington is becoming prone to “spectacular gestures.”

“This event was in fact a bomb testing because it was its first combat use ever. In this regard, we saw a certain position, a certain new feature of Trump and that is that he is inclined to spectacular gestures with the use of the armed forces,” Shartov said.

The analyst said that recent events, including the sending of maritime troops to North Korea and the bombing in Afghanistan were done “not for a result, but for show.”

YouTube/JustInfortheTruth
Daesh Suffers No Casualties in MOAB Bombing in Afghanistan - Reports
He added that “it seems to me that we will see such spectacular, dramatic but dangerous gestures a lot during Trump’s rule.”

The analyst said that the United States demonstrated that they have a powerful weapon. It kept emphasizing that it is a non-nuclear bomb and of course, “it is a signal to the whole world and Russia, in particular. All of this is called ‘saber-rattling,’” Shatrov said.

In his opinion, the timing of the MOAB attack was carried out on the eve of the international conference in Afghanistan, which will be held in Moscow and that is no coincidence.

“The United States is afraid of being in second place and therefore it does not agree to participate in the conference in Moscow, where, in their opinion, Russia will lead,” the analyst said.

He further said that the US has no policy, no definite approach to any sort of solution to the Afghanistan problem, except using weapons.

“Therefore, the US is not ready to participate in the negotiation process just like we are seeing in Syria and North Korea. The US has once again started to flex its muscles. We are not observing any negotiating policy in any direction,” the analyst concluded.

On Thursday, a 22,000-pound GBU-43, or MOAB bomb, which is the largest non-nuclear bomb in the US military arsenal, was dropped from a C-130 military airlift aircraft, targeting an underground complex and tunnels in the Afghan province of Nangahar believed to be used by the Daesh terrorist group.