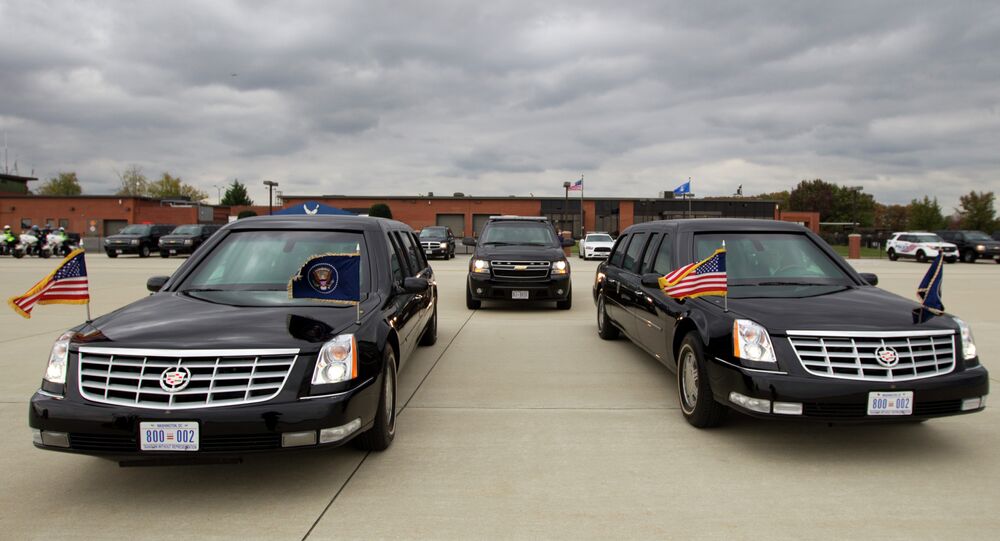 The Beast has been seen undergoing final tests.

© REUTERS / Mark Kauzlarich
The New ‘Beast’ – Trump to Get Upgraded Presidential Limo on Inauguration Day
The presidential limousine, known as "The Beast," has been seen undergoing testing by Motor Authority. It was spotted, wrapped in camouflage, on April 4.

The new limousine is has been in development since 2013, when the contract was awarded to General Motors. It was supposed to be ready for President Trump's inauguration, but delivery was postponed. The new Beast will be ready later this year, MA reported.

The US presidential vehicles, all nicknamed "The Beast" since the presidency of George W. Bush, are built in high secrecy, in order to prevent vital information from falling into the wrong hands. Unfortunately for car enthusiasts, models also destroyed under the supervision of the Secret Service after they're decommissioned. So very little is known about the upcoming vehicle.

SPIED 👀 We have great images of The Beast, the next-gen, $1.5M presidential limo that's bristling with secretshttps://t.co/e08JREYGUi 🇺🇸 pic.twitter.com/b7uzMEceQS

​What is known is that, despite looking like a classy sedan, the car is in fact built atop a truck chassis to handle the weight of extensive armoring. Every piece is reinforced — "from the roof down to the tread of the tires," to keep the president safe, according to MA.

"The panels are likely to be made from a mix of materials including steel, aluminum, titanium and ceramic to help break up projectiles aimed at the car," the report reads.

© AP Photo / Adrees Latif
Limo Torched in Anti-Trump Protests in DC Belongs to Muslim Immigrant
The vehicle is known to feature a fire suppression system and an armored fuel tank filled with foam to prevent explosion, an autonomous oxygen system and an airtight interior in case of gas attack. President Barack Obama's Beast even stored some of POTUS' own blood in case of the medical emergency.

But here's where things get really cool. The current model also boasts rocket-propelled grenades, night vision optics, a tear gas cannon and "multi-spectrum infrared smoke grenades as a counter-measure to a rocket-propelled grenade attack or anti-tank missiles," the Daily Mail reported in 2011. It also has a batch of conventional pump-action shotguns in case things go really bad.

The total development cost is unknown, but as of January 2016, GM has received almost $16 million for its development. Each car is thought to cost between 1 and $1.5 million, and the manufacturer will supply a handful to the Secret Service, since at least two cars are used at a time in the presidential motorcade, to make it more difficult to guess which car actually carries the president.

Russian President Vladimir Putin is also expected to receive a new presidential limo later this year. Developed under codename Project Kortezh, it is a joint development by a number of Russian car and truck manufacturers — and, of course, we are looking forward to comparing the two limos.