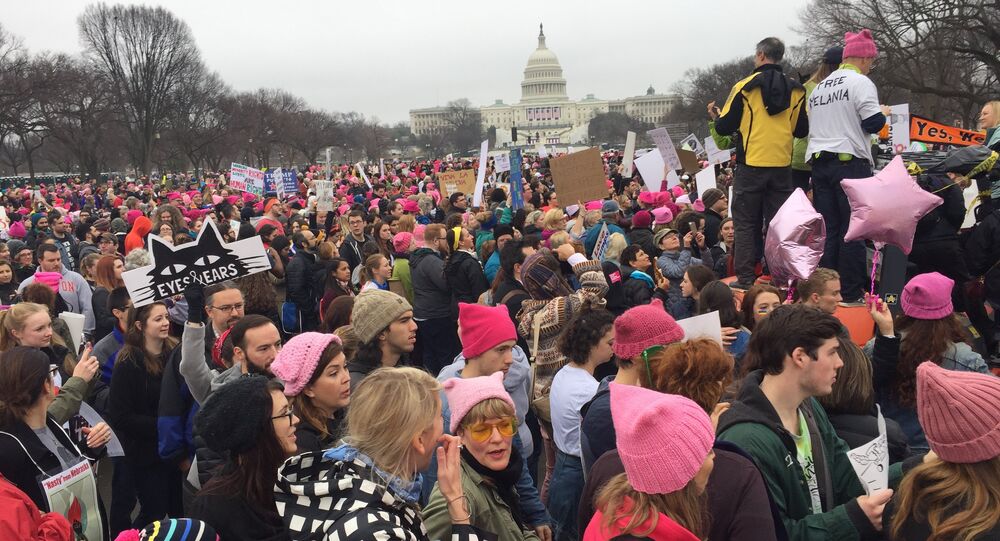 With so many Americans dissatisfied with the Trump White House, it’s a wonder the country doesn’t implode out of frustration. Now experts at the United Nations have warned that US citizens better get their protest on sooner than later, as that right, embedded by the US Constitution into the American psyche, may be in danger of being rescinded.

Since the election of US President Donald Trump, at least 19 states have introduced new laws that would curtail the rights of citizens to protest, gather peaceably, and express themselves freely without fear of arrest — or worse.

Pointing to an "alarming and undemocratic" shift, UN human rights investigators this week have noted the many new anti-protest bills seeking to criminalize gatherings, and stand in the way of a citizen's right to peaceful assembly and freedom of expression, according to Common Dreams.

Two independent UN representatives, Maina Kiai, who studies the freedom of peaceable assembly, and David Kaye, who covers freedom of expression, have warned lawmakers in the US of a new legislative trend at the state level, documenting multiple instances of a new authoritarianism, viewed by many as strikingly un-American.

It would be difficult to improve on Common Dreams' carefully-assembled list of new oppressive laws in the works in the US, so we will simply reproduce it here:

The Arizona State Senate in February voted to expand racketeering laws to allow police to arrest anyone involved in a protest and seize their assets, treating demonstrators like organized criminals.

Portland, Oregon, activists organizing against police killings of Black men, white nationalist politicians, and the countless systems of racism throughout our local, state, and federal governments are now considered "domestic terrorists" by Department of Homeland Security.

In January, North Dakota Republicans proposed legislation to legalize running over protesters if they are blocking roadways. (The legislation failed, for now.)

Missouri lawmakers want to make it illegal to wear a robe, mask or disguise (remarkably, a hoodie would count) to a protest.

In Minnesota, following the police shooting death of Philando Castile, protests caused part of a highway to shut down. Then, at the beginning of the state legislative session, Minnesota legislators drafted bills that would punish highway protesters with heavy fines and prison time and would make protesters liable for the policing costs of an entire protest if they individually were convicted of unlawful assembly or public nuisance.

Republicans in Washington state have proposed a plan to reclassify as a felony civil disobedience protests that are deemed "economic terrorism."

Lawmakers in North Carolina want to make it a crime to heckle lawmakers.

In Indiana, conservatives want to allow police to use "any means necessary" to remove activists from a roadway.

Colorado lawmakers are considering a big increase in penalties for environmental protesters. Activists who tamper with oil or gas equipment could be, under the measure, face felony charges and be punished with up to 18 months behind bars and a fine of up to $100,000.

A bill before the Virginia state legislature would dramatically increase punishment for people who "unlawfully" assemble after "having been lawfully warned to disperse." Those who do so could face a year in jail and a $2,500 fine.

And those are only the moves that have been made public.

According to a statement from Kiai and Kaye, "The trend also threatens to jeopardize one of the United States' constitutional pillars: free speech." The UN independent experts have called for moves to stop and reverse the legislative trend.

"From the Black Lives Matter movement, to the environmental and Native American movements in opposition to the Dakota Access oil pipeline, and the Women's Marches, individuals and organizations across society have mobilized in peaceful protests, as it is their right under international human rights law and US law," they said, cited by Common Dreams.

Kiai and Kaye took a specific interest in the use of the terms "unlawful" and "violent," as a means to describe protest methods in the US.

"There can be no such thing in law as a violent protest," they asserted. "There are violent protesters, who should be dealt with individually and appropriately by law enforcement. One person's decision to resort to violence does not strip other protesters of their right to freedom of peaceful assembly. This right is not a collective right; it is held by each of us individually."

"Peaceful assembly," the UN representatives said, "is a fundamental right, not a privilege, and the government has no business imposing a general requirement that people get permission before exercising that right."

The history of democracy in the United States, as well as the burgeoning civil rights movement, has been, in part, defined by the ability to freely assemble, and to speak freely about one's convictions. Legislators must be mindful of their national history, suggested Kiai and Kaye.

"We call on the US authorities, at the federal and state level, to refrain from enacting legislation that would impinge on the exercise of the rights to freedom of peaceful assembly, expression and opinion," they said.

Concurrently, a large-scale nationwide protest is planned for May 1. "A Day Without Immigrants" will bring together millions who are alarmed at the recent upswing in arrests and detentions under the Trump administration of those not born in the US. The protest will also be an opportunity to combine the many ongoing human-rights struggles within the nation, building strength in numbers across the plurality and majority of American citizens who stand for the norms codified under the United States Constitution, according to reports.

Thousands of Americans Turn Holiday Into 'Not My Presidents' Day' Protest