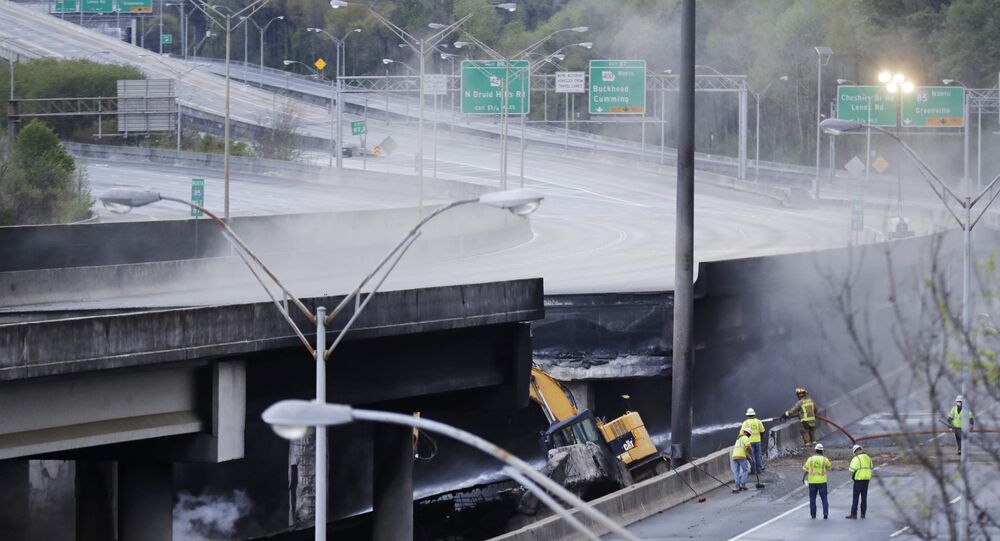 After the partial collapse of Atlanta Interstate 85 on Thursday during a massive fire, the highway is to undergo lengthy and extensive repairs.

The northbound I-85 bridge partially collapsed after it was engulfed in flames, while the southbound bridge was damaged by the fire. Thousands of people were trapped on the road for hours on Thursday in a jam that extended for five miles.

Inspectors said that other sections of the bridge may also require repair or replacement as a result of fire damage. Although a timeframe has yet to be released, Georgia Department of Transportation (GDOT) Commissioner Russell McMurray said in a statement that the process would be "time consuming."

My solution for the I-85 bridge. If you're gonna rebuild it, do it right!! What do you think @Hot_Wheels? #make85fun #hotwheels #85collapse pic.twitter.com/MZVXPKJaf9

"We are as eager to learn the cause of this fire as anyone, which is why we will continue to work closely and in full cooperation with fire investigators to determine exactly how the fire was started," McMurray said.

The fire started in a pile of "construction materials, equipment and supplies" under the interstate. The cause of the fire is still unknown, but Atlanta Mayor Kasim Reed said that both the city and the FBI agree that "there is no evidence that [the fire] is related to terrorism."

It is also unlikely that the combustion was spontaneous, as the equipment storage was "a secured area containing materials such as PVC piping, which is a stable, noncombustible material."

© AP Photo / WSB-TV
In this aerial image made from a video provided by WSB-TV, a large fire that caused an overpass on Interstate 85 to collapse burns in Atlanta, Thursday, March 30, 2017. Witnesses say troopers were telling cars to turn around on the bridge because they were concerned about its integrity. Minutes later, the bridge collapsed. (WSB-TV via AP) MANDATORY CREDIT, ATLANTA TV OUT

Metropolitan Atlanta Rapid Transit Authority (MARTA) has issued a statement of their own. "Due to the recent I-85 collapse, MARTA is providing additional services to accommodate the expected influx of passengers needing to navigate traffic congestion and delays… MARTA continues to work closely with our state and local partners to ensure that residents and visitors can safely reach their destinations," they wrote on their website.

​​GDOT estimates that 220,000 people drive on the destroyed section of the interstate every day. Federal transportation officials have awarded $10 million in emergency funds to aid in repairs.

"I think it's as serious a transportation crisis as we could have," Reed said to reporters Thursday evening.