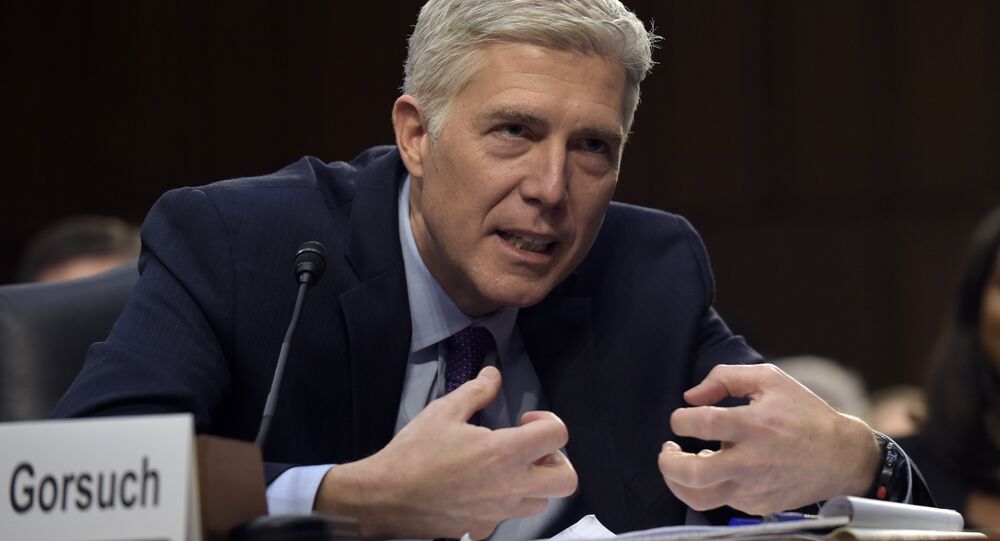 President Trump’s Supreme Court nominee Neil Gorsuch on Tuesday testified before a Senate panel on the second day of his confirmation hearings.

Editorial cartoonist and columnist Ted Rall, author of the book "Trump: A Graphic Biography," referred to Gorsuch as an appointee that "any self-respecting Democrat should vote against."

He believes Democrats should be concerned by the possibility of Gorsuch taking the position, as he is known for possessing a conservative judicial philosophy, borne out in thousands of federal court cases over the past decade.

"He is what they now call a ‘principled conservative,' but by European political standards would be considered a far-right," Rall told Radio Sputnik's Brian Becker during a Loud & Clear broadcast.

"His interpretations of the law and the places that he comes from are far more emotionally based in the politics of the far-right than what is being portrayed even by mainstream liberal-oriented, Democratic party-oriented corporate media in the US."

According to Rall, an "extremist" like Gorsuch who believes that the US Constitution is frozen and unchanging, and who helped defend the CIA's use of "enhanced interrogation techniques," — a.k.a. torture — in the Bush II era, "should not serve" on the US Supreme Court. He also expressed doubt about Gorsuch's "brilliance," often attributed to him by the mainstream media.

"It you are going to be charitable about the interpretation of the word ‘brilliant,' which is true — that is constantly the word that's associated with him, then you could say it takes a brilliant legal mind to defend the indefensible, which is what he was charged with doing."

Rall added that one of the tortures Gorsuch defended was waterboarding, which was banned by the international convention against torture, to which the US is a principal signatory.

"But I guess if he was a little more brilliant he would have convinced more people, and he or [then Attorney General Alberto] Gonzales never really managed even to convince the US Supreme Court at the time that torture was legal."

Known for his well-written opinions and verdicts, Gorsuch is expected to be confirmed to the court, as Republicans control the US Senate. If confirmed, he would restore the nine-seat court's conservative majority.

Is Torture Effective and Can It Be Justified?