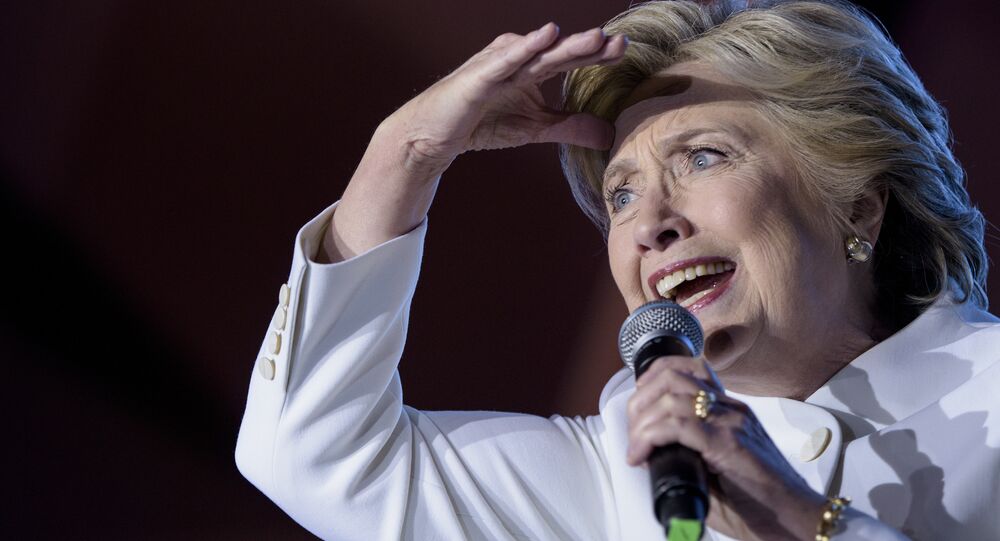 A Fresh Start? What's Behind Hillary Clinton's Intent to 'Come Out of the Woods'

On Friday, former Democrat presidential hopeful Hillary Clinton hinted that she is ready to get back to politics.

© REUTERS / Mike Segar/File Photo
Hillary Trolls President Trump on Twitter, Yet Again
"I am ready to come out of the woods and to help shine a light on what is already happening around kitchen tables, at dinners like this, to help draw strength that will enable everybody to keep going," Clinton said during a St. Patrick’s Day event in Scranton, Pennsylvania.

Talking about her readiness to "come out of the woods," Clinton may be referring to the several times she had been seen hiking through the woods since the election.

Hillary Clinton is just wandering around the woods. You did this, America. https://t.co/ObjtEj3uyQ pic.twitter.com/lGgSJFwg5Q

​Hillary Clinton also said that she would continue her public speeches, including before students at her alma mater, Wellesley College, Massachusetts.

In addition, she plans to publish a collection of essays, including on her defeat in the presidential election and her political standoff with Donald Trump.

© AP Photo / Charlie Neibergall
Hillary Clinton May Run for NYC Mayor, Against de Blasio
Earlier, some American media outlets reported that the Democrats called on Hillary Clinton to return to the political arena, in a bid to take on New York City mayor Bill de Blasio at the November 7 election.

Due to the current crisis in the party, there is no political leader among the Democrats and no one has so far decided to run in the upcoming elections. However, Neera Tanden, a longtime ally of Hillary Clinton, said that she would not run for NYC mayor, nor participate in other electoral campaigns.

Yury Rogulev, director of the Franklin Roosevelt Center for American Studies at Moscow State University, doubted that Hillary Clinton would be able to take an important position.

"On the one hand, mildly speaking, she is not very young. On the other hand, she has had several senior positions, including the post of the State Secretary, the third most important post in the US political system. She was also a senator and a second lady. But as for her future career, it is hard to say anything," Rogulev told RT.

According to the expert, the main problem is that Hillary Clinton does not enjoy wide public support.

© REUTERS / Carlos Barria
Hillary Clinton Backs Protests Against Trump's Entry Ban for Muslims
"Her negative rating was very high. Over 50 percent of people did not want her to become president," he pointed out.

According to Maksim Bratersky, a professor at the Russian Higher School of Economics, Hillary Clinton has not quit politics.

"She is still in the political arena. On the other hand, her defeat in the election was a serious blow and she needed timed to recover and work out future plans. The post-election situation shows that the American society is split. There are only two prominent leaders among the Democrats – Hillary Clinton and Barack Obama," Bratersky said.

He added that if the party will present a new leader to voters it will not be able to run in any important election. But if such a leader emerges Hillary Clinton will move on the backburner.

"Talking about presidential election, it’s all over. She will not do that again," the expert concluded.