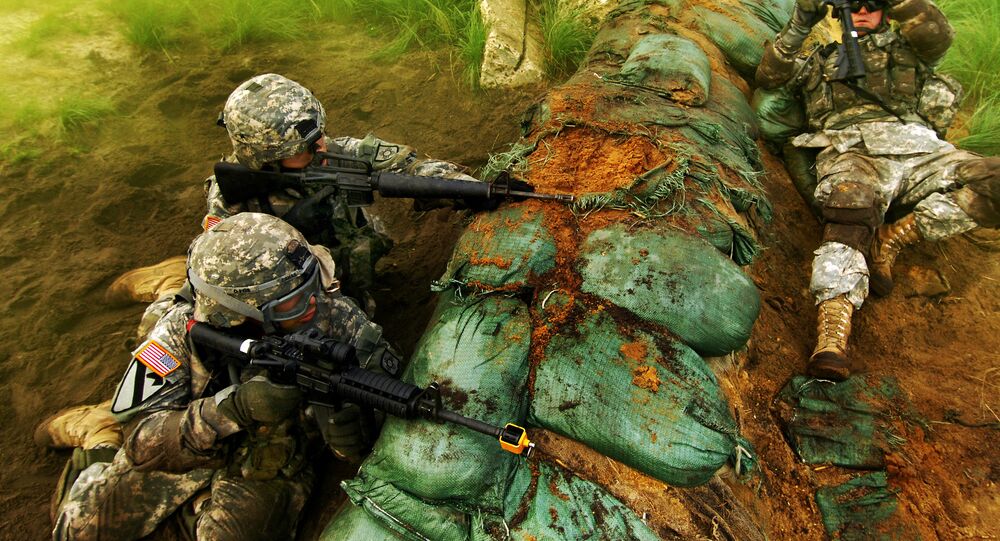 On Thursday, United States President Donald Trump outlined his budget proposal for 2018, presuming a $54 billion increase in military spending and considerable cuts in education, environment protection and human rights activities around the world.

In particular, the US State Department faces a 28 percent cut in financing compared to 2016. Thus, Washington will have to decrease its financial support for loyal organizations and human right movements serving in its interests in many parts of the world.

Experts suggest that Trump’s budget proposal reflects a pragmatic approach to foreign policy. However, they expect a lot of difficulties with regard to the approval of the document in Congress.

© AFP 2021 / HO / ALBARAKA NEWS
Foreign Affairs Committee Chair: US Budget Cuts Will Hurt Counter-Terror Plans
The proposal has already faced harsh criticism from the liberal wing of the US establishment. Numerous US human rights organizations and liberal media outlets have also criticized it.

Congress is expected to formulate budget resolutions by the end of April and finally approve the document in September-October. Despite the fact that the struggle over budget between the Republicans and the Democrats is up ahead, it is already clear that focus will move from promoting soft power to building up national security.

In addition to a $54 billion increase in the US defense budget, a 9 percent increase is planned for the Department of Homeland Security and intelligence agencies. If Congress approves the document US security and defense spending will top $630 billion.

© AFP 2021 / Saul LOEB
Democrats Urge US Senate to Exclude Border Wall Funding From Spending Bill
As for the State Department, the proposed spending cut, for example, will affect such broadcasting institutions as Voice of America and Radio Liberty.

Moreover, Politico reported in February that Trump wanted the State Department and the US Agency for International Development (USAID) to cut their budgets by at least 37 percent. However, the plan was confronted by State Secretary Rex Tillerson. As a result, the White House and the State Department worked out a compromise, including a gradual decrease in spending.

Furthermore, budget cuts will also affect such non-profit organization as the National Endowment for Democracy and Freedom House.

In his presidency, Trump places an emphasis on developing the defense industry, rather than promoting American ideals and values, according to Nikolai Zlobin, a political analyst and director of the Washington-based Center on Global Interests.

The analyst suggested that the activities of the US State Department and its affiliated structures will decrease while US intelligence agencies will gain more power in foreign policy.

"Trump’s foreign policy philosophy rejects [former US President Barack] Obama’s approach. The ideological component will be minimized. The role of the State Department will decrease in the coming years. However, Congress is likely to protest such a scenario. The White House and Congress will have to look for a compromise," Zlobin told the Russian newspaper Izvestia.

© Photo : Pixabay
Military-Industrial Complex is Back: Trump Unveils His Budget Plan
He also noted that Trump is not very much interested in human rights activities and environment protection. As a result, the State Department will decrease financial support for structures and organizations working in those fields.

According to Vladimir Vasiliev, a senior research fellow of the Institute for American and Canadian Studies at the Russian Academy of Sciences, Trump aims for major changes to US foreign policy.

"During the electoral campaign, State Department staff wrote an open letter criticizing Trump. Of course, Trump remembers that. But what is more important is the fact that he is going to change the entire foreign policy, and this is why the role of the State Department will change. Trump is pragmatic and he will not spend money and resources to promote democracy and human rights," Vasiliev suggested.

According to him, the proposed budget cut for the State Department is a signal that "Washington is wrapping its soft power programs," including support for opposition movements, funds and media outlets.