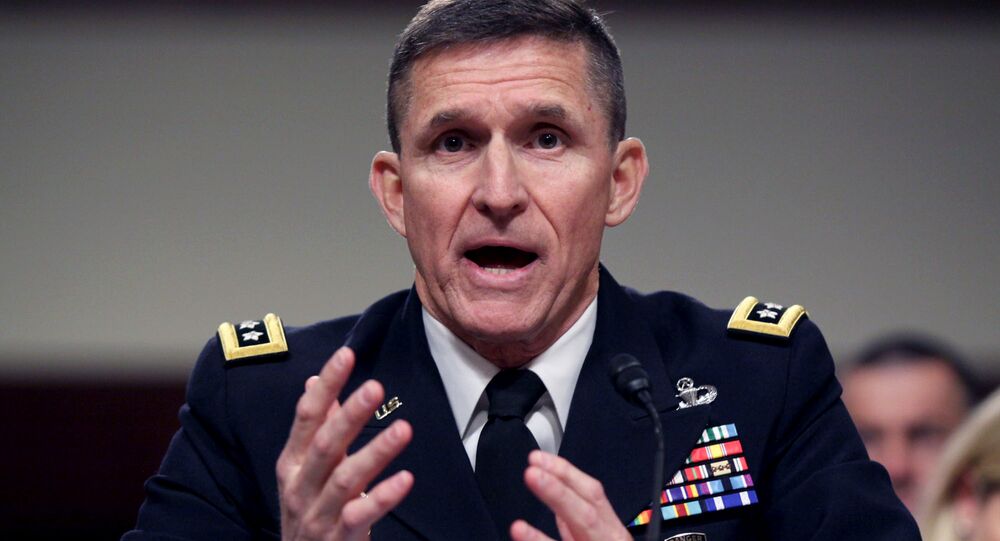 'Crime of the Year': WSJ Smear of Flynn for Chat With Russian Girl Stuns Twitter

The Wall Street Journal has dialed up the paranoia over former National Security Advisor Mike Flynn's so-called 'Russia ties' over his failure to disclose an 'interaction' he had with a Russian-British national at a security conference in 2014. But as social media users, including a Russian senator, point out, WSJ's case is extremely weak.

Over the past week, the US mainstream media seem to have made it their mission to smear retired Leut. Gen. Michael Flynn over his receipt of payment for a speech at a 2015 conference in Moscow organized by Russian broadcaster RT. The same week, US media took another jab at the official over a payment he received from Kaspersky Lab for his participation in an expert forum on cybersecurity in Washington, also in 2015.

© AP Photo / Drew Angerer / GETTY IMAGES NORTH AMERICA
Kaspersky Lab Paid Flynn in 2015 for Taking Part in Cybersecurity Forum in US
Flynn, who resigned from his post as Trump's National Security Adviser last month over his failure to disclose the extent of his (perfectly legal) contacts with Russian officials, sparked a feeding frenzy among anti-Trump media, which soon launched a campaign to destroy Trump with allegations that there was something sinister about his officials' contacts with various Russians.

On Saturday, the Wall Street Journal decided to take another shot at Flynn, 'discovering' that he never reported on a 20-minute exchange he had with Svetlana Lokhova, a Russian-British national and graduate student, at a security conference in the UK in 2014. WSJ criticized his failure to disclose the 'interaction', implying that this was a violation of procedures in the US intelligence community. Flynn was serving as the director of the Defense Intelligence Agency at the time.

Price Floyd, a spokesman for Flynn, called WSJ's aspersions a "false story." "The inference that the contact between Gen. Flynn and a Russian national described in this story should be seen in any light other than incidental contact is simply untrue," he said.

Interestingly, a cursory search for details about the conference in question reveals just how thin the newspaper's 'story' actually is. It turns out that the seminar took place in February 2014, just days after the coup in Kiev, weeks before the Crimean referendum, sanctions and the general crisis in relations between Russia and Western countries. Before the crisis, US officials, including the Clinton family, seemed to have had no qualms in speaking to Russian officials, much less some graduate student.

© REUTERS / Carlos Barria
Flynn's RT Case: What About Hillary Clinton Taking Fees From Foreign Gov'ts?
Furthermore, Ms. Lokhova, the former graduate student at the heart of the latest Flynn 'scandal', is a dual citizen, as WSJ's story itself admits. According to Russian statistics, at least 817,000 Russians have dual citizenship, with millions more living outside Russia who haven't renounced their citizenship. With so many Russians around, perhaps Flynn should have filed a report on every possible Russian he ever came in contact with anywhere, under WSJ's logic.

Social media users couldn't help but comment on this grasping at straws to try to smear Flynn, and by association Russia. This included Russian Senator Alexei Pushkov, who tweeted that "Flynn is being accused of 'contact' (!) with a Russian citizen; he talked to her at some reception." This, the lawmaker suggested, is simply a whole "new level of paranoia" for the US establishment.

"In the US, Flynn, who resigned earlier, is being accused of 'contact' (!) with a Russian citizen; he talked to her at some reception. A new level of paranoia."

Other Twitter users also jumped in to beat up on the WSJ for the joke of a story.

Nina Kouprianova, an independent geopolitical analyst, sarcastically added that unfortunately, the Flynn story was not something out of The Onion (a satirical newspaper filled with fake stories).

Not The Onion: Flynn's latest reported sin is talking to a Russian grad student at a security conference. https://t.co/3AsvrKe3hB pic.twitter.com/FssJY3exW8

Others, even those who said they are not fans of President Trump and Flynn, pointed out the story's absurdity.

"WSJ: Flynn hid a 'public conversation' he had with Russian student from the Pentagon…How can you hide a PUBLIC conversation!?"

"Furthermore, Flynn failed to report that he helped an old lady cross the street."

Others were more serious, pointing to the implications the WSJ's story has for the state of the US media environment:

"Well, if Flynn simply had some tea with a [Russian-] British graduate student, we are in a cold media war."