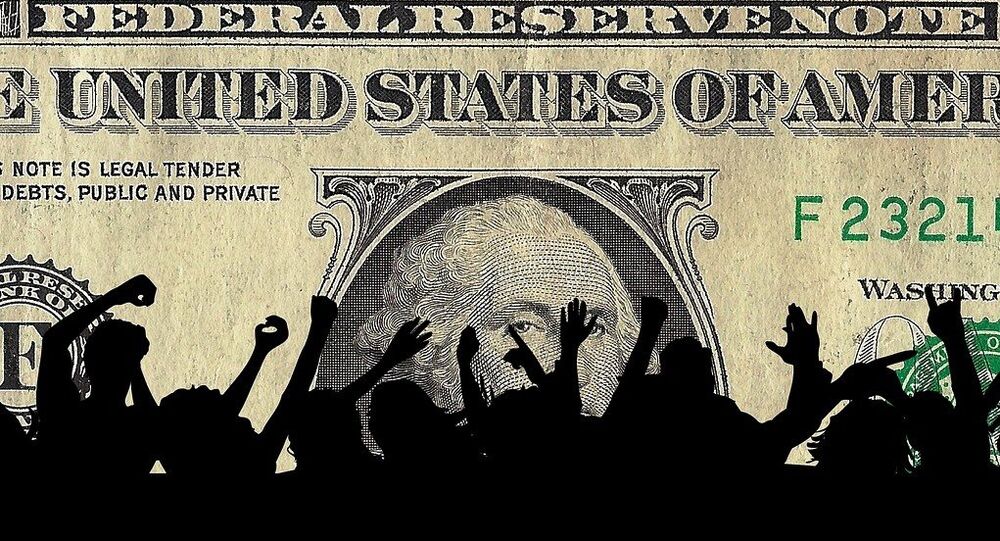 US President Donald Trump aims to cut spending on most federal agencies and programs and discharge many federal employees, while boosting infrastructure, defense and security spending, in a textbook pivot to military-industrial complex-driven economic expansion.

© AP Photo / Alex Brandon
Trump's Bill to Replace Obamacare Will Reduce US Deficit by $337 Billion - CBO
Kristian Rouz – US President Donald Trump has proposed his vision of the new US budget for 2018. It's aimed at stimulating and deregulating the economy via massive funding cuts for bloated government bureaucracy; military and infrastructure-related spending, however, will increase. The new fiscal year starts in October, and there is still some time for the plan to be reviewed in Congress, where some Republicans may want to amend certain provisions of the new budget, while most Democrats will likely be opposed to any Trump proposals whatsoever.

Trump will deliver his budget proposal to Congress on Thursday, and almost every federal agency is facing changes in their financing, according to the new plan. Defense and security spending will increase, while many social programs and spending on international causes will be rolled back.

© CC0
Troubled Liftoff: Improvements in US Economy Marred by Sector Discrepancies
The new White House administration is apparently trying to boost the work efficiency of these governmental agencies, and make their spending more cost-efficient as well. Meanwhile, Homeland Security, Defense, Nuclear Administration and Housing and Urban Development will get 6-13% more money.

All of this means that Trump, as some suggested earlier, is a President who represents the US military-industrial complex. His urge to restore and renovate the US manufacturing and infrastructure sectors pretty much correlates with the budget proposals, as greater military spending is a time-tested way to improve the situation in domestic manufacturing.

"You see reductions in many agencies as he tries to shrink the role of government, drive efficiencies, go after waste, duplicative programs," Mick Mulvaney of the Office of Management and Budget said. "If he said it in the campaign, it's in the budget."

Some left-leaning Trump opponents have criticized the President's eco-unfriendly stance on many issues. However, dramatic decreases in environmental regulations are merely a reflection of his broader agenda of deregulating the economy, as in case with oil and pipelines, for example. There is currently little doubt that both the Keystone XL and Dakota Access pipelines will be commissioned during Trump's current term.

"To keep Americans safe, we have made the tough choices that have been put off for too long," Trump said. "But we have also made the necessary investments that are long overdue."

Transportation is among the biggest winners: Trump has proposed a 13.3pc spending increase in a bid to improve America's infrastructure. Increased spending on defense (by 10pc) and security (by 7.3pc) has deemed more moderate than one would have expected, given the party's bellicose history. Therefore, Trump's support of the military is purely economy-motivated: a true "war hawk" would have likely put the military before infrastructure.

The new budget will also include major federal employee layoffs as job-creation must be in the competitive private sector, rather than government agencies, according to Trump.

"You can't drain the swamp and leave all the people in it," Mulvaney remarked.

The Department of Education, however, will get some $1.4 bln in funding for the new school choice programs, something that might placate Democrats, who recently scolded Trump for his Education Secretary choice. The teacher's unions, which spent tens of millions lobbying for the Democrats, are vocally against these voucher programs that would shift funding from public to private schools.

© REUTERS / Jim Lo Scalzo/Pool
Trump Address to Congress Pushes US Economic Confidence to Nine-Year High
US involvement in foreign affairs will be dramatically reduced, as US funding for international development institutions like the World Bank and the International Monetary Fund is facing cuts as well.

All that being said, Trump's massive fiscal stimulus, that will also include tax cuts and specifics regarding infrastructure spending, is yet to be announced, but the budget proposals outline the new administration's general view of the new era of American isolationism. The final version of the new budget might be less radical in terms of spending cuts, as congressional Republicans will have their word and edits.

The broader direction, however, is still in line with Trump's campaign promises, shifting the source of growth from frantic redistribution to wealth generation, powered by ambitious defense and infrastructure projects.