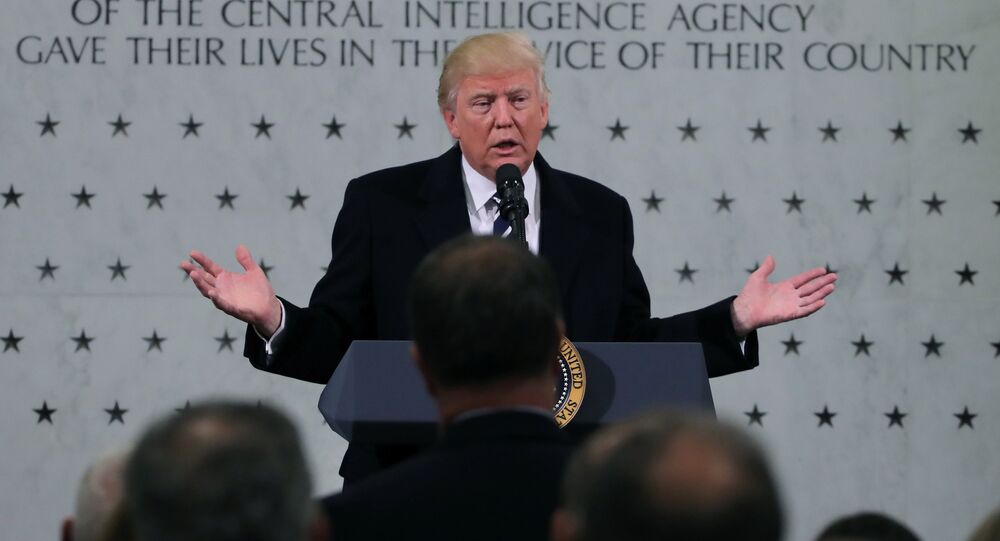 WikiLeaks has released a vast archive of data detailing the hacking and eavesdropping tools used by the Central Intelligence Agency. Speaking to Radio Sputnik, Dr. Binoy Kampmark, a senior lecturer at RMIT University Melbourne, said that all signs point to the leak being the work of insiders trying to send an important message to President Trump.

On Wednesday, WikiLeaks published over 8,700 classified CIA files – the first part of its so-called Vault 7 release, which has already become the largest-ever release of confidential documents on the US foreign intelligence agency.

© AP Photo / Sang Tan
Time Is Running Out for WikiLeaks Founder Julian Assange in Ecuadorian Embassy
According to the whistleblowing website, the leak's revelations, which include information that the agency creates homebrew viruses, runs a hacker base in the US consulate in Frankfurt, can spy on people through smart tvs, and is working on hacking into modern cars to carry out untraceable assassinations, were just 1% of the information WikiLeaks has in its possession.

Officials at both the CIA and the FBI have each indicated that they are conducting inquiries into the source of the leaks.

Speaking to Radio Sputnik, Professor Binoy Kampmark, an expert on US politics and international affairs, said that he felt it pretty obvious that the information was leaked by someone inside the CIA itself, and for an important reason.

"In the intelligence community in the United States, there are certain disgruntled individuals [concerned] about the way operations are being run, and it's obvious that material has come out that was felt by some of these individuals needed to be discussed," Kampmark explained.

© Sputnik / ALEXEY DRUZHININ
Russia Takes Into Account WikiLeaks Report of CIA Attempts to Wiretap Putin
"The point made by WikiLeaks in one of its dispatches [explaining] the files being disclosed was that the CIA has essentially lost control with certain members of its community over the agency's hacking capabilities." The leak, the professor noted, "seems to be the result of that."

The leak's revelations, he added, indicate very clearly that "that bloated intelligence communities seem to be plaguing us." In other words, "rather than focusing and discriminating on targets, they seem to be losing the plot in terms of identifying targets of value," going for the mass accumulation of data using technology instead of targeting people who may actually pose a threat to US security.

On Thursday, Vice President Mike Pence described the Vault 7 leak as "a very serious offense," and declared that authorities would use the "full force of the law" in going after those behind it. White House press secretary Sean Spicer indicated that the leaks were outrageous, and undermined US security and well-being. Trump himself however has remained silent on the issue so far.

Asked what kind of message the Trump administration can be expected to take from the leak, Professor Kampmark suggested that it help give the White House the necessary push to refocus the CIA. "I think it comes down to a fundamental issue –something also said by former intelligence officers who are familiar with this: the point is to trim operations to focus specifically on value targets – to start identifying ways where this can be done."

© CC0
Can of Worms: CIA Malware for Hacking Phones and TV's 'Will Be Used by Hackers'
In other words, the academic noted that "in a broader sense, disclosures like this [can be treated] as a kind of trimming exercise – or an incentive to be more discriminating, more aware, more discerning about targets." That, he stressed, would serve to reduce the impression that US intelligence agencies, whether it be the CIA or the NSA, are aiming their resources at those who seek to harm national security, not at ordinary people.

The CIA, according to Kampmark, will certainly be hoping that the public, and the White House, simply accept the leaks as business as usual – as something that was formally kept a secret, but that everyone already got the sense was happening.

Unfortunately for the agency, the professor noted that "we have a very interesting situation with the president of the United States, who is suspicious of the CIA – who sees conspiracies, not all of which are necessarily off the mark, and who has a very mixed relationship with the intelligence community. One of the things that is of course fundamental in understanding is that the president of the United States is meant to control the intelligence community, not the other way around."

Accordingly, Kampmark noted, "what will be interesting will be to see is the impetus [the leak] gives –whether Trump officials or Mr. Trump himself act on this, or whether [the CIA] will hope that this somehow goes away, because it doesn't look good in that regard. We have the White House and the intelligence community seemingly at odds already, so how this plays out will be a very interesting point as matters develop, not just over the next few months, but for the next few years."

FBI Director Defiant: 'There's No Such Thing as Absolute Privacy in America'