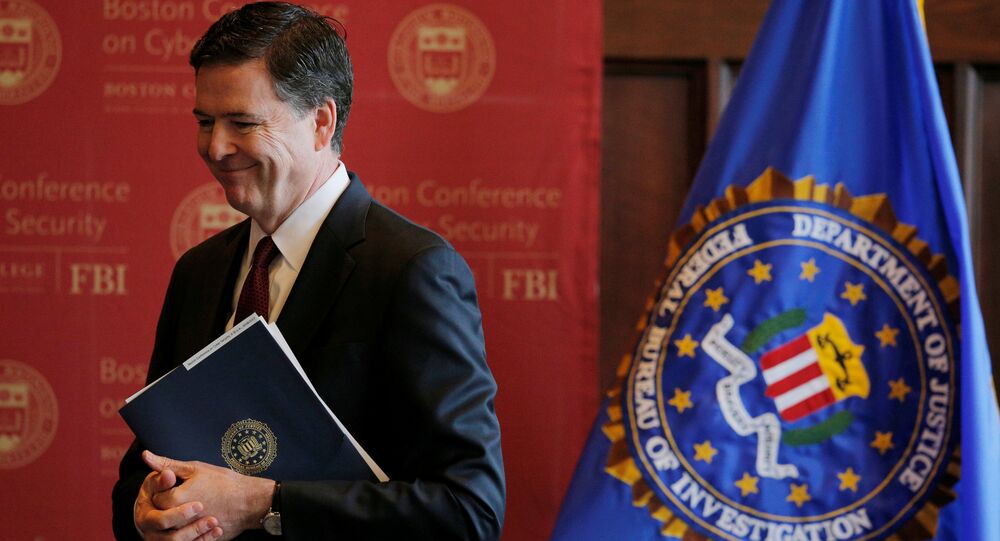 FBI Director Defiant: 'There's No Such Thing as Absolute Privacy in America'

Beleaguered FBI Director James Comey has given a defiant speech to a cybersecurity conference in Boston, describing the US as a land where "there is no such thing as absolute privacy." His stance has dismayed those already deeply concerned by recent revelations of CIA tools used to hack personal electronics.

FBI Director James Comey has given a keynote speech at a prestgious cybersecurty conference in Boston, in which he warned US citizens that they should not expect "absolute privacy" in their lives.

"Even our communications with our spouses, with our clergy members, with our attorneys are not absolutely private in America," Comey said.

Despite widespread concerns over whether individual privacy rights are being infringed upon by the US Government, Comey went further and argued in favor of weakening encryption technology to allow the FBI greater access to consumer devices.

His stance as the head of one of the US' most important intelligence agencies has bewildered many Americans.

The intelligence community has long struggled with an uneasy relationship between themselves and large numbers of the public they are sworn to protect, but who feel the opposite: that the state is a threat to their privacy.

And now, US intelligence has taken its second powerhouse hit this week in their PR battle to convince Americans that security comes at a cost. Namely, that relinquishing some aspects of privacy is deemed necessary to enable the capacity to tackle the myriad of cyber and terror threats across the globe.

They detail CIA tools used to hack private electronic devices, such as Samsung TVs, to spy on individuals.

I don't regret keeping tape over my computer camera but it's going to be weird when I put earmuffs over the rest of our home electronics.

The breadth of Vault 7 is enormous. It's the largest ever leak involving the CIA and has been compared in scale and significance to the Edward Snowden leaks of NSA files in 2013.

While the fallout over these leaks continues, Comey's input is being seen by some as defiant.

"The cyberthreats we face are enormous. I don't know if we can stay ahead of them. And I think to say otherwise would be hubris," Director Comey said.

"We need to ensure that cybersecurity is a priority for every enterprise in the United States at all levels. We need to get better and faster at sharing information in the appropriate ways.

"We need to make sure we have the right people on board to help fight that threat, and we need to build trust between the government and the private sector."

The message from Comey to the American public appears to be that despite privacy concerns, it's business as usual, and that targeted surveillance on mass remains a legitimate policy.

Dir. Comey: “Cyber threats are too fast, too big, & too widespread for any of us to address them alone." https://t.co/pfirautT0j pic.twitter.com/0KvBWbz5YX

In his keynote speech, Comey acknowledged that between October and December 2016 alone, his agency attempted to access 2,800 devices, but was unsuccessful with 1,200 machines.

Citing the example, Director Comey pressed for further rights to be afforded to the FBI, to enable them to unlock more technology as part of their investigations.

His confidence extended further to his job security, saying he intends to serve the entirety of his ten year term.

"You're stuck with me for another six years," Comey smiled.

Trump 'Very Concerned' About Confidential Information Leaks on Any Level