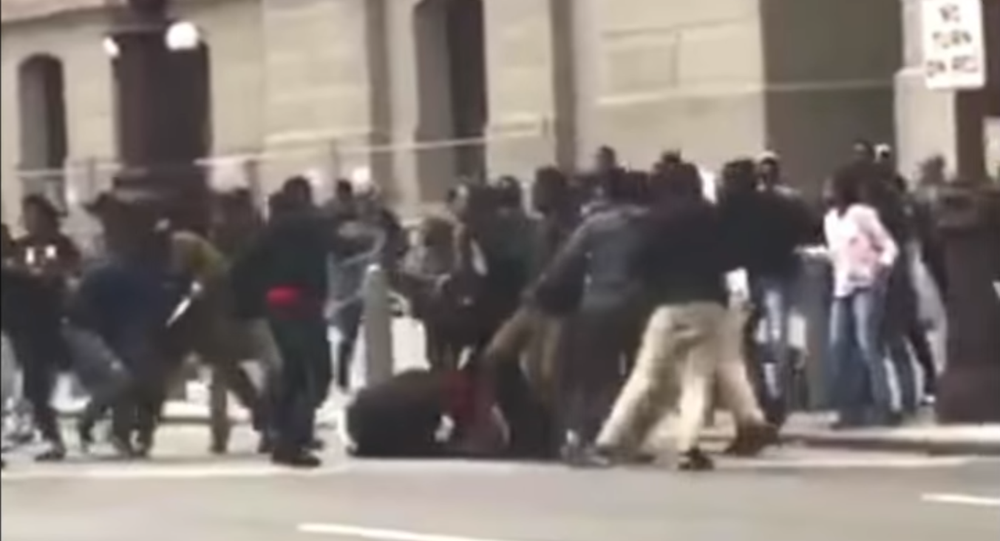 Over 20 arrests were made in Philadelphia Monday evening after a flash mob of 100 teenagers devolved into a massive brawl.

Police Commissioner Richard Ross said that the teens gathered at around 5:30 p.m. and began to fight, and run in and out of traffic. They attacked one another, as well as passersby, he said, leading to 20 arrests for disorderly conduct and a several more for assault.

smh I have seen this happen so many times.. pic.twitter.com/f7yFEqQhN8

"They [the victims] were actually beaten, maced and claim to have even been tased," he said. "We know they were assaulted for sure. We had four people, we do not know if charges will be approved on those four. So we're trying to wait to see, but the whole thing is just idiotic."

"I don't know why you would want to come down to Center City and act that way,"the commissioner said. "Just to be clear, [I'm] not indicting everyone that came, but nonetheless, enough of these young people came down there and wreaked havoc."

Philadelphia local Kenneth Ensigm witnessed the violence from inside of his truck. "All of a sudden I looked up and saw what looked like 200 teens running from the shops at Liberty Place area," said Ensigm. "After the initial rush of people I started recording with my iPhone. The teens started dispersing as the police followed them on bicycles. I saw two individuals jumping on top of a parked taxi car at the corner of Ludlow and 17th Street. As the police came closer to the two individuals they jumped off the car and ran."

Ross said he believes that the riot was planned by social media, although the motive is unknown. He lamented that police had to waste time on managing out-of-control teens. "We do have other things to do," he said. "We have a whole host of other responsibilities, and devoting resources to something that really doesn't have to be is ridiculous."

During the 2016 Christmas season, a similar incident played out in the City of Brotherly Love, when some 400 teens clashed with police outside of a Philadelphia-area mall. About 30 managed to slip through the barricade and caused chaos in a food court, leading to a lockdown and four arrests.

A November 2016 flash mob led to six injuries and two arrests. An October 2016 incident saw seven assaults and four arrests. All of the incidents were the work of juveniles.

Ross called on parents and communities to prevent youth from taking part in violent events such as these, and for other residents to be wary as the weather gets warmer.

In Philadelphia Trump Greeted By Protesters At GOP Retreat