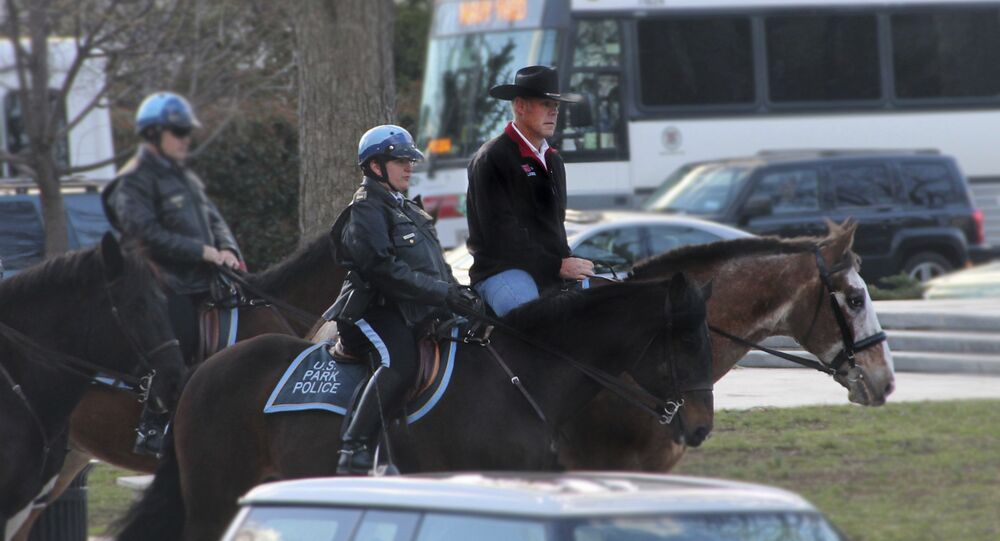 US Interior Secretary Zinke Starts His Tenure In the Saddle (PHOTOS)

New US Interior Secretary Ryan Zinke certainly chose an extravagant way to start his first day on the job as he rode to the office on horseback.

The new Interior Secretary arrived to work wearing a cowboy hat and riding an Irish sport horse named Tonto, accompanied by a security detail of mounted US Park Police officers.

© REUTERS / Tami Heilemann/Department of Interior
New Interior Secretary Ryan Zinke (2nd from R) rides on horseback with a U.S. Park Police horse mounted unit while reporting for his first day of work at the Interior Department in Washington, DC. March 2, 2017

After riding several blocks to the Interior Department from the National Park Service stables located in the National Mall, Zinke was greeted by 350 department employees and former acting Interior secretary Jack Haugrud.

BSEE is pleased to welcome the new Department of the Interior Secretary Ryan Zinke. "Lets get to work!" pic.twitter.com/520TMPxslr

​As Zinke tweeted later, he was "humbled by the warm welcome."

Humbled by the warm welcome at @Interior this morning pic.twitter.com/1zCvKc0CPL

​The US Interior Department responsible for the management and conservation of most federal land and natural resources, and the administration of programs relating to Native American tribes. The department has approximately 70,000 employees stationed at 2,400 locations.

My deepest appreciation to Lance Fisher (Northern Cheyenne) for the honor song at my arrival to @Interior #firstdayonthejob @USIndianAffairs pic.twitter.com/OXuHCIjJw2

Ryan Zinke, 55, was confirmed as the US Interior Secretary by a 68-31 Senate vote on Wednesday, March 1. A former Navy SEAL, Zinke served two terms in the legislature of his home state of Montana and was elected as the state’s at-large representative in the House in 2014.

Humbled by the warm welcome at @Interior this morning pic.twitter.com/1zCvKc0CPL