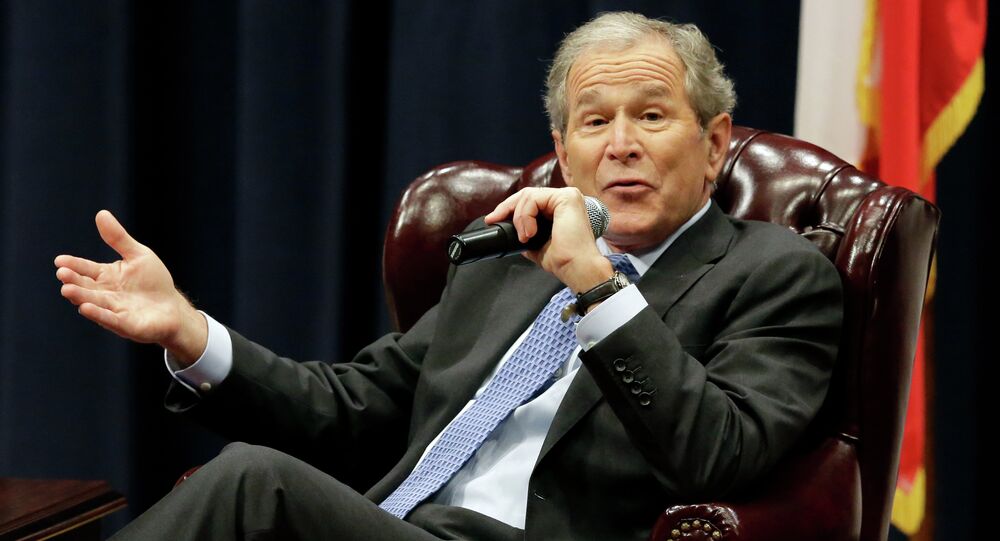 In a recent interview, former US President George W. Bush described the current political climate in Washington as “pretty ugly” and criticized current US President Donald Trump for engaging in “racism and name-calling.”

Cindy Sheehan, legendary anti-war activist and journalist currently hosting the podcast Cindy Sheehan's Soapbox, told Radio Sputnik's Brian Becker that she is exasperated by a series of articles favorable to George W. Bush that followed soon after the remarks, especially those from outlets which generally align with the liberal wing of the ruling elite.

"It is really ridiculous and crazy to see that anybody would listen to anything he had to say, and then treat him as if he is some kind of wise elder statesman, instead of a war criminal responsible for millions of deaths, injuries, a refugee crisis, and a crisis still in Iraq to this day," she said during a Loud & Clear broadcast.

Sheehan pointed out that the main reason why Bush, busy settling into his post-White House life as a painter, is in the news is because he is promoting his first art book, "Portraits of Courage: A Commander in Chief's Tribute to America's Warriors."

​Sheehan, who herself is a victim of the Iraq war, as her son was killed there, said that for anyone to support Bush is "disgusting," as it was the policies of the administration of the former president that got these people who are displayed in his book wounded, as well as killing thousands more, and forcing millions of refugees to flee their war-torn homes.

© REUTERS / Yuri Gripas
Trump on US Attorney General's Case: 'Total Witch Hunt'
"Why would anybody who was wounded terribly in this so-called "War on terror"… agree to pose for this criminal?" she questioned.

According to Sheehan, if Bush and his cabinet are not going to be prosecuted for numerous war crimes, at the very least people should not support the ex-president's books or pay unthinkable fees for his rambling speeches.

"Instead of giving these war criminals any credit or any airtime or any entries in the newspapers, they really should be shunned from society," she said.

"It's not like we oppose George Bush because he squeezes the toothpaste from the middle of the tube. We oppose him because he is a war criminal; and if the United States wasn't so militarily powerful, the Bush regime would've been tried for war crimes and crimes against humanity."

Sheehan added that the "so-called" left wing should not be supporting Bush, or "elevating him to any kind of status," just because he swims along with the current of popular opinion in mildly criticizing Trump.

Sheehan’s son, US Army Specialist Casey, served in the First Cavalry Division and was killed in action on April 4, 2004. Sheehan was abandoned by the US Democratic Party when she publicly and constantly opposed the war in Iraq.