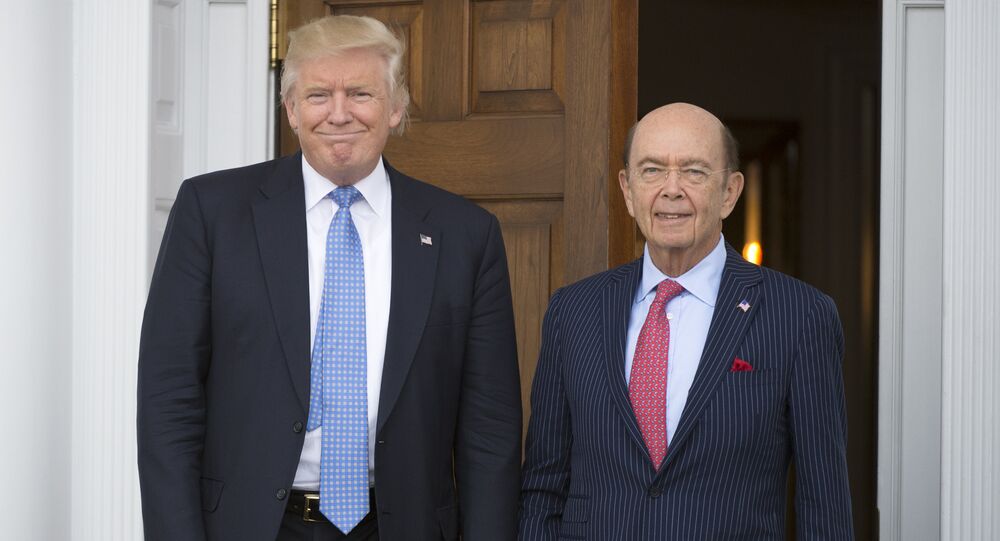 'No Political Experience': Why Wilbur Ross Became US Secretary of Commerce

The appointment of billionaire Wilbur Ross to the post of US Secretary of Commerce is fully in line with the new US Administration's policy, Russian political analyst Alexey Zudin told Sputnik.

© AFP 2020 / Eduardo Munoz Alvarez
The Trump Team's First Loss: Who Was Behind Flynn's Resignation
In an interview with Sputnik, Russian political analyst Alexey Zudin described billionaire Wilbur Ross's appointment to the post of US Secretary of Commerce as a move which is in sync with the new US Administration's policy.

The US Senate confirmed Ross's nomination in a 72-27 vote on Monday night. During a Senate confirmation hearing in January, Ross stated that Trump's administration will focus on ending China's unfair trade practices and monitor those of other US partners.

Ross harshly criticized Chinese steel producers, accusing them of 'dumping' steel onto the global market in order to flush out international competitors. He emphasized that if certain counties do not comply with existing trade rules, they should be punished.

Ross pledged to push the US partners to practice fair trade in a more balanced manner than had been permitted in the past.

The 79-year-old is widely known as a specialist in the restructuring of bankrupt companies. He has a personal fortune of about 2.5 billion dollars, according to Forbes magazine.

In the 1990s, Ross advised the Clinton Administration on issues of US-Russian trade and helped manage the US-Russia Investment Fund TUSRIF.

Commenting on this, Alexey Zudin told Sputnik that Ross's appointment further adds to the already emerging trend in the formation of Trump's Administration.

"The new US Administration has already been nicknamed 'the cabinet of billionaires and generals'. And most of appointments, including the one that has just taken place, confirm this nickname," Zudin said.

According to him, the selection of Cabinet members can be linked with the personality of President Donald Trump.

"Most members of Trump's administration have no political experience. In general, the very fact that the new Administration includes generals and billionaires is a highly illustrative thing," Zudn added.

© AP Photo / Evan Vucci
Meet Steve Bannon, One of the Most Influential Members of the Trump Team
The selection process goes beyond Trump favoring his well-heeled peers, according to Zudin.

From the very beginning, the political analyst said, Trump was an unusual presidential candidate who won in spite of the political establishment of both US political parties — the Democrats and the Republicans.

"This is why there are only few representatives of the 'political elite' in Trump's team. He deliberately relies on those people who have no political experience, but who have expertise in their field related to their former activity and who have certain personal traits. And it is of paramount importance to Trump," Zudin pointed out.