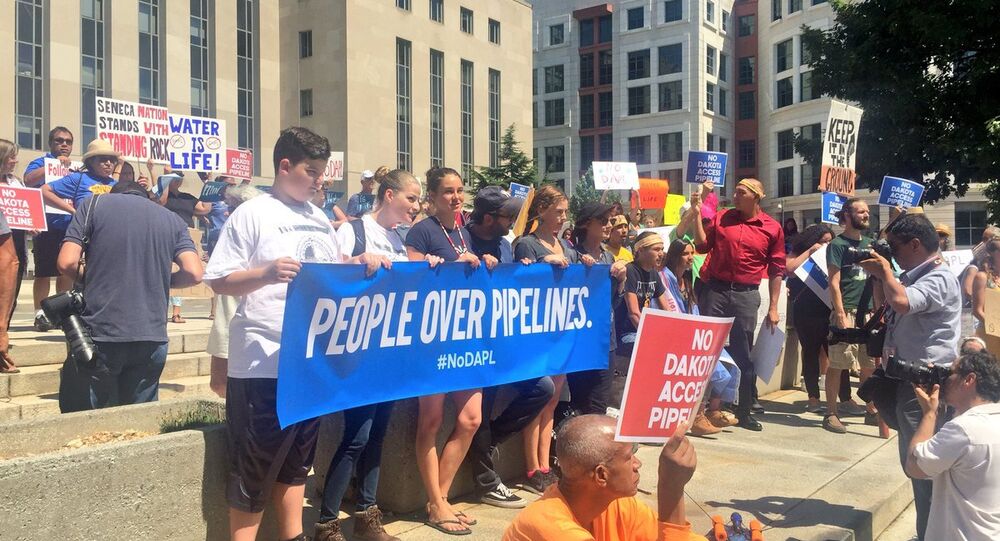 A US judge is hoping to make a decision by March 7 on whether the Army Corps of Engineers must withdraw an easement on the construction of the hotly-disputed Dakota Access Pipeline.

"The sanctity of these waters is a central tenet of their religion, and the placement of the pipeline itself, apart from any rupture and oil spill, is a desecration of these waters," attorney Nicole Ducheneaux, representing the Cheyenne River Sioux, wrote in court documents.

Immediately following the Army Corps of Engineers issuing the easement, construction began under Lake Oahe to finish the final 1.5-mile section of the pipeline.

The construction continued after Judge James Boasberg refused to issue a restraining order halting the work. The judge ordered that if the company building the pipeline, Energy Transfer Partners (ETP), believes that the pipeline will be completed before his ruling however, they must give him 48 hours notice to hand over his decision before oil can begin pouring through.

"The estimate is 60 days to complete the drill and another 23 days to fill the line to Patoka," ETP spokeswoman Vicki Granado told the Associated Press earlier this month.

On Tuesday, Boasberg questioned how the water could be harmed in the event of a leak, as the pipeline is under the lake.

© AFP 2021 / Robyn BECK
Governor Orders Evacuation of Dakota Access Pipeline Protest Camp
The tribe pointed out that even if the pipeline does not leak, it will spiritually degrade the river due to its presence, preventing tribes from carrying out religious ceremonies in the area.

Protests have been consistent at the construction site since April 2016, where thousands of activists joined the tribe.

“We will continue to fight against an administration that seeks to dismiss not only our treaty rights and status as sovereign nations, but the safe drinking water of millions of Americans,” Dave Archambault, tribal chairman, said in a statement at the time that the easement was granted.

The pipeline is intended to transport nearly half-a-million barrels of oil per day under a large lake, across the Missouri River, and through other sensitive ecological habitats. Opponents observe that a leak would be an ecological catastrophe for the water supply of millions of people.

One of President Trump’s early actions after taking office was issuing an executive order making way for the previously shut down Keystone XL and Dakota Access Pipelines to be completed, effectively ending legal challenges put in place by the Obama administration.