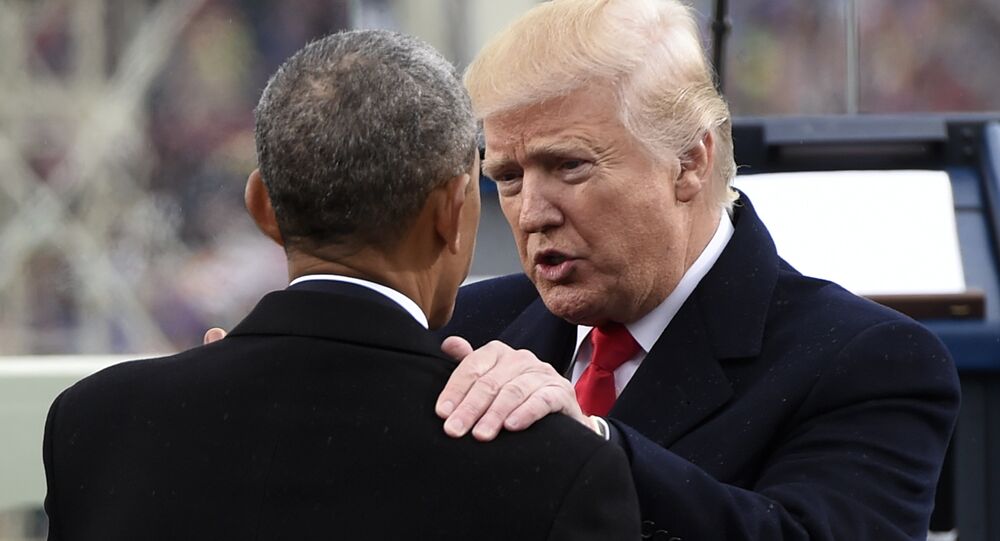 Trump Believes Obama Behind Leaks About Current US Administration

US President Donald Trump said that Barack Obama is behind the mass protests, as well as media leaks about the current US administration.

© Flickr / Thomas Hawk
US Justice Dept. Ends Obama Guidance to Reduce Federal Use of Private Prisons
MOSCOW (Sputnik) – US President Donald said in an interview with the Fox News broadcaster that he is positive that Former US President Barack Obama and "his people" are behind mass protests against the current US administration and the recent media leaks.

"I think that President Obama is behind it because his people are certainly behind it. And some of the leaks possibly come from that group, you know, some of the leaks, which are really serious, because they are very bad in terms of national security. But I also understand that is politics. In terms of him being behind things, that's politics. And it will probably continue," Trump said.

Trump says Obama is "behind" the protests at GOP town halls and leaks coming from the White House pic.twitter.com/HAPhHIEtzU

Since Trump took office on January 20, the US media continue reporting, citing anonymous White House sources, that the administration is in a state of chaos and that presidential campaign staff and White House advisers have had contacts with Russian intelligence services.

Such leaks led to the resignation of Michael Flynn from his post as National Security Adviser earlier in the month. Shortly before his departure, media reported that he had misled Trump administration officials on the extent of his conversations with the Russian ambassador to the United States.

Russian officials have called the US allegations absurd and maintained that Moscow had no role in the 2016 election and has no desire or intent to interfere in US politics.