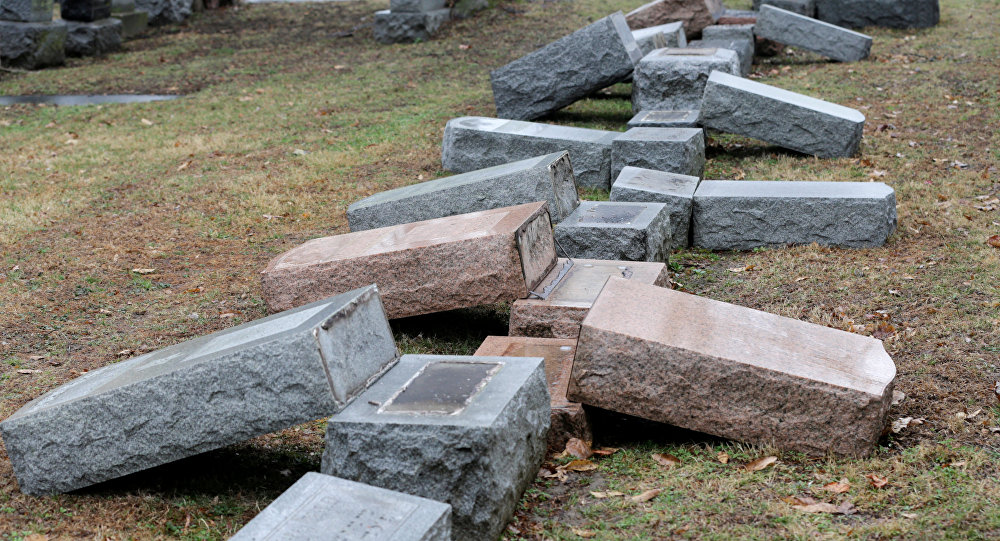 Bomb Threats and Vandals: Business as Usual, or Rise of Anti-Semitism in the US?

Another Jewish cemetery has been vandalized in the US, where a streak of crimes against cemeteries and bomb threats at Jewish community centers shows no sign of ending.

The latest incident occurred at the Mt. Carmel Cemetery Philadelphia, where dozens of headstones were found overturned or otherwise damaged February 26. The damage is widespread and may be found to affect 100 graves or more, the local ABC station reported. Philadelphia police have confirmed that the damage was deliberate vandalism.

The damage was spotted by a man visiting his father's grave in the cemetery.

"It's just very disheartening that such a thing would take place," Aaron Mallin told 6ABC. "I'm hoping it was maybe just some drunk kids. But the fact that there's so many it leads one to think it could have been targeted."

People around the country have the same question: is it just drunk kids, or something worse? Last week, nearly 200 graves were damaged at the 124-year-old Chesed Shel Emeth Cemetery near St. Louis, Missouri.

"You hope it's not a resurgence of something, of anti-Semitism, but I don't know," Herschel Price, 87, who lives in the state, told the New York Times.

Vice President Mike Pence dropped by the cemetery February 24, where he addressed the roughly 1,000 volunteers who had shown up to help with the cleanup.

"There is no place in America for hatred or acts of prejudice or violence or anti-Semitism," Pence said, according to USA Today. "I must tell you, the people of Missouri are inspiring the nation by your love and care for this place, the Jewish community, and I want to thank you for that inspiration."

That act of vandalism has generated light as well as darkness: A Muslim-American group helped raise more than $130,000 — and more than $113,000 in a single day — to repair the cemetery. The donation page was started by Linda Sarsour and Tarek El-Messidi, who also founded CelebrateMercy, a nonprofit that teaches about Islam.

'Our Worst Fears Realized': Anti-Semitic Crimes in US Are Rising

"We just want to send a message that whatever haters and extremists try to destroy, we will rebuild," El-Messidi, 36, told Time Magazine. "Seeing this happen was just disgusting. It shows that when you put all the politics aside, we share humanity together. We want everyone to live in peace and we want everyone to rest in peace."

It's not only cemeteries that have been targeted. More than 50 Jewish community centers have received bomb threats since the start of the year, according to the JCC Association of North America, some of them more than once. Eleven threats were made on a single day, February 20. A neo-Nazi rally was announced, but not held, in a small town in Montana.

Though no one has been injured in any of the cemetery attacks or the dozens of bomb threats made to community centers, the sheer volume of incidents is unsettling. And connections can't help but be drawn to the new administration, which has among its key figures several individuals who have been accused of anti-Semitism and bigotry more than once in their careers. (Also among them is Jared Kushner, the president's son-in-law and close adviser, and an Orthodox Jew.) The Ku Klux Klan essentially endorsed now-President Donald Trump in its official newspaper, as did noted bigots like former Klan leader — and former Louisiana state representative — David Duke, not to mention the new faces of the alt-right, who like to joke around by making Hitler salutes.

"We've never had this level of anti-Semitism — from different places on the ground, on your phone, literally over the phone — come at a time when hate groups and white supremacists, in particular, felt they had a champion in the highest office," Oren Segal, director of the Anti-Defamation League's Center on Extremism, told the New York Times.

US President Donald Trump was slow at first to condemn the series of attacks, but last week addressed the issue, saying, ""The anti-Semitic threats targeting our Jewish community and community centers are horrible, and are painful, and a very sad reminder of the work that still must be done to root out hate and prejudice and evil."

Some voices point out that there's not much evidence for a Trump-triggered wave of anti-Semitism, but rather for a steady and perhaps growing trickle that had been ignored. "As bad as 2017 has been for anti-Semitic incidents, 2016 wasn't great, either," an opinion piece in the February 19 Chicago Tribune notes. "Nor was 2015, when the Anti-Defamation League reported 90 anti-Semitic incidents on campuses, twice as many as the year before — a slow drip that has continued into this school year."

With much more noise than action to the recent string of false alarms and property damage, it's hard to say, yet, how serious a cultural problem they indicate, especially as a study published by the Pew Research Center in the middle of them month found that Jews elicit the "warmest" feelings of any religious group among Americans — and that those feelings are warmer than they were two years ago. (Muslims, perhaps not surprisingly, got the coolest response.)

Still, clearly some hateful people are feeling emboldened. What they really want and how far they'll go remains to be seen.