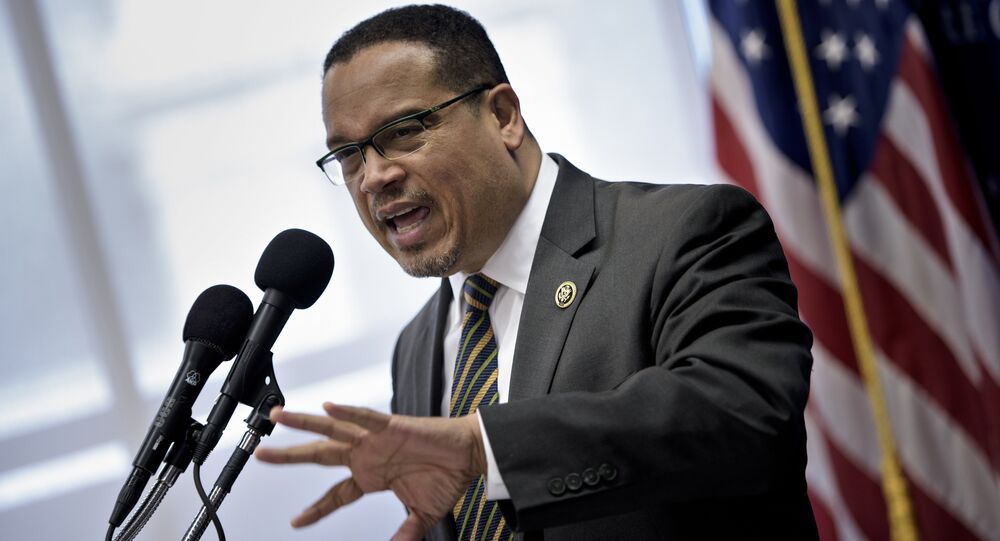 Reeling from a demoralizing defeat in the 2016 US presidential election, the Democratic National Committee convenes this weekend to determine who will take over Democratic leadership.

© REUTERS / Jim Urquhart
DNC Accuses Trump of Using Voter Fraud Claims to Distract From Alleged Russian Hacking
Anoa Changa, editor-at-large with the Progressive Army, and host of the weekly radio show The Way With Anoa, told Radio Sputnik's Brian Becker that the approaching battle between frontrunners Tom Perez and Keith Ellison is symbolic, in that it raises last year's confrontation between the progressive Bernie Sanders wing, and the Democratic establishment represented by Hillary Clinton that failed to keep Donald Trump from reaching the White House.

Changa attributes the party's dramatic failure in November of last year to the common perception that its core policies have drifted too far to the right. Even though the Democrats present themselves as liberal and progressive on certain issues, she said, in other crucial issues the party has swung far to the right, "particularly in the competition with Republicans for corporate interest and money."

​"The issue is the merit in which Democratic elites leverage power to separate themselves more from actual ordinary on-the-ground people and have enshrined the influence and needs of corporate America," Changa said during the Loud & Clear broadcast.

© Flickr / Brian Klug
Hacker Guccifer 2.0 Suspected of Cyberattacks on US Democrats Denies Links to Moscow
As soon as progressive candidate Bernie Sanders, who called for free higher education and holding Wall Street bankers accountable for damaging the country's economy, was defeated in the primary vote, the party immediately forgot about ordinary Americans and turned to rhetoric reminiscent of the Reagan era, accusing Russia of attempts to interfere in the election process, and calling Trump a ‘puppet' of Russian President Vladimir Putin.

It is essential that the Democratic party shift direction, Changa asserted. If Democrats continue on their present course, she warned, it will mean "the death of the party."

"There are so many protest groups that have been rising up, so many different groups organizing to get certain rights, that we've been litigating and trying to get in place for, at this point, hundreds of years. When you have this conflict, it's hard to see how the party can continue as it is," she said.

However, Changa expressed doubt that the party would actually move to the left, were Keith Allison to win.

"There is a lot of hope and optimism about what the DNC could be like under Keith Ellison. I almost feel like this is the way people were envisioning a Bernie Sanders presidency," she said. "Either way it goes, you still have the system that you have, you still have struggles in institutional barriers that exist."